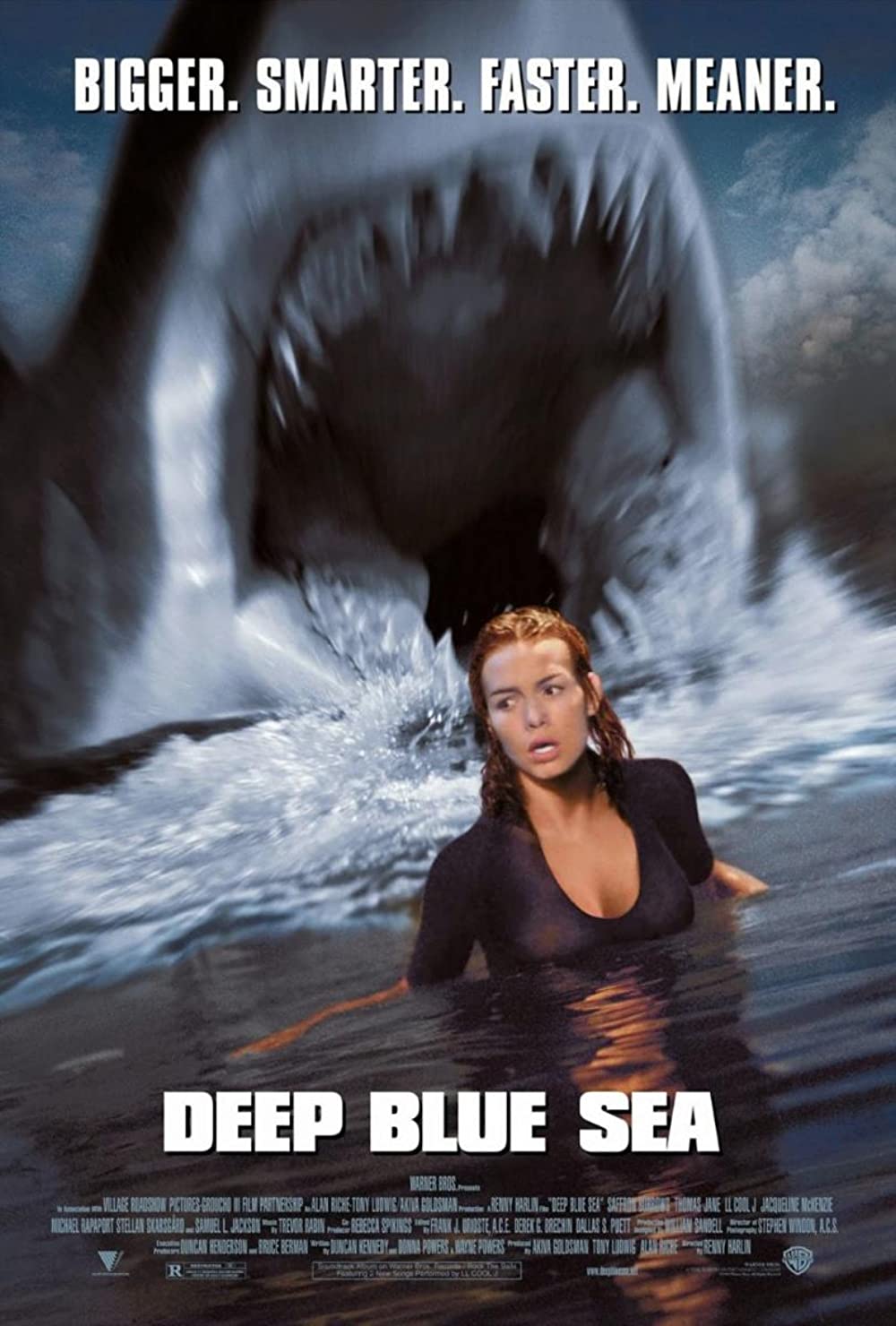 Deep Blue Sea, like the slasher movies it emulates by way of movies like Alien and Predator, is less a compelling narrative than it is a sort of delivery system for gruesome death scenes. And that’s fine. When a movie realizes its ambition, however high or low that ambition may be, it succeeds. It is in that spirit, then, that I present my loose, irreverent, spoiler-heavy review, in which we shall look at this movie in the way it seems to demand: by examining its death scenes.

First to go is Brenda Kerns (Aida Turturro) who dies when a shark throws a helicopter into the tower where she resides, causing the whole thing to blow up real good. It is decidedly that kind of movie. Jim Whitlock (Stellan Skarsgard) is the next to go, in a pretty cool scene that is nonetheless one of the least bloody. One of a team of scientists who has been experimenting on sharks in order to find a cure for Alzheimer’s Disease that may lie in a protein only found in the brains of sharks (this is the “whatever” science, the bare minimum explanation required so we can get on to the killing), Whitlock’s barely living body is used as a battering ram to break through the glass separating the underwater lab from the titular sea. This is after he has lost an arm to one of the sharks, their first sign of aggression against their human captors.

Jim’s death brings about the emotional breakdown of his apparent girlfriend, Janice Higgins (Jacqueline McKenzie), whose hysterical shrieking from this point forward is a pretty clear sign that she is the next to go, and the audience is not sorry to see it happen, since her role in the film serves no other function than this annoying hysteria. Her death is pretty straightforward: after falling into a pool of water while attempting to escape, she is pulled under by one of the sharks, who then jumps out of the water with her screaming body still in its jaws before diving back underwater to have its lunch in peace. Even the lesser characters in this movie get pretty excellent deaths.

This brings us to one of the greatest of all death scenes, in this or any other movie. If it hasn’t already been spoiled for you and you have not seen the movie, yet you are somehow still reading this review 22 years later, then I will not ruin it for you here. Trust me, this scene makes the whole movie worthwhile. Even knowing that it was coming, due to two decades of pop culture references to it, I couldn’t help but laugh out loud. You simply must behold the glory that is the surprise death of wealthy industrialist Russell Franklin (Samuel L. Jackson), and then reflect on his last line of dialogue before it happens. The circumstances of the death are so much funnier because of this context.

The next, and nearly last, death is that of Tom Scoggins (Michael Rapaport), who shows early signs of replacing Janice as this movie’s equivalent of Pvt. Hudson (Bill Paxton) in Aliens. I swear he was about to say, “Game over, man” in his third-act despair speech. Anyway, he gets ripped apart underwater, leaving one of his severed legs to twitch comically in one of the movie’s best moments. Rapaport’s character is especially interesting because of his instant friendship with Preacher (LL Cool J), easily my favorite character in the movie. Rapaport is a real-life hip-hop fanatic, and one can almost imagine the contract negotiation in which he agreed to a role in Sea only after finding out LL had signed on, and only then with the stipulation that his character get to be buddies with LL’s. Their chemistry isn’t particularly interesting, but I can’t fault Rapaport for wanting to have some comical scenes with the legendary rapper, who contributes no less than two original songs to the soundtrack.

LL is golden in this movie, and deserves to be discussed even though he miraculously escapes the death that seems preordained for him. In fact, not long before being trapped in the jaws of the final killer shark, he quips that “brothers never make it out of situations like this.” He then proceeds to just punch the hell out of the shark until it lets him go and survives! Simply amazing. This, by the way, is after initially escaping another shark in the kitchen it has trapped him in, blowing it up by throwing a lit Zippo into the gas-filled room, in one of the most implausible scenes in a movie bursting at the seams with them.

Finally, Dr. Susan McCallister (Saffron Burrows), the scientist who started all the trouble by making the shark’s brains bigger. She explains: “A larger brain means more protein. As a side effect the sharks got smarter.” Science! She is basically the cause of all the deaths around her, so she ultimately sacrifices herself to save the other two survivors, the awesome Preacher and the relatively bland shark expert Carter Blake (Thomas Jane).

Blake is the ostensible hero of the movie. We know this because he is big and muscular and is apparently such an expert on the big fish that he has figured out a way to pet sharks without his hand being cut up by their scales. In any other mainstream action movie, he and Susan would be the two survivors, after already having a sex scene during a lull in shark attacks. This, however, is no ordinary mainstream action movie. It is a B movie along the lines of the 1950s nuclear mutant monster movies, but with a mainstream action movie budget. In other words, glorious.