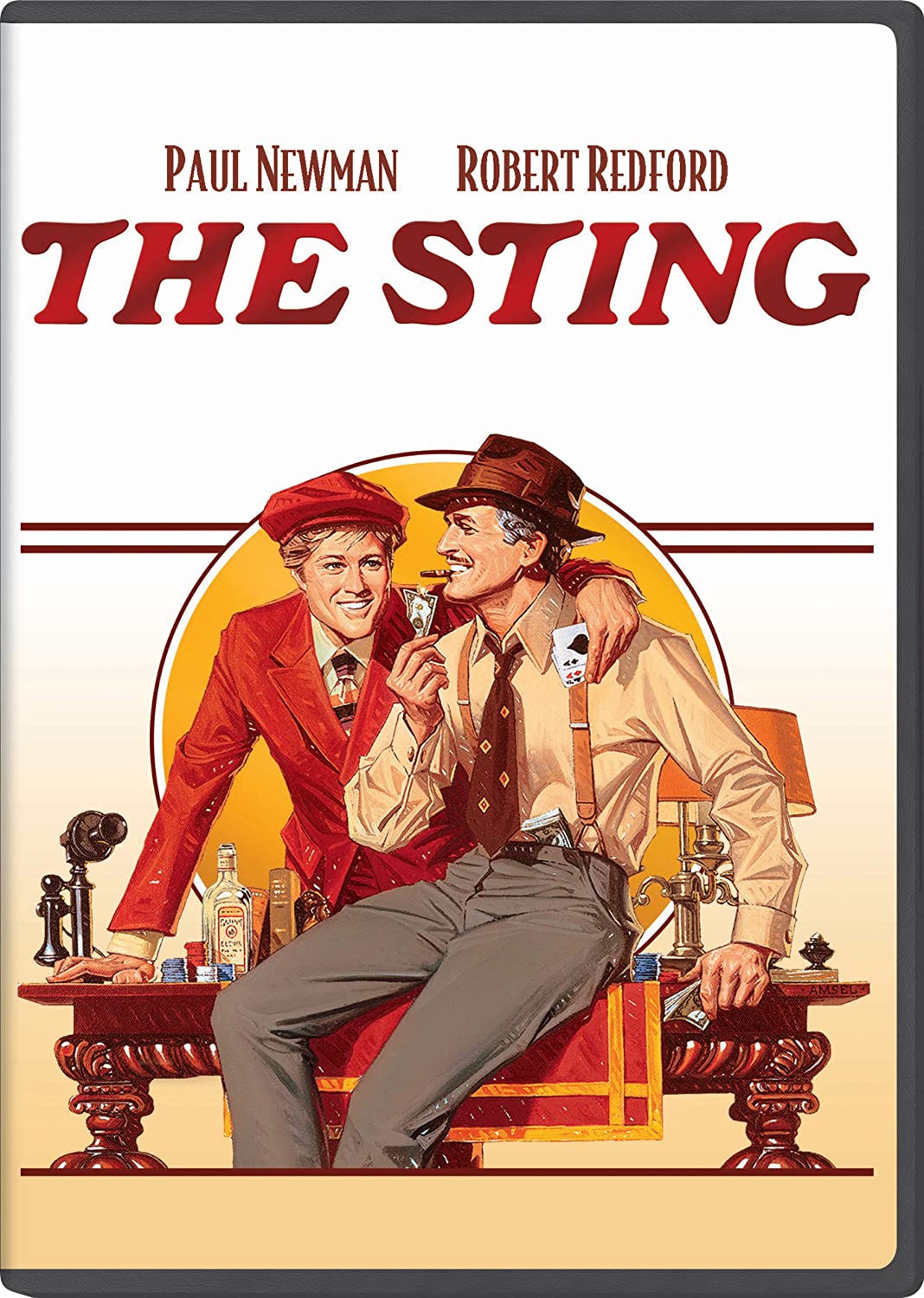 The Sting is one of those movies that makes cinephiles envious of anyone who is watching this gorgeous movie for the first time. A winner of 7 Academy Awards, this film also stars the tandem of Paul Newman and Robert Redford in their finest effort together. Noteworthy is that even with a wheelbarrow full of Oscars, there were none for acting, in spite of the stellar performances of Newman, Redford and the great Robert Shaw, who was at his snarling best in The Sting.

The movie was set in Chicago in the 1930’s, and the setting, sets, costumes and accessories were lush with color and style. The building of the time period detail is what pulled in most of the gold for this beautiful film. Not only were the actors and actresses sexy as Hell, even the littered alleyways and dive bars and diners in Chicago were charming.

Hooker (Robert Redford) and Luther (Robert Earl Jones) were two small time grifters who made a big hustle when they conned a passer-by out of a load of cash. That was the good news. The bad news was the money was mob money taken from a runner. There was Hell to pay, as Luther was killed and Hooker was being hunted down by the mob boss Doyle Lonnegan (Robert Shaw).

Hooker flees Chicago to meet up with Henry Gondorff (Paul Newman), who was a big-time con man. They formulate an elaborate plan to extract revenge for the death of Luther by running “The Big Con” on the dangerous and powerful Doyle Lonnegan. The remainder of the movie showcases the stages of this big and risky play, and the journey to the payoff is not what you might expect.

As is my wont, I will not rehash the plot or include a lot of spoilers. I can’t fathom any serious movie lover not having seen this masterpiece, but would hate to ruin it for any first time viewer. The Sting makes maximum use of plot twists and turns, and ultimately leaves the viewer with a satisfying, but totally unpredictable outcome. The orchestration of the plot was enhanced by the time period chapter separation artwork and the wonderful musical score featuring the music of Scott Joplin.

Robert Redford got most of the acting credit noise, and understandably so, but Paul Newman was always his magnificent self. The poker scene in the rail car was a beautiful and satisfying work of cinematography and acting. It is the greatest poker card scene in the history of cinema. The outcome is just as unexpectedly delicious and has to be watched and re-watched to be appreciated.

The supporting acting lifted the acting of the superstars to a new level of excellence. Special praise must be given to Charles Durning, who played the corrupt Chicago cop who was relentlessly on the tail of Hooker. I mean, if you are going to pay off a crooked cop, how dare you give him counterfeit money?

The Sting has it all. From the first, “Whoops, you got me”, to the very last, “Oh, Now I get it!”, like the trademark song from Scott Joplin, you are always within the spell of The Entertainer. If you thought Butch Cassidy and The Sundance Kid was entertaining and sexy, just get a load of this beauty. Again, I cannot say enough about the cinematography, sets and brilliant acting from the stars, and especially the supporting cast. There are just a few movies that approach the limits of perfection, and The Sting is one of them.

10.0/10.0 With the Goatesians Rating of One of the Most Beautiful Films Ever Made