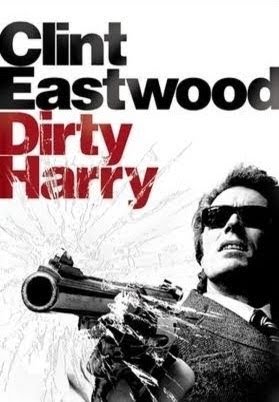 Dirty Harry and the homicidal maniac. Harry’s the one with the badge.

Only bullets can repair a broken system.

Limited almost exclusively to the fetishization of guns, which of course represent dicks in the 80s Action canon, of which this is arguably the pioneering film, regardless of its 1971 release date. The villain, Scorpio (Andy Robinson), has a weird, somewhat effeminate energy at times, and he seems to take almost sexual pleasure in the beating and domination of Harry in the nighttime park scene (“Let’s see the gun… my, that’s a big one”), but his motivations are never clearly defined beyond a sort of generalized evil madness and a desire for the now laughable ransom sum of $200,000. As for Harry himself, there is a strong impression, solidified throughout the series, that he enjoys righteous kills far more than any activity conventionally considered sexual.

Harry’s obvious love for his big gun and using it on bad men would seem to indicate something, but there is none of the smoldering intensity of, say, Dalton and Wade in Road House between Harry and his partner, Chico (Reni Santoni), or of John Matrix and Bennett in Commando between Harry and Scorpio. In fact, earlier in the same scene in which Harry and Scorpio first meet, Harry outright rejects homosinual thrills when they are apparently offered him by “Alice” in the park, though perhaps he is merely repressing his true desires with the same grim-faced stoicism he displays at all times.

Disappointingly low for a series that goes on to give the impression that Harry generally kills three or four guys before lunch on an average day. Somewhere around seven or eight deaths, not counting Harry’s wife or previous partner, both of whom are mentioned as having died before the movie begins. Scorpio gets three (or maybe four, if the liquor store owner didn’t make it), only one of which is an onscreen kill. Harry also takes down three or four (in all the excitement, I kind of lost track myself), including Scorpio.

The first of the Scorpio murders, which occurs directly before Harry’s introduction, is done via sniper rifle from a very high building, which gives a nice deep focus view of San Francisco, but that’s about as close as we get to any real novelty. Most of the relatively few people killed are taken down by a single shot.

“If a naked man is chasing a woman through an alley with a butcher knife and a hard-on, I figure he isn’t out collecting for the Red Cross.” (Harry, when the Stupid Mayor questions his motives for shooting a rape suspect. “I think he has a point,” the Stupid Mayor says, stupidly, after Harry walks out.)

“Now you know why they call me Dirty Harry: every dirty job that comes along.”

“Anybody can tell I didn’t do that to him.” “How?” “Cause he looks too damn good, that’s how.” (Harry, explaining to the Stupid Chief how much worse he would have fucked Scorpio up compared to what they’re seeing on the television.)

“I know what you’re thinking: did he fire six shots or only five? Well, in all this excitement, I kind of lost track myself. But being that this is a .44 Magnum, the most powerful handgun in the world, and would blow your head clean off, you’ve got to ask yourself one question: do I feel lucky? Well, do ya, punk?” (Way too long to qualify as a one-liner, but Harry clearly worked so hard on it I felt it was my duty to transcribe it.)

This is where Dirty Harry excels. The first thing on screen after the Warner Brothers logo is a “tribute to the police officers of San Francisco who gave their lives in the line of duty,” followed by a list of names dating back to 1878, all superimposed over the image of an S.F. Police badge. It doesn’t make a huge amount of sense for a movie in which not a single cop dies, but it serves to very heavy-handedly set a tone of respect for the police, who are the real victims of a society that doesn’t appreciate the sacrifices they make for us.

Harry Callahan (Clint Eastwood) is the personification of this underappreciated good cop, and is essentially the extra thin blue line saving the city from the ineptitude of the higher-ups and the bleeding-hearts. He is a lone wolf whose partners have the life expectancy of Spinal Tap drummers, both in his professional and personal life (taking into account his dead wife), and his manly anti-intellectualism is manifested when he is saddled with a new partner who is not only Mexican but also a “college boy” who majored in Sociology. “Oh, you’ll go far,” Harry sneers. “That’s if you live.” Harry is also revealed by a colleague to be one of those equal opportunity bigots that everyone finds so delightful these days. “Harry hates everybody,” this man cheerfully tells Chico. “Limeys, Micks, hebes, fat dagos, niggers, honkies, chinks, you name it.” “How does he feel about Mexicans?” Chico asks. “Especially spics,” Harry says with a wink. Our hero, folks!

Harry is very much a believer in the idea that it is better for a thousand innocent men to be imprisoned than one guilty man go free. “These loonies out here, I’d throw a net over the whole bunch of them,” he says while patrolling a seedy part of town in search of Scorpio. Shortly afterward he is beaten by a vigilante mob who take him for a Peeping Tom. He then insists on letting them go, over Chico’s protests that they assaulted a police officer, because he likes their style. If it wasn’t for the badge, Harry seems like the kind of guy who would definitely be out righteously beating people up with guys like these, or maybe it’s that he feels guilty over the fact that he actually is a bit of a Peeping Tom, as evidenced by the later scene in which he is momentarily distracted from surveillance work by an apparent sex party in the same building. “You owe it to yourself to live a little, Harry,” he mutters as he puts the binoculars back up to his eyes, presumably feeling he has already paid for the crime, so he might as well enjoy it.

The stupidest of the Stupid Political Content comes after Scorpio is captured, when Harry guns him down in the middle of a football field and he snivels and whines about his right to an attorney and medical attention. Because of Harry’s contempt for warrants and other proper procedure, all the evidence of Scorpio’s guilt is inadmissible, due to college boys and their stupid laws about probable cause and human rights and police brutality and all that liberal bullshit. Ultimately, Harry has no choice but to go rogue, throwing his badge in the drink right along with Scorpio’s corpse before walking off into the sunset.

Basically there are three of them, each stupider than the last. There is Lieutenant Bressler (Harry Guardino), who dares to speak ill of Harry’s switch blade, saying, “You know, it’s disgusting that a police officer should know how to use a weapon like that.” There is the actual Chief of Police (John Larch), who keeps saddling Harry with doomed partners. And then there’s the previously mentioned Stupid Mayor, who exists only to kowtow to the demands of scum like Scorpio and to give stupid orders to Harry, stupidly.

It’s actually pretty great. Pauline Kael famously called it a deeply immoral fascist fantasy, and she was not wrong, but in the same review even she acknowledged how well-made it is. Some of the dialogue is clunky enough that even Clint’s grim-faced commitment can’t quite sell it, but mostly it’s made up of terrific scenes like the foiled bank robbery that introduces us to Harry’s beloved pistol, or Harry’s unconventional method of talking down a suicide jumper, which must have been an inspiration for Riggs’s even more reckless technique in Lethal Weapon. Don Siegel’s sure-handed direction and Lalo Schifrin’s propulsive score keep the entertainment value crackling, and Andy Robinson’s wonderfully unhinged performance as Scorpio is a delight that might hurt any other movie with its over-the-top quality, but fits the tone of this one perfectly.

Above all, Dirty Harry really pioneered some of the most important tropes of 80s Actions cinema, with its Stupid Political Content, Stupid Chiefs, and the lone wolf cop who breaks all the rules but gets results, dammit! Like Death Wish and First Blood, the other two parts of the Holy Trinity of pioneering 80s Action franchises, this is a strong standalone movie that would spawn increasingly ridiculous sequels. 50 years on, it holds up quite well.

Only if you count the one coming out of Harry’s big gun.

The .44 Magnum is the most powerful handgun in the world, and would blow your head clean off…Punk.