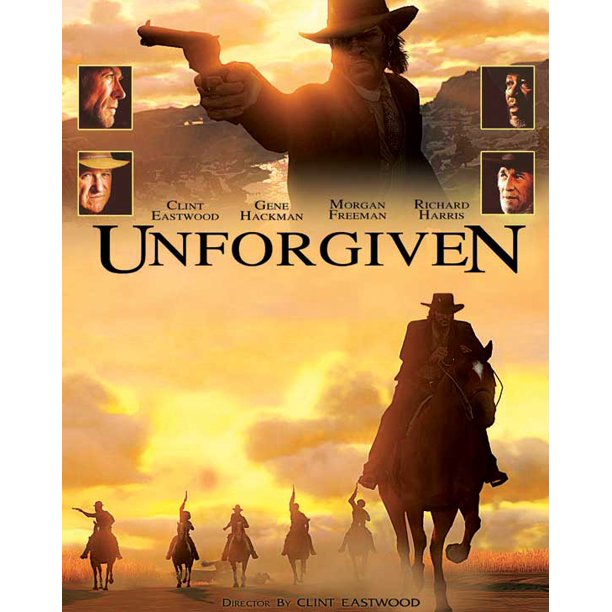 Having a small pecker is no joke

For whatever reason, the Western became very sick in the 1970s, one of its shuddering last breaths taken when a scar-faced Clint Eastwood jumped behind a Gatling gun to let loose merry hell in the brilliant Outlaw Josey Wales.

There was nothing of much note after that, the genre pretty much given the coup de grace by the almighty flop Heaven’s Gate at the beginning of the new decade.

Of course, there were attempts at revivals, Clint pretending to be Death in the underwhelming Pale Rider (1985), but the less said about hip nonsense such as Young Guns (1988) the better.

And then Clint, bless his little stirrups, triumphantly rode back into town as the aging killer Will Munny in 1992’s Unforgiven.

Bookended by a gorgeous, multi-hued vista depicting Will in silhouette at the graveside of his angelic wife, this revisionist western focuses on the terrible price of violence.

“It’s a helluva thing killing a man,” he mutters at one point. “Take away all he’s got and all he’s ever gonna have.”

Will learned this lesson long ago but he’s about to learn it all over again when the cocky Schofield Kid (Woolvett) turns up on his muddy Kansas doorstep with a $1000 proposition. He wants Will’s help in tracking down two cow(ard)boys who repeatedly slashed a hooker’s face in Wyoming. Will, now a repentant teetotal widower with two young children, is reluctant to get involved, but the perilous state of his failing hog farm forces his hand.

“Did Pa use to kill folks?” asks his daughter as he rides away.

On the way he stops off to visit his old partner in crime, Ned Logan (Freeman), who is equally hesitant about going after the bounty. “We ain’t bad men no more,” he tells Will. “Shit, we’re farmers.”

But a man’s gotta do what a man’s gotta do and it’s not long before the trio is heading for Big Whiskey. Both Will and Ned are rusty as hell, Will struggling to stay on his horse while Ned bitches about missing his comfy bed. Having the Schofield Kid along for the ride isn’t helping, either.

“How many men you killed?” he asks Ned. When Ned gets needled at the question, the Kid shrugs. “Well, I gotta know what kind of fella I’m riding with. Case we get into a scrape ‘n’ all.” Unable to keep the pride out of his voice, he informs Ned he’s gunned down five.

And this age-old mistake of equating masculinity with the ability to dole out violence is what Unforgiven is all about. Men just love giving the impression they’re handy with a gun or their fists, even though such behavior is ugly, self-defeating and frequently leads to events spiraling out of control.

Take English Bob (Harris), the British-born gunfighter who arrives in town with a biographer detailing all his brave adventures. He likes to paint romantic pictures of how he saved a woman and shot dead seven men, but it’s later revealed he’s just a drunken coward who shot an unarmed, badly wounded man.

Time and time again throughout Unforgiven manliness and the ability to kill are intricately connected, a fatal myth that has dogged mankind since crawling out of the primordial swamp.

In actual fact, we have a fear of aggression, a safety switch that is a normal part of our emotional makeup. Studies have backed this up, one detailed analysis of a WW2 battle in the Pacific showing that out of more than 300 American combatants only 36 managed to fire a shot. We don’t like violence and we kick against it. Or as one of Big Whiskey’s deputies says while unenthusiastically loading his revolver to enforce the town’s anti-gun law: “Anybody can be scared.”

And yet somehow we can’t quite shrug off the persistent lie that a Real Man has to be able to kick ass.

Will, meanwhile, is trying to convince himself that his latest bout of trigger-pulling is an anomaly. He knows he used to be a ‘no good sonuvabitch’ but he clings to his wife’s redemptive influence, which has seen him not draw a gun on a man in more than a decade.

Indeed, he’s haunted by his murderous past.

“You remember that drover I shot through the mouth and his teeth came out the back of his head?” he says to Ned. “I think about him now and again. He didn’t do anything to deserve to get shot. At least nothin’ I could remember when I sobered up.”

When they arrive in Big Whiskey, we start to get detailed pictures of the men involved through their actions. Little Bill (Hackman), the mean as a rattlesnake sheriff, is still in thrall to violence. It’s his language, the thing he knows best because he sure as fuck knows shit about carpentry. Ned, however, has lost the taste for shooting people while the Schofield Kid is desperate to prove his mettle.

His bloodlust proves he’s anything but a ‘broken-down pig farmer’ but also suggests that for some men violence is akin to a bone-deep affliction, such as alcoholism. You might think you’ve rid yourself of it, but in reality it’s lying dormant just waiting to grab you screaming by the throat again.

Unforgiven deservedly won four Oscars, including two for Eastwood and one for Hackman. Somehow David Webb Peoples’ superb, multi-faceted, elegiac screenplay (in which everything is built on a hooker’s snigger about a tiny pecker) missed out.

As far as I know, Unforgiven remains the last word on quality westerns, and the moribund genre quickly slumped back into irrelevance once Clint hung up his guns.

Dave Franklin also writes fucked-up crime novels like Riders on the Storm and Other Killer Songs.