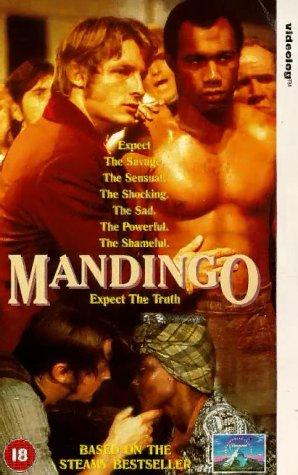 Let the good times roll in the Antebellum South

What the hell are these cats up to? Falconhurst is a dilapidated plantation run by the tyrannical aging widower, Warren Maxwell (Mason), and his limping son, Hammond (King). Their slaves try to stay alive under an increasingly unstable regime, often being forced into impossible choices. Into this toxic mix comes Hammond’s new wife, the drunken, poisonous Blanche (George), and a hulking slave prize fighter, Mede (heavyweight boxing champ, Norton). If that sounds like there are not many laughs to be had, you’d be right.

Do I dig the threads? Well, despite being slaves, I’d say the black folk are dressed a hell of a lot better than in Super Fly. Sartorially, there’s nothing to snigger about here. Somehow, I sense that’s not much consolation for a life of unremitting degradation.

How are the bitches and hos treated? In short, horribly. Oh boy, do the sisters have a tough time in this one. I doubt there’s any blaxploitation out there that can match Mandingo’s sheer misogyny. Dinner table conversation offers tips on how to dampen down the odor of black pussy. ‘Wenches’ are expected to happily offer up their virginity to their master. Said master will often beat and rape you anyway. Or as one white owner puts it as he vigorously applies his belt to the buttocks of a bent over, terrified teenager: “Makes a man feel good. She likes it, too. Don’t you, pretty wench?”

Newborns, otherwise known as ‘suckers’, are taken from their moms and sold for a healthy profit. Once you’ve given birth twenty-four times, you might get lucky and be declared ‘bred out’, enabling you to take a well-earned break and serve house meals instead.

Interestingly, while it’s obviously far easier to be born white, Blanche doesn’t fare any better. Raped by her brother at thirteen, she is also treated like property in a nakedly patriarchal system. Marriage makes no difference, Hammond’s wedding night discovery of her lack of a hymen prompting him to furiously label her ‘disgusting’. There’s no way back and all she can do is drown her sorrows while her new hubby diddles the black help instead.

Indeed, it’s the norm for a married white man to have a harem of wenches. Just don’t flaunt ’em. “She wants you have ’em,” Warren tells his son. “Saves her from having to submit. When she do submit, though, keep on yer shirt and drawers. Plagues a white lady almost to death to see a man naked.”

Apart from Blanche, Mandingo’s other white women are pretty much all prostitutes or brothel madams. Let’s face it, this wasn’t a good time to be female.

Are any hard drugs injected into eyeballs? Given Mandingo is set in the 1860s, there’s no chance of zoning out with a crack pipe. These poor bastards can’t even get their hands on any booze. One child (that the boss happens to be using as a footstool in an ignorant bid to cure his rheumatism) manages to sneak a swig from a half-finished glass of liquor. That’s as high as any of the brothers get.

“Y’all don’t think deep down that peckerwood don’t know we as human as he is?” An uppity slave is getting some dangerous ideas about the boss.

“We was free and you brought us here in chains. Well, now we’re here and you just better know: This is as much our land as it is yours. And after you hang me, kiss my ass.” Having just killed four whites, the aforementioned slave addresses his looming executioners, striking fear into every last one of them.

“You’re strange for a white man.” A wench’s timid observation about Hammond after he admits his cousin’s fondness for whipping conquests makes him feel sick.

“Smells good to white noses.” After a wench complains about a foul-smelling concoction being poured into her bath, the housekeeper reveals the benefits of the abovementioned pussy odor killer.

“Congratulations, Mede. Not every black man gets the chance to kill another black man. Kill a few more and your skin may turn white.” A fellow black gives his verdict on Mede’s victorious prize fight.

“I thought you was somehow better than a white man, but you is just white.” Mede finally realizes there’s no such thing as decent white folk in his neck of the woods.

Does it have funky music? Over the opening credits Muddy Waters supplies a sparse, mournful and entirely appropriate song called Born in this Time. “I’m so tired, but I can’t take any rest,” he sings. “My back is so worn and my hands feel like stone.” However, on the basis of the movie’s next two hours, back-breaking work is the least of a slave’s worries.

Is there a racist cop keeping the brothers down? What the movie makes clear is there is no law. Whatever problems that crop up are dealt with, shall we say, in house. This means Warren Maxwell embodies the legal system. “Slavery was ordained by God,” he says, although I suspect this is bit of a fib.

With his hatred of abolitionists and fear of ‘nigger risings’, it’s fair to say Warren’s racism is ingrained. Indeed, he could teach Himmler a thing or two. James Mason is a one-note but convincing villain, devoid of doubt and so nasty he probably doesn’t even consider himself a bad man.

Is Mandingo any good? Now that’s a tricky question. Blazing Saddles came out a year earlier and deserves rich credit for the way it poked fun at the absurdity of racism, but Mandingo makes its points through a graphic depiction of slavery. No, scrub that, a fearless depiction of slavery. There’s an authentic ugliness to its language and behavior, so much so that it makes a latter-day effort like Django Unchained appear lightweight. This is the real deal, folks, served up in the mid-1970s when cinemagoers were treated as robust adults.

Mandingo convincingly portrays the Deep South as a time of superstition, ignorance and hatred. The direction’s workmanlike and the script’s not bad. The performances are good, although Norton as the titular character sports the same half-dazed expression whether he’s biting a black dude to death in front of cheering white onlookers, having his cock fondled by an inquisitive German woman at a slave auction or being forced to pleasure Susan George. I guess that takes a certain mindset.

There’s plenty of titillation in this slavesploitation, but it’s overwhelmingly dispensed in the form of coercion and flat-out abuse. Indeed, the idea of a half-dressed Susan George taking a whip to the black sexual competition sounds great, but turns out to be just as depressing as all the other incidents of sexual cruelty.

Mandingo remains a divisive, grim watch, sometimes playing like a lurid soap opera while at others wandering into the territory of Rosemary’s Baby. I’d have to recommend it, though, partly on the basis that it’s The Kind Of Film That Wouldn’t Get Made Today.

Do I now have a Tarantinoesque urge to be black? Christ, no! This is pure horror from start to finish. The only blacks with cushy jobs are the young kids employed as fans, candleholders or footstools. Otherwise you will have a slave trader peering up your ass to check for hemorrhoids. Learning to read is not recommended unless you fancy practicing your new skill with only one eye. Do I need to go on?