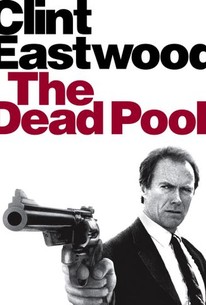 Early on, we see a young Jim Carrey (as rock star Johnny Squares) prancing around in a leather outfit to the tune of “Welcome to the Jungle,” but that’s only as gay as any average heavy metal music video from the 80s (which is to say, plenty gay). Harry continues to show a disappointing interest in women, who continue to throw themselves at him, though none so egregiously here as Sunny in Magnum Force. Really, there is an almost perverse anti-homoeroticism in this one, as Harry is seen at the gym with his ripped, sweaty new partner, Al Quan (Evan C. Kim), only to ignore the potential for Greek Style bonding in favor of making eyes at some hot blonde working out nearby. He does eventually impale the Big Bad with a harpoon, though, which is at least a little homoerotic.

16 total onscreen kills, with more than two-thirds of these (11 total) belonging to Harry. He has fully twice the kills of everyone else in the movie combined, which is exactly as it should be.

There is a gimmick throughout that the methods of murder used by the eventually revealed Big Bad mirror scenes from the films of horror director Peter Swan (Liam Neeson and his ridiculous ponytail), implicating Swan in the killings, but the methods themselves are not particularly novel. Besides Johnny Squares, the Axl Rose stand-in played by Carrey, there is another sort of novelty victim in the pretentious film critic Molly Fisher (Ronnie Claire Edwards), who badmouths Swan’s work with much of the same vitriol as Pauline Kael reserved for the Dirty Harry series, and is subsequently brutally murdered. Most novel of all, though, is the setup to the notorious remote control car chase, when talk show host Nolan Kennard (Bill Wattenburg) is blowed up real good by an explosive-laden remote control car under his own full-sized vehicle. Death Wish V: The Face of Death later upped the silliness ante with a remote controlled soccer ball. The cocaine was very good in those days, it would seem.

“Opinions are like assholes; everybody has one.” (Not sure if this is original to Harry, but if so, holy shit!)

“Do you have any kids, Lieutenant?” Harry asks Lt. Ackerman (Michael Goodwin) after a particularly prime Stupid Chief moment. “No,” Ackerman replies, bewildered, setting Harry up for the zinger: “Lucky for them.”

“I’ll kick your ass so hard you’ll have to unbutton your collar to shit.”

“You forgot your fortune cookie; it says, ‘You’re shit out of luck.'”

“At least the guy went out with a bang.” (Insensitive Quan with the zinger again, at the scene of the remote control car-bombing)

Best of all, though, is Harry’s response to the question of where Harlan Rook (David Hunt), the man he has just harpooned to a wall, might be found: “He’s hanging out back there.”

The Dead Pool opens on a rare note of political success for Harry in the arena of the rotten liberal court system, as Samantha Walker (Patricia Clarkson) reports on the conviction of mobster Lou Janero (Anthony Charnota), which was made possible by evidence Harry collected, “for once” within the bounds of the bleeding-heart legal system. The SFPD is quick to leverage this positive media coverage to improve public relations.

To this end, they also saddle him with a new (almost) doomed partner, this time an Asian man. “I think teaming Callahan with a Chinese-American will be very good for the Department’s image,” Stupid Ackerman beams stupidly, at which Captain Donnelly (Michael Currie) literally facepalms. Does the Chinese cop know kung fu? Oh, you bet he does, and Harry repeats Ackerman’s line for comic effect when he later demonstrates this in a shootout.

Most of the Stupid Political focus is on the media and the nature of celebrity in this one, with Harry taking a stand against media overreach by grappling a new camera away from its operator and throwing it off the pier when Samantha tries to force an interview with Johnny Squares’s grieving girlfriend. Samantha has the whole incident on video, of course, representing a whole new threat to Good Cops like Harry at the hands of the bleeding-hearts and pencil-pushers. Harry later explains his view of the media over dinner with Samantha: “You people are always interested in death and mayhem, but you don’t care who you have to steamroll over to get the story!” However, it is the media (in the form of Samantha, of course) who ultimately informs Harry of the celebrity “Dead Pool” and puts him on the trail of Peter Swan and his hilarious ponytail.

Harry confronts Samantha about publishing the Dead Pool before bringing it to the police, sounding almost like a Stupid Chief himself with his talk of “innocent people getting hurt” and “responsibility to the public.” This is the beginning of Samantha’s evolution from blood-sucking media vulture into true human being, which continues as she experiences violent trauma firsthand in a shootout between Harry and Janero’s goons. She later helps talk Gus Wheeler (Louis Giambalvo) out of setting himself on fire, instead of “just going for the exclusive.”

The focus on media and celebrity is no more subtle than the themes of any Dirty Harry movie, with Harry nearly blowing away his first couple of autograph-seeking fans and Samantha explaining Andy Warhol’s 15 minutes of fame concept to Harry (and us morons in the audience) on their second date. To drive the point home, Harry ends the film by walking away in disgust (as always), this time from a pack of hungry reporters who have just arrived at the scene.

Never only one, not in a Dirty Harry movie; they come at old Inspector Callahan in pairs, at least. The orders come from the actual Chief, of course, but Harry mainly has to grudgingly deal with Ackerman and Donnelly, the latter of whom is on his ass in a hurry after his first shootout with Janero’s goons, in which he wrecks his car (and shoots a fleeing, unarmed man in the back, but, like, whatevs). “That’s the third goddamn car you’ve trashed this month!” Donnelly splutters. “Lou Janero,” Harry calmly replies. “It’s his men who shot up the car, why don’t you send him the bill?” “Very funny, Harry. See how funny it is behind a desk, because you’re off the street, effective immediately… at Lt. Ackerman’s request, with the Chief’s approval. It’s for your own good!” Prime Stupid Chief stuff, from the franchise that started it all.

Sudden Impact had a farting bulldog, which was deeply silly and something from which the movie had to struggle to recover. Likewise, this one has the aforementioned (and infamous) remote control car chase, a Bullitt-aping setpiece that is also deeply silly and much longer than the flatulent canine’s contributions to the previous movie. It’s also hard to argue that the good things about this one can match the merits of any of the others. It is undoubtedly the worst of the bunch, but it’s also the shortest, and there is an undeniable entertainment value to even its worst moments (especially that ridiculous car chase), not to mention an early scene of young Liam Neeson and young Jim Carrey, both with absolutely atrocious 80s hairstyles, yelling at each other like Harry and a Stupid Chief on the set of a bad horror movie. It gets better than this, sure, but this is still pretty good.

“Smoking can cause cancer, and anyone that smokes as much as you do is one dumb sonofabitch.”