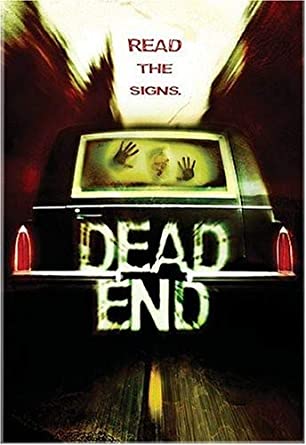 Stay on the road, Dorothy

I’ve been reviewing Christmas Movies for Ruthless for over a decade now. Needless to say, the well is about to run dry. I refuse to review the Hallmark or Hallmark type sappy dreck. A few is enough. However, I did not want to completely abandon my unhinged and relentless pursuit of this obsession. Therefore, I have watched another Christmas horror/slasher movie, and will review it.

Dead End is much more a horror movie than a Christmas movie. The only attachment to Christmas is that Frank and his family are driving on Christmas Eve (at night, of course) to his in-laws for their traditional Yuletide holiday. This year, however, Frank decides on his own to take a “short cut” away from the Interstate. No one notices, until later. This is a horror movie after all, and horror movies are all about detachment, oblivion to the obvious, and above all, making bad decisions. As far as the latter goes, this movie may be the Holy Grail of this particular trope, as every decision made is hilariously a foot in the grave for someone.

I can’t get really deep into the plot, but Frank gets drowsy on this lonely road in the forest and almost collides with an oncoming vehicle. After much angst, banter and rhetoric, they proceed on their way, but things immediately get stranger and stranger as they encounter a girl in white cuddling a baby. From this point, events get even more bizarre as the ill-advised short cut road becomes a never-ending destiny to horror and death.

O.K., while the movie grinds its way to the inevitable conclusion, you may have been able to suspect what is really going on. However, the acting is so good and the dialogue is so engaging, that the viewer is kept off balance and away from thoughts and speculation. Ray Wise and Lin Shaye play off of each other like the seasoned married couple that they are. During the ordeal the family dysfunction is revealed to levels of snickering grimaces, especially considering their horrific plight.

Dead End, on one hand seems to drag on drearily, but on the other hand I never wanted it to end. Again, I will not spoil it, but the inevitable, predictable, but delicious demise of the victims was not cringe-worthy, but quite satisfying. The ending, the pay-off, while it might have been predicted, was well done and not in any way disappointing. While not a typical sappy Christmas Movie, Dead End was a fulfilling horror film, around Christmas time, and one that I was glad that I watched.

7.5/10.0 With The Goatesians Rating Of Better Than Average Christmas Horror