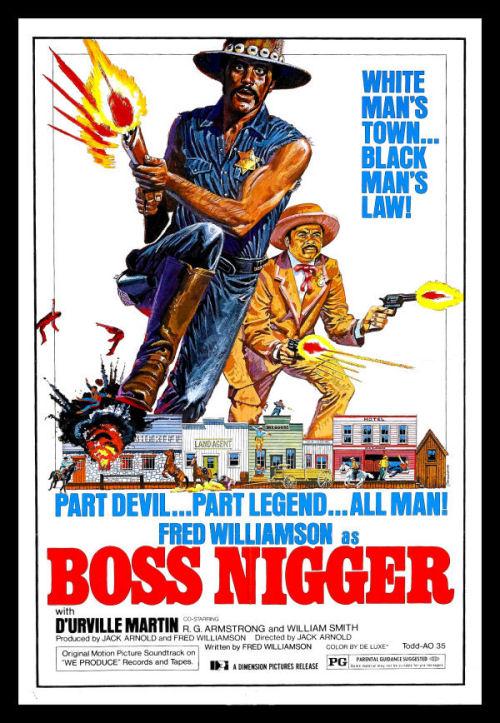 What the hell are these cats up to? Two fearsome bounty hunters Boss (Williamson) and Amos (Martin), who kill up to five outlaws at a time, take a break from their day job to forcibly outwit the piss-weak, double-dealing mayor of San Miguel and become the law. As you can imagine, the vast majority of locals are none too pleased about having a black sheriff and deputy, especially the bandit leader Jed Clayton (Smith). Please insert whatever Blazing Saddles quote you wish.

Do I dig the threads? Yeah, there’s nothing wrong with 19th Century fashion. Boss looks cool, clad in black and always chewing a cigar. He also has a particularly thick and manly moustache, the likes of which I couldn’t match even in my dreams. The shorter, tubbier Amos doesn’t fare so well, opting for a velvety/straw boater sort of setup.

The women all wear those long, flowing dresses that leave everything to the imagination. Mmm…

Is there a racist cop keeping the brothers down? The mayor obviously doesn’t like blacks. Or as he succinctly puts it: “How in hell am I gonna explain to the good people of this town there’s a nigger for sheriff?” He works with Boss and Amos, but he’ll shoot them if necessary.

How are the bitches and hos treated? The pair rescue a lovely black woman called Clara Mae after her wagon is attacked by outlaws. Although her pa has just been murdered, she can’t help swooning in Boss’ manly arms. He gives her a new dress and treats her with unfailing courtesy throughout.

He’s even polite to the prim (but gorgeous) schoolteacher, Miss Pruit, when she happily relays the fun she had in watching her family’s slaves sing and dance. Later he plants a great big smacker on her lips and says: “That’s just to satisfy your curiosity.” He then turns on his heel, leaving her with a heaving bosom.

The chief villain, who looks a bit like a young Jack Palance, manages to up the ante by unimaginatively shooting Clara Mae dead after she fails to agree to rape.

Are any hard drugs injected into eyeballs? They don’t even drink.

Best jive talk: Given it’s set in the 19th Century, there’s not much to report here, except I’ve never heard the N-word, as all those lovely, politically correct folk like to say, used so many times in a movie. A conservative estimate would be 120. It’s like listening to Richard Pryor’s early standup.

Most of the juicy stuff comes from the racist townsfolk, who are not exactly thrilled by the arrival of the ‘black devils.’

“I wonder if the black comes off.” A man who’s been harassing a laundry-carrying woman on the street spies Amos and is immediately up for another bit of fuckwittery.

“Hey, nigger, come here and shine my boots.” Probably not the best thing to say to a black man in a bar.

“Suppose they start pestering our women folk?” Hell, you’re not surprised that cliche got trotted out, are you?

Does it have funky music? Well, we’ve got an upbeat theme song that isn’t particularly truthful. “Black man in a white man’s town/He’s got trouble/Get in his way/He’s gonna cut you down.” Yeah, fair enough, but then the chorus starts insisting ‘he’s so bad’ when the movie quite clearly shows Boss to be a man who is kind to children, treats women well, is courteous and respectful to non-racist white folk, and only kills outlaws.

The rest of Boss Nigger’s instrumental music is funky and not bad at all, but it struggles to fit into the Wild West setting.

Are there any pimps roaming the hood? No. Best we get is a sassy hooker in the saloon.

Is Boss Nigger any good? Along with Titanic 2, it’s got one of the most memorable titles I’ve ever stumbled across in my long, shameful history of staring at illegally downloaded flicks. Unfortunately, it doesn’t live up to it. It’s a strange little movie that keeps veering between parody, homage, comedy and straight up (but mostly bloodless) violence. It looks good, but the editing’s poor with shot people taking about a second to react.

Written by its star, it’s similar to Black Caesar in that it’s driven by a desire to get back at whitey. I think Boss is Williamson’s play on The Man With No Name, except he’s black and got a name. This strapping six-foot-three, ex-ball player is a handsome, reasonable actor and offers glimmers of talent. He probably deserves better material. However, his co-star Martin is just as bad here as he was playing a pointless preacher in Black Caesar.

So although Boss Nigger is simplistic, predictable nonsense, I imagine such movies still helped kick down mainstream doors for black talent.

Do I now have a Tarantinoesque urge to be black? Boss and Amos don’t really have any fun, barring making white men hold hands in public and skip along the sidewalk, shooting a large number of racists or just throwing whitey in clink all the time for the most minor of misdemeanors. There’s no drinking and whoring. Only Amos manages to dip his wick with an unappealing, Mexican chubster, although as he loves ‘fat women’ I guess he’s happy.

Perhaps the most appealing bit is Miss Pruit, no doubt a pillar of the community, going gaga for black cock as soon as Boss rides into town. This is what I expect, partly because it allows me to indulge my masochistic insecurities that such an ultra-respectable woman would always prefer a black man’s giant appendage over my teensy white maggot.