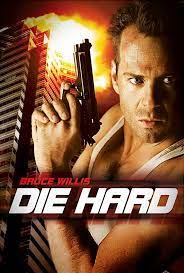 A bare-footed, vest-wearing cop takes on a group of crack terrorists

You know Alan Rickman’s done his job remarkably well in Die Hard when he plunges to his death from a high-rise building and we feel a bit sad.

Unlike Kong, it wasn’t beauty that killed the charismatic beast, but a combination of old-fashioned greed and sheer bad luck.

Rickman plays Hans Gruber, a debonair German terrorist who has a well-trimmed goatee and lovely hair. He’s impeccably dressed and radiates intelligence and wit. He speaks at least two languages, reads Time and Forbes magazines, and can talk about Alexander the Great. He does not rattle easily. There’s no strut to his walk but definitely a bit of a swagger because he knows he’s a cultured, confident man about to get bloody rich.

Let’s face it, for a fair chunk of this 80s action classic, this suave bastard makes terrorism sexy.

Perhaps that’s why he vehemently objects to John McClane’s estranged missus calling him a ‘common thief’ when she sees him stuffing his share of $640 million in untraceable bearer bonds into a bag.

Image is important to this glamorous villain. Looking good, cordial conversation, knowing what’s going to happen, and not launching into spittle-flecked rants are all evidence he’s in control. Crime, especially this kind of hi-tech, high risk adventure, appeals because it’s a challenge, one that he wants to be seen effortlessly besting with bags of charm.

Saying that, he’s no ponce. He won’t burst into tears when things go awry. He will decisively act and that can mean a bullet in the brain for anyone who runs out of that lifesaving quality known as usefulness. Just look at the way he dispatches the corporate boss. First, he asks for a computer code to access the goodies, but when an answer isn’t forthcoming, Hans employs his well-honed fondness for understatement.

But ruin it he does, even though the boss is obviously a nice, dignified man who deserves a bit more leeway. To be honest, the coldblooded execution comes as a surprise. Suddenly we know Hans is no bluffer and there’s a core of steel beneath his well-groomed exterior and air of mystery. “Dispose of that,” he tells a subordinate, glancing without regret at the corpse.

Shortly afterward he’s enjoying a plate of finger food in front of the company’s remaining workers before revealing their boss’ demise. “I wanted this to be efficient, co-operative, professional,” he says.

And we believe him. The grubby act of murder does somehow seem beneath him, but just as he smugly tells them “We have left nothing to chance” the elevator doors pop open to reveal a dead terrorist strapped to an office chair with a jokey message scrawled across his chest.

Hans is not impressed. This was not in his meticulously drawn up plan that involved everything from recruiting a computer genius to second-guessing the actions of the FBI. The unseen John McClane, that supreme fly in the ointment, is already threatening to make him look silly in front of his heavily armed subordinates.

Hans, however, manages to keep a lid on his boiling emotions. During their first chat on the radio, we can’t help being amused when he refers to this irritating NYPD cop as a mysterious party crasher.

“Who are you?” he probes. “Just another American who saw too many movies as a child? Another orphan of a bankrupt culture that thinks he’s John Wayne?”

When he finally bumps into his smirking nemesis, he has to pretend to be a terrified Nakatomi employee. Sure, it’s evidence of his quick thinking (of which there are many examples throughout), but there can be little doubt he finds the whole pretense of begging for his life humiliating.

It’s more evidence of his lovely hair being ruffled.

After this starring turn Rickman went on to play other villains, most notably the Sheriff of Nottingham in Robin Hood: Prince of Thieves, but none were quite as on the money as this one.