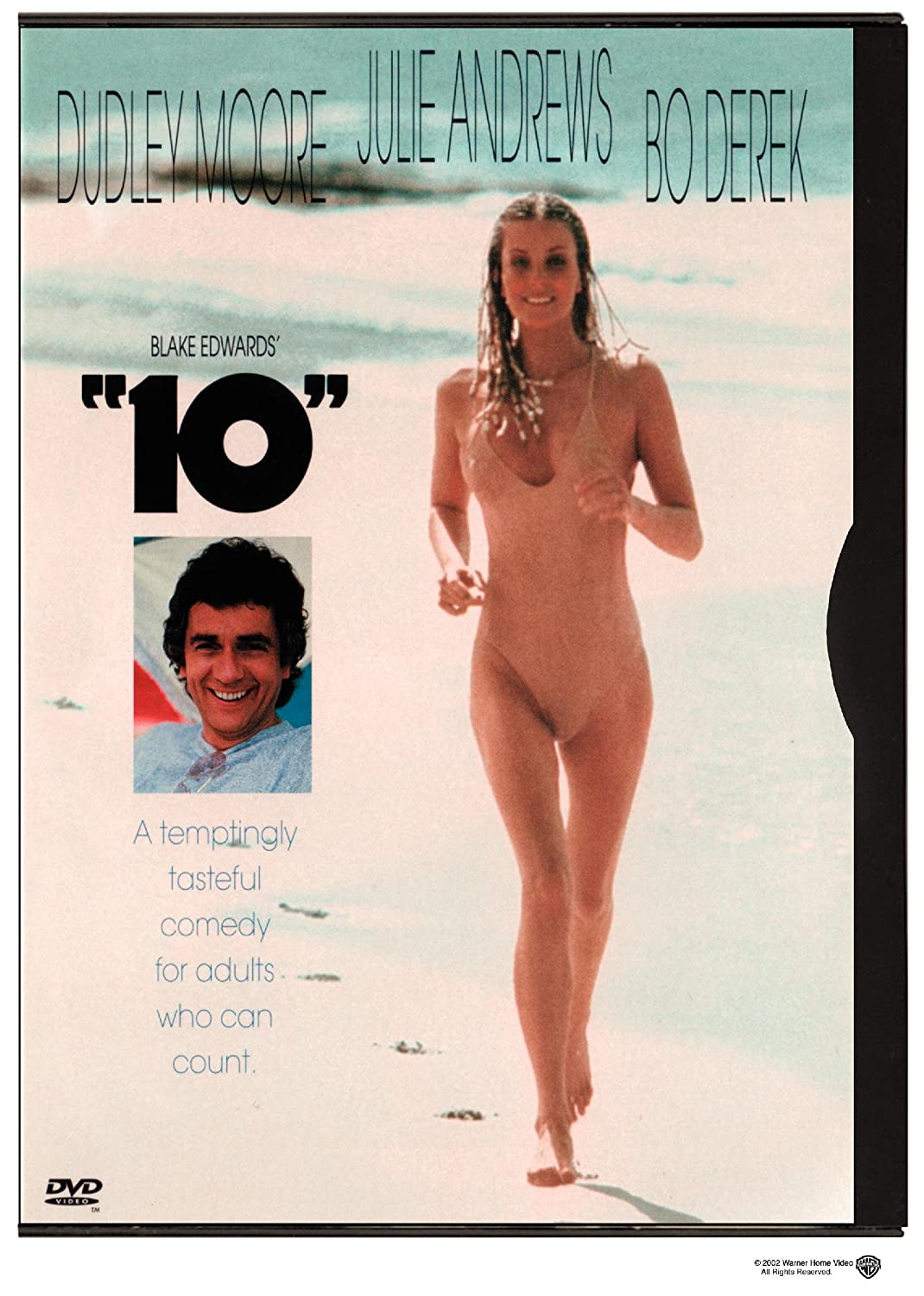 A middle-aged man risks everything by pursuing a new bride

Bo Derek is actually rated a Spinal Tap-esque 11 in this successful sex comedy but that still might be underscoring her.

She looks sensational here and it’s not hard to see why George Webber (Moore) gets hit by an Apollonian thunderbolt as he mundanely waits in his open top Roller at a Californian stop sign. Derek pulls up alongside in her bridal gown, enabling a glimpse of her face in profile.

Good grief, those cheekbones! As Garth enthuses in Wayne’s World: “If she were president, she’d be Baberaham Lincoln.”

George has no choice but to follow, setting in motion a cunt-struck, accident-prone pursuit down to Mexico that ultimately results in him returning home and screwing Julie Andrews instead.

It’s true Derek’s not the world’s greatest actress, but I’d argue it was her follow-up performances in awful movies such as Tarzan, the Ape Man and Bolero that were more to blame. She’s quite good in 10, aided by a script that cleverly avoids presenting her as a bimbo, sex object, bitch or slut. I like the way we don’t hear her refined voice or get to know her until the movie’s three-quarters done. This nicely builds up the anticipation, enabling George to indulge in many a rampant fantasy, the most famous being the one in which they’re running along the beach toward each other.

In five seconds flat the lithe, sultry, 23-year-old Derek gets her passport to stardom by bouncing through the surf in her beige one-piece swimsuit and beaded, corn-rowed hair. Earlier George described her to his psychiatrist as a ‘vision’ and you couldn’t ask for a better image in capturing what he means.

But it’s only after George saves her hubby’s life (in an implausible ocean set piece complete with tiger shark fin) that he plucks up the courage to ring the doorbell of her holiday apartment.

She opens the door clad in white towels, invites him in and offers a joint. As she walks away it’s clear he’s getting a view of her naked ass before seeing her tits in the bathroom mirror.

Is she a tease? A hussy? Or simply a modern liberated woman?

Whatever the case, George is confused. He’s gained the status of hero in his dream girl’s eyes and is finally alone with her, but something’s off. Fantasy and reality are starting to collide in his head. He looks more constipated than elated.

Further contact only deepens his sludgy movements. She’s obviously cultured, revealing an appreciation of opera and classical music, has forthright opinions and knows her own mind. He’s thrown even further when she becomes sexually forward. George was clearly hoping for a meek little virgin type rather than this confident woman.

Still, he’s put a lot of effort into his fantasy and he’s not going to walk out on it just yet, especially when she peels off her dress to Ravel’s Bolero. They go to bed and things are looking good until the hubby’s hospital phone call interrupts the sexiness.

For George,the uncomfortable reminder of her five-minute old marital vows proves to be the last straw.

“What the hell did you get married for?” he asks, obviously wanting to berate her for adultery while ignoring the fact he’s also in a long-term relationship.

“If I feel like sleeping with someone,” she replies, “I do it because I want to. I enjoy it. It pleases me.”

By now Webber is peevish, irked that she doesn’t regard him as anything other than a casual lay. “Okay if your husband does the same thing?”

Again she’s got the intellectual beating of him. “Why not? If it makes him happy…”

There’s no answer to that. Whether you agree with the concept of an open marriage or not, at least she’s got things worked out and is consistent. She has a code and can defend it. Ultimately, George’s cock is defeated by his hypocrisy, wanting to attack her for a perceived lack of morality while conveniently forgetting how he’s been stalking her on her honeymoon no less.

This is a decent movie about a very successful man on a journey toward becoming a tool. It’s littered with funny moments (the bee sting, the tumble down the hill, the geriatric housekeeper, the neighbor’s continual orgies) but also has something to say about having a midlife crisis and the jarring clash between fantasy and reality. Performances are nicely judged throughout, and writer/director Blake Edwards (Days of Wine and Roses, A Shot in the Dark) is a much better artist than his critics would suggest. And then there are those unforgettable shots of Bo Derek running along the beach. Frankly, they knock that Oscar-winning, Vangelis-accompanied Chariots of Fire stuff into a cocked hat.