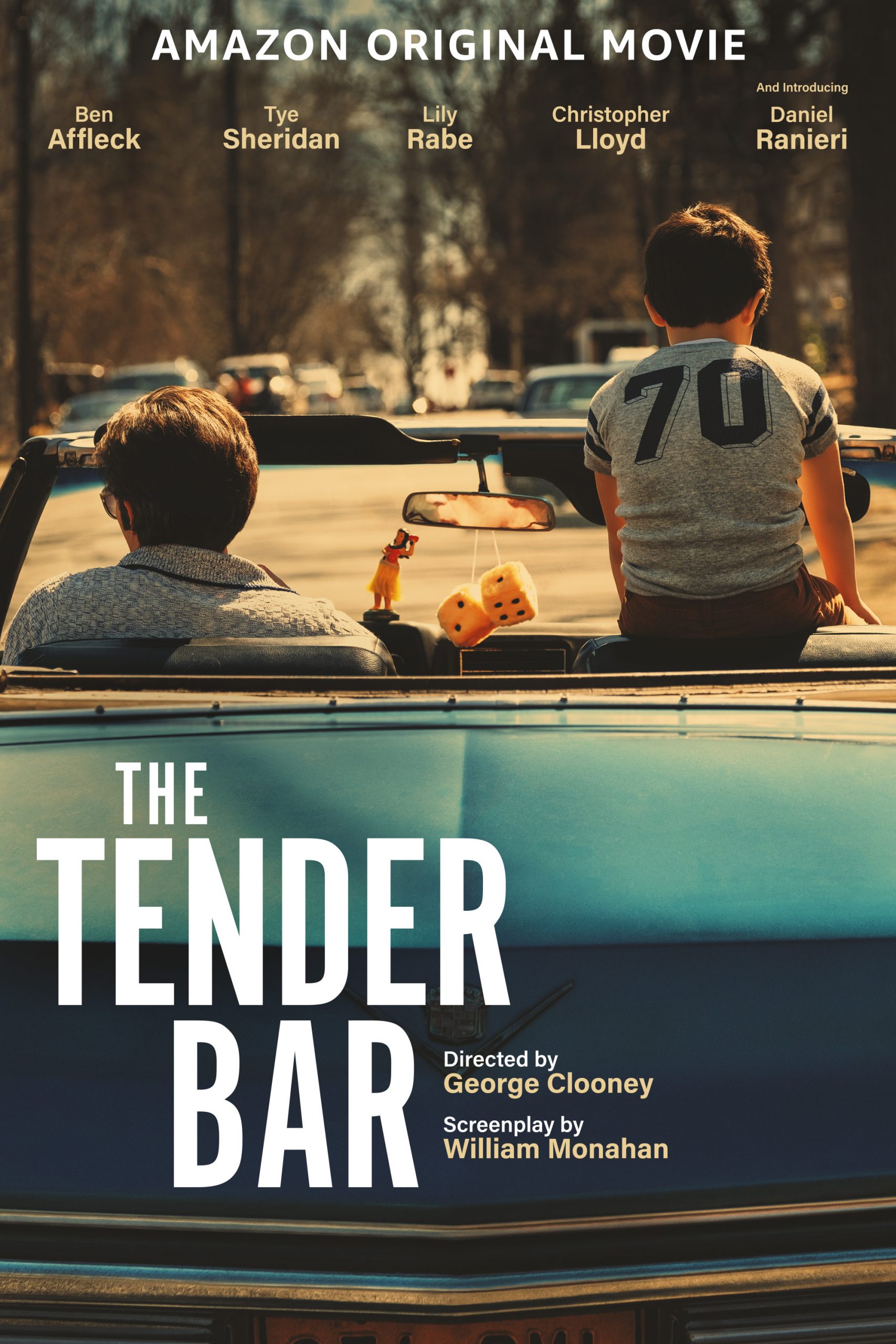 A coming of age story based on the best-selling book by J.R. Moehringer

The Tender Bar is a movie that is based on the blockbuster best-seller by J.R. Moehringer, published in 2005. This book contains the memoirs of J.R. and his experiences growing up with a struggling single mom, while chasing an elusive father, known only to him as a voice in the radio. This great best-seller is 412 pages packed to the brim with the life experiences of a young boy who grows to adulthood, nurtured not by a father, but by surrogate father figures in a Manhasset, Long Island bar known as Dickens.

This story (and movie) has two timelines, the young and impressionable J.R., played by Daniel Ranieri, and the older J.R., who attends Yale University, played by Tye Sheridan. The boy J.R. and his hard-working but broke mother (Lily Rabe) are forced to move back in with Grandpa (Christopher Lloyd), into his ramshackle old house in Manhasset.

This house is a busy place as it is packed to the rafters with Grandma, Grampa, Aunts, cousins and of course, Uncle Charlie. Grandpa is a crotchety and coarse old curmudgeon, who is as unkempt as his dilapidated two-story house. Grandpa never turns family away, no matter how crowded and chaotic it becomes in the two-story “shit house”, called so because of an always overloaded septic system. Mom is not happy with the setback of moving back in with Dad, but J.R. is thrilled with the mayhem and stimulation from his extended family, especially Uncle Charlie (Ben Affleck). Charlie runs the local watering hole known as the Dickens.

The Dickens is the very essence of this story, a place where the young J.R. can quench his thirst not for drinks, but for adult male role models with sage and valuable advice and worldview for the curious and needy young boy. He craves a real father figure, but his father is just an elusive voice on the radio, a popular radio show host in New York. Dickens becomes J.R.’s father and is the defining influence on his life.

Behind the bar is Uncle Charlie and behind Uncle Charlie is not only rows of liquor bottles, but hundreds of books, all of the classics, and we realize that this dive bar is named after Charles Dickens. The barstools are lined with the regular patrons, who provide J.R. love and advice to go with the wise words of his main mentor, Uncle Charlie.

The second part of this saga is a grown-up J.R. who attends Yale University. Mom had insisted that J.R. could attend Yale on scholarship, and he had spent his young life reading hundreds of the classics recommended by Uncle Charlie. Mom wants J.R. to be a lawyer, so that he can sue his elusive father for years of back child support. J.R. has other ideas and he is determined to be a writer. The balance of the story chronicles J.R.’s experience at Yale, a doomed love obsession with Sidney, and his continuing experiences as a drinking adult at the Dickens.

O.K. that is a lot about the characters and settings in the book, but how about the movie?

Oh, yeah, the movie. I’m not glad that you asked.

Yes, the movie. You are writing a movie review, are you not?

Leave me alone. I don’t want to talk about it.

O.K. It is obvious that you are not thrilled with the movie, would you care to share some of the reasons, or are you just going to sulk? Ben Affleck has been nominated for awards for his part.

I love Ben Affleck, but not as Uncle Charlie. Uncle Charlie is a tough guy and would not have been beat down by The Voice. He should have been played by someone like this.

What was the deal with “The Voice”?

The Voice is J.R.’s father, played by Max Martini. Now we are getting into some of the fatal flaws of this movie. In the book, The Voice is quite elusive, more of a concept than a real person, until the end. The movie gives him way too much clout and play, as a villain, exactly what this movie does not need. Along with Affleck, he too is miscast.

Is there anything that you did like about the movie?

I thought that the acting by Lily Rabe as Mom and Daniel Ranieri as the young J.R. was excellent and convincing. The part that is really nailed is the rickety old house and snarky Grandpa (Christopher Lloyd). The scene where Grandpa cleaned up, dressed up and is on his best behavior to accompany J.R. to the father/son breakfast is one of the most touching in the movie.

What about Sidney, the beautiful black gal, the always elusive love of his life?

No comment, other than I don’t think that this part of the story could have been handled any worse.

Why is the book and movie called “The Tender Bar” and what was the significance of this iconic bar in the movie.?

The book is called “The Tender Bar” because J.R., without a father figure and at a tender age, filled this void by listening to numerous interesting male role models at Uncle Charlie’s bar.

You have not mentioned the bar much, so how did the movie handle such an essential element of this story?

This is the greatest failure in this movie, and it is glaring. The interaction between J.R. and these guys is almost non-existent. No softball game, no going to the ballpark to watch the Mets, no trip to the beach with the older guys, nothing. The movie never mentions Cager, his idol and protector, or his best friend, his cousin, the baseball player.

You are evading my question. The Bar? The Dickens? What about it?

In the book, the bar, The Dickens, is a living, breathing, sweating, belching, smoking organism. This being has a mitochondria of sketchy, but sagacious male role models, who love and nourishe J.R. This movie is having none of that, just pathetic lip service at a bar setting that might as well be a Ruby Tuesday at a Mall.

Available to watch free with membership on Amazon Prime Video

6.0/10.0 With The Goatesians Rating Of Disappointing