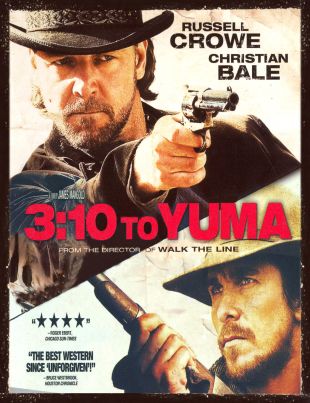 Ben Wade and Dan Evans have a train to catch.ÃÂ

Fair Value of 3:10 to Yuma: $14.00 : For the most part (Kate and Leopold the glaring exception), I’ve enjoyed almost everything that director James Mangold has made. This is a grim, desperate, suspenseful and deeply rewatchable western.

TL,DR: Desperate rancher Dan Evans (Christian Bale) takes on a job to act as an extra guard for escorting dangerous bank robber Ben Wade (Russell Crowe) to prison- namely to the eponymous train that will carry him to the Arizona state prison.

Kill Count: 45 Pinkertons, marshalls, bandits, and Apaches get shot, stabbed, burnt, and thrown off of cliffs during the course of this film.

Who Won’t Like This Film? It’s still a Western, which means lots of men sitting around a campfire. There’s two female characters in this film

Mangold’s Magic: What do 3:10 to Yuma, Logan, and Ford v. Ferrari all have in common? They all have well acted father-child dynamics at the heart of their stories. In 3:10, it’s Dan’s son William (Logan Lerman) who is the core part of the battle of wits, wills and charisma between the black hat Wade and his father. At the beginning of the film, Dan seems like a loser- a rancher who’s about to have his land foreclosed on, an amputeed veteran who’s reduced to verge of begging. And Russell Crowe is a tempting figure. He may not have the confidence of Glenn Ford’s 1957 performance, but he instead carries a mixture of menace and intellect. He’s a criminal mastermind reluctantly abiding the pettiness and brutality of his accomplices.

What works in this film? The pacing and the tension. As Ben Wade and his gang whittle away the posse one by one, it’s a thrilling series of overturns and gambits- one which leaves you with the sense of two evenly matched forces, lawful and chaotic, in close contention, as they gallop to a showdown in the aptly named town of Contention.

What doesn’t work? The only thing I can quibble with is the geography. Bisby and Contention are mining towns, up in mountain areas, not dry California plains. But almost all Westerns look like Southern California or Asturias, so that’s nitpicking more than detracting from the film.

How does this film work compared to others? For starters, it’s miles better than that forgettable Magnificent Seven remake. Indeed, I’m willing to call 3:10 to Yuma to be the best Western movie of the oughts, not that that is a large category, though.

Is this film worth watching? It’s one of the de facto films in my household. It may not be my favorite but it’s something that every generation will agree to watch. And for all of my re-watches of this film, I’ve haven’t grown bored of it yet. A real meat and potatoes action film, this one.