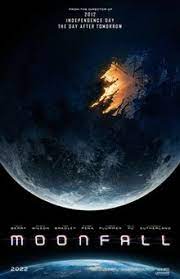 In this current age, where conspiracy theorists are given microphones, money, and even elected President, it’s not surprising that we’re seeing them appear as characters in movies and their bullshit confirmed as part of a movie’s plot. In an interview with Collider for his latest film Moonfall, Roland Emmerich is asked about his inclusion of conspiracy theories.

Interviewer (Steve Weintraub): “One of the things that is in the footage is, it’s clear conspiracy theories play a role in the movie. It is also interesting that on our planet right now, conspiracy theories are running rampant. You couldn’t have known, maybe there was a little bit of your subconscious playing into all the conspiracies.”

Emmerich: “Well, I do this traditionally. I always used conspiracy theories because, not that I really believe in them in any way, it’s more like it’s kind of the lure of it. That it’s on the internet, you can check it out on the internet, et cetera. There is like endless stuff about the moon.”

Moonfall features three main characters, one of whom believes in a conspiracy theory about the moon that I have never heard before (we’ll get to the actual theory in a minute). What I found interesting is that Emmerich revealed how he gets ideas for his films – by surfing the dark corners of the Internet for conspiracy theories. Many conspiracy theories are easily tailored into world-ending apocalypses, if they aren’t already exactly that. And, since Emmerich clearly loves destroying the world in his films, it makes perfect sense that he would get his ideas from places welcoming flat-Earthers and anti-vaxxers. Don’t be surprised when 2025 features Emmerich’s next film about how cryptocurrency is a secret world government program to fund the blackmail payments preventing aliens from destroying the Earth via volcanic eruptions brought on by ET(not human)-induced climate change.

The other interesting part of the Collider article is Emmerich discussing how the script evolved:

“Gosh, it was a long script process. There was a really long script process because I started writing it more or less, as I was also writing Midway and I had this kind of feeling, what should I do first Midway or Moonfall? Luckily, I didn’t do Moonfall. I have to say, luckily because it was a totally different script. And it was great that we changed it because was at one point this whole thing was only hit by a meteor. It was just silly and only because we then kept working and working and working it…it got so much better.”

To be clear, Emmerich believes a story about a meteor crashing into the Earth was silly (something that is a legitimate concern of NASA, to the point where they have two offices dedicated to it), but crashing the moon into the Earth is not a silly (and absurd) premise. What’s even crazier to me is that he thinks the script he ended up with was so much better than the meteor script, which means the meteor script is one of the worst things ever written in the history of ink.

(SPOILER ALERT – This film has already been spoiled by that Collider interview, not to mention almost every synopsis and article written about it, so I’m really not going to feel bad about including spoilers myself. Not that I ever do for movies best described as shit sandwiches.)

In all fairness, the so-called conspiracy theory inspiring Moonfall isn’t a conspiracy theory at all, but is actually a concept any science fiction fan is familiar with – Dyson Spheres. In Moonfall, K.C. Houseman (John Bradley) is our conspiracy theorist and believes the moon is actually a megastructure built by aliens. Why Emmerich chose to call it a megastructure and not a Dyson Sphere is beyond me, but probably is as simple as Emmerich wanting to be able to call Houseman a megastructuralist. Yes, it sounds just as stupid saying it out loud as it does typing it. Ask Bradley or Patrick Wilson (playing former astronaut Brian Harper).

Houseman has data showing the moon’s orbit has changed, but nobody will listen to him because of his past as a ranting conspiracy theorist who has a restraining order against him so broad he’s not even allowed to call NASA. He also has zero evidence (not even flimsy evidence) to support his theory, which is slightly more than the people have who believe there was massive voter fraud in the 2020 election, so of course nobody wants to listen to him talking about the moon shifting orbit.

Meanwhile, NASA has also noticed the moon’s orbit has changed. Deputy NASA Director Jo Fowler (Halle Berry) and a couple of analysts do some math and realize they have about three weeks before the moon hits the Earth. Well, bye-bye Earth. Despite the film’s military instantly resorting to “let’s nuke the moon,” there is literally nothing humanity can do to stop something the size of the moon from going where it wants to go. Not even Bruce Willis and his oil workers.

This brings us to the entire reason any of us are curious to see this movie, beyond seeing apocalypse level destruction. What is causing the moon to fall? It has to be something technological, probably alien, or else humans can’t stop it and this would be a very short and uninteresting movie. Definitely not the stereotypical three or four people who always save the day in Emmerich films. The moon being a Dyson Sphere presents all kinds of intriguing ideas to choose from. Instead, Emmerich decided that if one conspiracy theory is good, two is better. Enter artificial intelligence.

That’s right – AI. Specifically, a swarm of intergalactic AI nanobots from somewhere else in the cosmos wants to eradicate all biological life because any biological life presents a threat to the AI. Sound like any Skynets you might know of? The AI also knows the moon is really a Dyson Sphere and must destroy it in order to also destroy humanity forever. One catch, the AI can only detect electronics and only when the electronics are powered on and within the vicinity of biological life. And there is no biological life on the moon, so…wait, why does it attack the moon? Whoopsie.

Another interesting thing Emmerich says in that interview is how test audiences were much more interested in the moon than with anything happening on Earth. Well, no shit, Emmerich. Of course people are more interested in the moon actually being a space station than in watching you blow up New York City for the umpteenth time. Just because you think figuring out a way to crash half the Chrysler Building into the Colorado Rocky Mountains (not making that up) is interesting, doesn’t mean anyone else does. Let me say it again – you made the moon A SPACE STATION!!

On that note, it is also unnecessary to include additional roadblocks for characters that have nothing to do with the main problem in this film. In multiple scenes, the children of the main characters are confronted by a trio of thieves at gun point. In the first scene, the thieves steal their car, then try to steal oxygen tanks from them in a later scene (the thieves apparently are world class eavesdropping ninjas or else why would want to steal oxygen tanks?). There are plenty of problems for them to deal with due to the moon’s descent causing all kinds of crazy trouble (gravity waves, floods, literal loss of gravity) without also making them deal with human assholes stealing their car. All that does is trivialize the real danger (THE MOON IS CRASHING!!) and make us believe they aren’t really in any danger from the moon.

When we finally do get to the explanation of who built the moon and why it was built, we just don’t care. Since Emmerich is never interested in exploring the ramifications and implications of the explanation prior to revealing it, the explanation doesn’t land with the audience. He’s far too worried about showing us destruction and bickering colleagues than he is about a truly interesting concept. He thinks the most important things in the film are a ragtag group of people figuring out how to launch a retired space shuttle before the gravity wave hits and how to make his nanoswarm look good, when the actual important thing is, say it with me now, Patrick Wilson is hot.

The movie that should have been made in Moonfall is NASA and friends exploring the moon after they discover it to be a Dyson Sphere. Think along the lines of Arrival meets the “Relics” episode of Star Trek: The Next Generation. They can also discover or cause the moon’s orbit to be destabilized, allowing Emmerich to still wreak digital havoc on the Earth. Remove the terrible characters and replace them with characters we can sympathize with and root for. No more shitty ex-husbands. No more drunken astronauts. No more delinquent children. No more miscasting of Michael Pena or Eme Ikwuakor (whose deadpan performance made every Vin Diesel performance seem like a circus clown). No more casting Donald Sutherland in thankless, pointless, single-scene roles. And, most importantly, no more conspiracy theorists. We have plenty of scientists with plenty of wild ideas and theories based on actual science to use as story inspirations. Leave the crazies in the dark corners.

Rating: Ask for everyone’s money back for what is definitely a, checking notes, yep – shit sandwich.