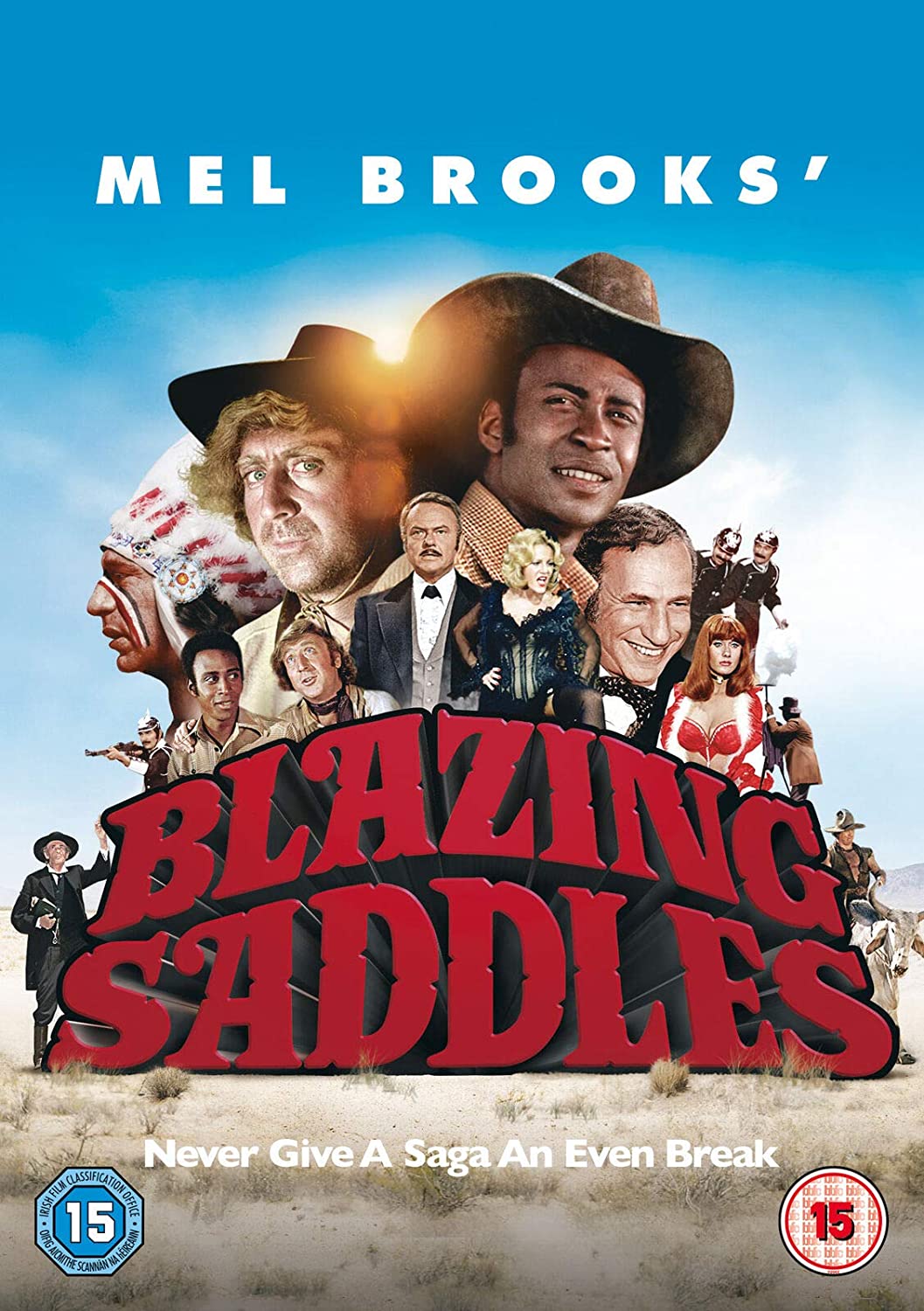 Women are stampeded and cattle raped in this Mel Brooks masterpiece

There has been a lot written about some of the outrageous comedies of the past, movies that could not possibly be made today. Movies like Animal House, Life Of Brian, Porky’s, Airplane and all those Blaxploitation movies that Dave Franklin has reviewed at Ruthless. We, as movie lovers, are truly not worthy of movies that are so stitch-bursting hilarious.

There is one movie that stands alone at the top of the list. It is a movie that shamelessly and hilariously exploits racism, sexism, gays, bodily functions, horses, and a poor oaf like Mongo. I present, Blazing Saddles and Mel Brooks. Snowflakes are blowtorched into oblivion, political correctness is stampeded, the religiously impaired are mocked and horses are knocked out cold. There is no limit, no restraint and no sacred cows in this movie. The cows are instead, in the saloon and in line at Graumann’s movie theater. Mel Brooks never met a Western movie cliche that he couldn’t nail in this film. Not only was Mel Brooks the inept governor in this movie, but he also played a Jewish Indian Chief. Brooks, speaking in Yiddish, made a racial crack about a black family in a covered wagon. “They darker than us!” Of all the movies that could never, ever be made today, this one carries the Olympic Torch.

Blazing Saddles starts right out of the gate with shockingly outrageous racism. The audience doesn’t have time to be triggered, because they are probably laughing too hard. In the first 5 minutes of the film Mel Brooks’ magnificent cast uses more racial epithets and gay slurs than in the entire body of work of Quinten Tarantino. The initial movie scenes are not merely a cheap shot to shock the audience. The outrage continues relentlessly throughout the entire movie. It only become more and more hilarious.

Here is the plot…The Robber Barons are building the railroad in the West but then run into quicksand. The track must be diverted through a nearby town, so the railroad tycoons and corrupt politicians have to devise a plot to coerce the townspeople to sell out to the railroad. They plan to harvest the fear and racism of the townspeople (sound familiar?) by appointing a black Sheriff! Much hilarity ensues as Sheriff Bart is not exactly embraced lovingly by the local population. How so? Witness this exchange:

Elderly Woman: Up yours, Nigger.

The rest of the plot of the movie is not really important. Of course, the town must be saved, and we must have emerging heroes to counteract the evil forces of the villains. Neither is it important that the ending of the movie completely shatters the Fourth Wall as the melee between the bad guys and the Rock Ridge residents spills out onto other movie sets, and eventually to the streets of Burbank. I mean, really, how in the world do you end a movie like Blazing Saddles? How in the world do you get away with a scene like Mongo punching out a horse?

The writing in Blazing Saddles was magnificent, one of the funniest scripts ever, but where Mel Brooks really made this one a comedic masterpiece was with the cast he assembled. I don’t know where to begin, so let’s begin with the N…., I mean Black Bart, the newly appointed sheriff of Rock Ridge. Cleavon Little was just perfect as the long-suffering sheriff. He beat out Richard Pryor for the lead role, and I’m glad that happened, even as perfect as Richard Pryor would have been in this movie.

Gene Wilder starred in a rare supporting role, and we also had Slim Pickens, Madeline Khan, David Huddleston, John Hillerman, George Furth (Woodcock in Butch Cassidy!) and NFL star Alex Karras as the unforgettable Mongo. However, the real superstar of comedians in this film was Harvey Korman of The Carol Burnett Show fame. He stole nearly every scene he was in as Hedley (not Hedy) Lamarr, the villain who wanted to run the railroad down the main street in Rock Ridge. There were also cameos from Count Basie and Dom Deluise, who was directing a scene that was a takeoff of Top Hat in an adjacent studio. The interaction with the Blazing Saddles crew and ensuing mayhem was totally off the chain as the movie was (trying) to end.

Blazing Saddles was a film that only Mel Brooks could pull off. It is right up there with the funniest comedies ever produced, most of them made in a different era, never to be duplicated. This was a near perfect film and the only tiny criticism that I have is that Mel should stay out of his own films. He is much more effective behind the camera than in front, but in a comedy as funny and unique as Blazing Saddles, this tiny detail can be forgiven and forgotten.

10.0/10.0 With The Goatesians Rating of Can Never Be Duplicated