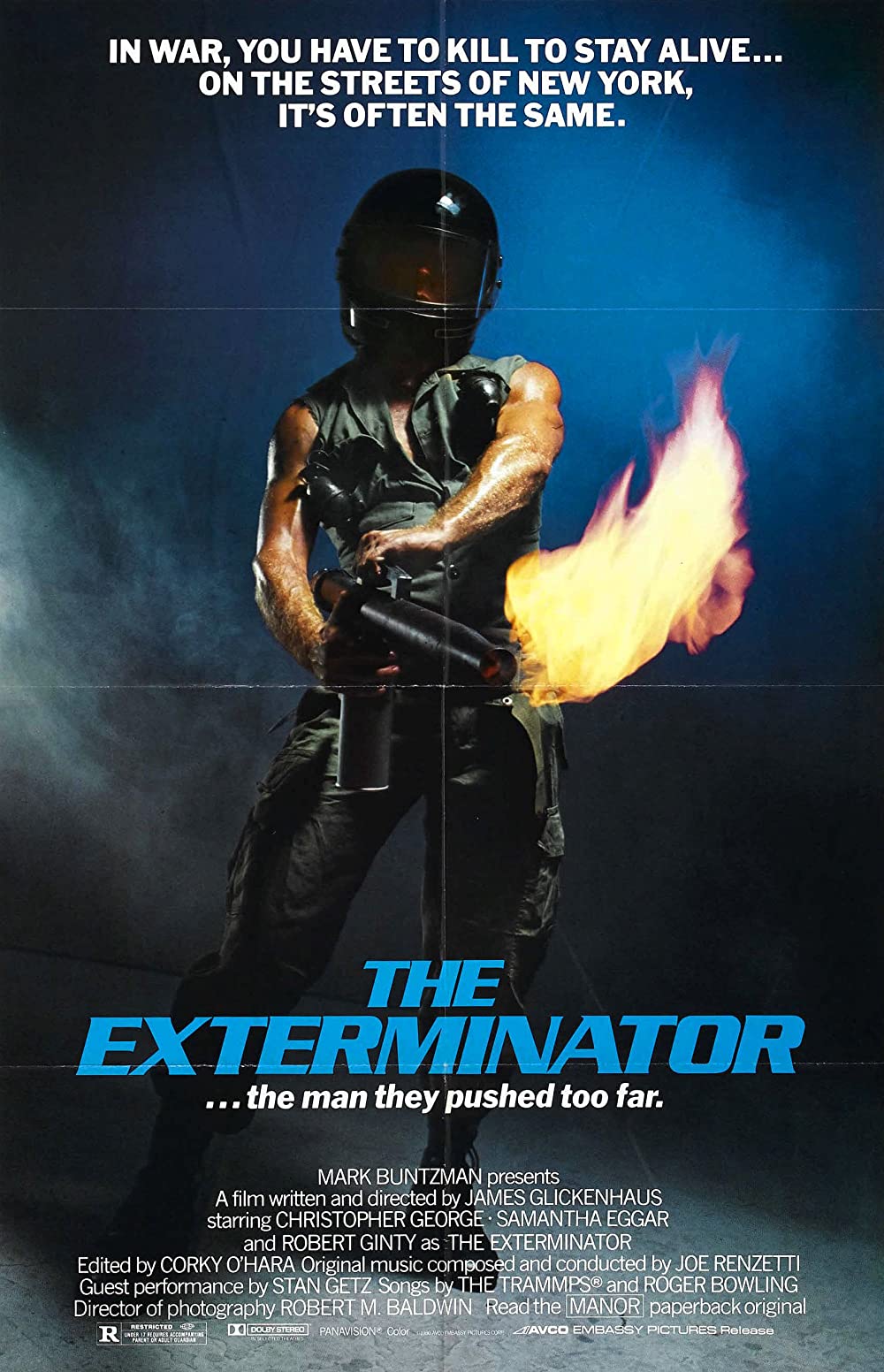 I have a clear recollection of standing in a video shop aged twelve with On Golden Pond on one side and The Exterminator on the other. I can’t remember too much about the cover of the first, except it featured smiley old farts and had the word pond in the title. Even at that tender age I knew there was no way a good movie could be made about ponds.

And then there was The Exterminator, some ripped guy in a black motorcycle helmet wielding a flamethrower with the tagline: If you’re lying… I’ll be back.

Well, which one do you think I pestered dad to rent?

Turns out this urban thriller’s heady mix of Vietcong war crimes, gangster-shredding violence and the odd canine fatality was far from healthy viewing but just the ticket for me and my hooting mates.

What are these sick bastards doing? John Eastland ( Ginty) is one of those unlucky bastards that exploitation flicks couldn’t function without. He’s a decent guy but can’t catch a break to save his blue-collar life. Firstly we see him getting blown up and captured in Vietnam, eventually escaping after his best buddy Michael (James) saves his life. Things don’t improve back in New York when Michael has his spine rearranged by the rampaging members of a street gang called the Ghetto Ghouls.

What’s a man to do? Write a hand-on-heart letter to the local TV news station, that’s what!

‘The people of New York have been terrorized by criminals for too long,’ the letter-reading newscaster subsequently tells the viewers. ‘Politicians have stood idly by as thugs and killers have taken over our streets, our parks, our lives. As of today, this will no longer be true.’

And, of course, the missive is signed Chuck Bronson.

No, hang on, I mean The Exterminator.

Is the villain any good? One of the interesting, vaguely surprising things here is we don’t get a chief bad guy for Eastland to face off against. Just when you think he’s settled on eliminating one piece of scum, up pops another target.

How skuzzy are the other men? Pretty skuzzy. You can take your pick between racist, badly dressed, beer-stealing street punks whose raison d’etre is to piss off honest, hardworking citizens or the hooker-torturing, pedophilic inhabitants of a horribly painted, none-too-legal brothel. There’s a definite lack of male role models throughout.

How do the lovely ladies fare? Not great, but I’ve seen a lot worse. Hookers get the brunt of the abuse, although an old dear is smacked across the face and kicked on the ground by three members of those fun-loving Ghetto Ghouls. Mind you, given she was out at night, taking a shortcut through a park and carrying groceries she was clearly asking for it. There’s also a kindly doc looking after Eastland’s crippled buddy but as she doesn’t get raped, set on fire or thrown off a building I fail to see the point of her role.

Would the violence make a vicar faint? Back in the day The Exterminator generated a lot of negative press, perhaps fuelling its surprisingly decent box office performance. Plenty of moral crusaders were convinced cinematic brutality had hit a graphic new low, their handwringing objections centering on the Vietcong’s machete-wielding, head-removing shenanigans in the opening minutes.

Even so, times have moved on. To give you an example, I caught Rambo: Last Blood the other day in which Sly also gets saucy with a machete by chopping off a baddie’s foot rather than a head. It’s such a convincing act of extreme violence I not only gasped ‘Ooh!’ but suspect an extra was genuinely mutilated, having agreed to the amputation after the producers offered a crate of beer and the post-hospital chance to hang out with Sly for a day or two.

Not a bad deal, I guess.

Anyhow, despite a decent body count, The Exterminator never made me go ‘Ooh!’ Many of its sadistic episodes, such as a screaming Mafia boss being fed into a meat grinder, are implied rather than shown (probably because the budget was running out). In short, if you could keep a vicar away from this movie’s groovy start, I reckon he might get through this one (although he’d still be in serious danger of awkward silences, multiple blushes and the occasional stuttering objection).

How fucked-up is this film? The ex-Vietnam Vet running amok was probably first introduced with the pretty well executed 1974 cult horror flick, Deathdream, reaching its commercial peak with Rambo returning to the South East Asian country to refight the war (“Do we get to win this time?”)

In The Exterminator Eastland is not presented as a nut or misfit, never once coming across as anywhere near as deranged as Taxi Driver’s Travis Bickle or Rolling Thunder’s Charles Rane. The only suggestion of post-traumatic stress is a sporadic Nam flashback. Eastland’s just tired of being surrounded by scummy bastards in his hometown. He doesn’t go in for Bond or Arnie-style quips (I’ll be back is said quite straight). Neither does he see himself as some sort of savior. Hell, he doesn’t even appear to get off on the violence. Ginty gives a buttoned-down performance, almost managing to convince us that the burnings, shootings and explosions are necessary. Indeed, some of the flick’s quieter moments, such as a silent Eastland dripping mercury into dumdum bullets before meticulously filing them down, are among the most effective.

Saying that, things are still all over the place. It starts superbly with a spectacular explosion that sees Eastland thrown about thirty feet into the air, his tumbling body silhouetted against a wall of flame. I also like the way the (disappointingly brief) war segment segues into a nighttime swoop around New York harbor as a heartfelt ballad kicks in. Indeed, there’s a lot of outdoor filming, an approach that brings the city’s markets, streets, parks and grimier locations to vivid life.

However, it’s baffling why director Glickenhaus fast forwards through some pretty damn important events. In four scenes flat (that all take place on the same day) we get the life-ruining assault on Michael, Eastland informing his wife he’ll never walk again, a pinioned gang member being threatened with a flamethrower, and Eastland bursting into the Ghouls’ graffiti-daubed HQ for his first spot of murder.

Chuck in the CIA, a pervert senator, the Mob, a ludicrous scene in a steakhouse toilet which involves defecation and a ninja-like abduction, and I’d have to say The Exterminator doesn’t go the way you’d expect.

However, it has a little more intelligence and ambition than it’s generally given credit for and remains far better than the simplistic nihilism of something like Death Wish II. Dare I say it, but The Exterminator might be due a bit of reassessment. It’s not top-notch or anything, but it’s a key vigilante flick and definitely features a few scenes that’ll stick in your head. Most of all, it’s gotta be better than watching those Oscar-winning fogies Henry Fonda and Katharine Hepburn catch tadpoles at their stupid pond.