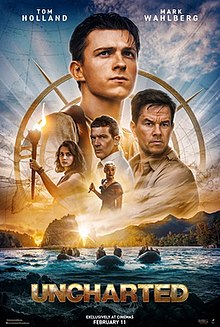 Nathan and Sully go on a treasure hunt for Magellan gold.ÃÂ

Given the number of video games released every year, it’s surprising to see how few of them are adapted into movies. Ever since Super Mario Bros. debuted as the first video game adaptation / cow pie in 1993, it makes sense that studios would be hesitant to make more movies from video games. Well, except Sony Pictures, who have produced approximately eighty-three Resident Evil movies.

Since 2017, there have been a total of ten video game movies (two of them are Resident Evil flicks, in case you were wondering), two of which nobody saw or even heard about (including me). Personally, I still say the latest Tomb Raider is the best adaptation and it’s not particularly close. Now we have Uncharted, a very similar game to Tomb Raider, including a very similar plot. Considering that, plus Tom Holland playing the hero, Nathan Drake, I had high hopes going into the film. And by high hopes I mean not something to avoid stepping in.

(SPOILERS – I won’t spoil anything the trailers didn’t already spoil.)

Nathan Drake hasn’t seen his brother Sam in years. Ever since Sam fled out of the window of their dorm room at a private school after being expelled for breaking into the school’s museum when Nate was twelve, Nate only hears from Sam via postcards from around the world. On that fateful day, we are told that explorer Ferdinand Magellan wasn’t sailing around the world just for prestige, but rather was searching for gold. Because of course he was. Only school children believe the nonsense we are fed about the age of exploration being about exploration and not about plundering other civilizations for gold and slaves.

Back in the present, Nate is tending bar when Victor “Sully” Sullivan (Mark Wahlberg) presents Nate with an opportunity to go find the treasure that Magellan may or may not have found. Nate initially rebuffs Sully but changes his mind after breaking into Sully’s apartment and seeing the same map that Sam and he were going to steal from their school’s museum so many years ago. Now the movie can actually start, by which I mean you can press the ‘start’ button on your controller.

If you have any doubts about this movie being adapted from a video game, the opening scene will erase those doubts immediately. And, that’s only if you haven’t already seen the trailers. We meet Nate coming to consciousness, his foot tangled in the webbing of a string of crates trailing out of the back of a currently flying cargo plane. He proceeds to parkour his way back to the plane via the string of crates while fending off evil henchmen and the scene ends with him being knocked back out of the plane by a car, cutting to twelve-year old Nate. This scene couldn’t be more videogame-esque short of Nate disappearing down a giant green pipe.

Once we get to the treasure hunt part of the film, you will feel like you are watching National Treasure, The Da Vinci Code, and The Goonies all at the same time. There are clues leading to clues leading to more clues. The clues require an in-depth knowledge of history and symbols related to the treasure. There is a heist of an historical artifact from a well-secured building that is a key to finding the treasure. There is silly banter. There is a hot girl, Chloe (Sophia Taylor Ali), who teams up with Nate and Sully. There are a bunch of well financed bad guys who are always just one step behind the good guys. There are even pirate ships in a cave. The only things missing are Josh Brolin and a skeleton with an eye patch.

And you know what? It’s a fun movie, as well it should be. If you thought the Frogger-crate scene was fun, just wait until you get to the part with a helicopter chase scene featuring flying, 500-year old Spanish ships (also spoiled by the trailers). Yeah, I was laughing. It was hilarious and exactly the kind of scene that would be in a video game.

I also enjoyed the performances from the cast, including Antonio Banderas and Tati Gabrielle playing the lead villains. Everyone performed their roles to the best that one-dimensional video game characters can be portrayed, though Holland did stray dangerously close to falling into his Spider-Man character a couple of times (I blame this on the director, Ruben Fleischer, but I’m also okay with it). I thought the interactions between Holland, Wahlberg, and Ali worked really well, enough that I want to see them do another one of these films.

Overall, it’s a movie I liked because it appealed to the gamer in me, while also appealing to the film critic in me, by embracing its roots without tripping all over itself, like most video game movies tend to do. Sure, it was borderline ridiculous at times, but it never came off as trying too hard or trying too little. Like with the video games, I’m in for a sequel.

Rating: Don’t ask for any money back, not even a doubloon.