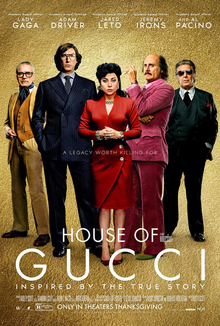 If one were to pen a tale championing the proper way to end a relationship, and forge toward greener pastures, House of Gucci puts forth an exemplary illustration of what calamities to avoid. That is, were it not for the combination of a biopic-period piece serving as the conceit for achieving so. What else can be said today about a movie that has all but evaporated from memory since viewing it five weeks ago? Hardly anything in the way of finer plot points. Memory reverts back to its true ephemeral self, to the detriment of mediocrity’s prospects for endurance and lasting renown. It escapes me now, just as it had in the darkened theater, all the nefarious intentions and red flags, if any, that forewarned of a matrimonial doom.

Granted, Maurizio Gucci, whose murder was orchestrated by a former wife, is far from a shooin into the pantheon of slain celebrities. His case is not obscure as to outright dismiss his bid. Tate, Lennon and Versace fell victim to their own fame, while Lincoln and the Kennedy’s took up inherently dangerous posts. It is when the tables turn, and the underdog female turns up with the smoking gun, doubtless with pants down before and after the fact, that my inner sociologist is roused. Gatti, McNair, and Gucci before them, fit that underrated, underrepresented mold. Yet what should be a compelling segment of any court system’s archival chest, contains none of the provocative vigor of a dangerous liaison.

It used to be that, when all else fails, Ridley Scott was the visionary with the keen eye for beautiful shots and the visual panache to fall back on, to sustain a sense of wonder and amplify a magnitude for the occasion. The Isle of Skye… Wadi Rum… Fiorland National Park, to name a few are signatures of and testament to a visual sensibility that in fairness should not be requisite in an urban setting like in Black Hawk Down, Hannibal and American Gangster. Yet somehow it was deemed it fit for this exercise in camp to take up time in a cramped schedule, a working docket boasting no less than an Alien serialization, a Gladiator sequel, and a Pompeii miniseries. One can only imagine my shock at learning of the legendary workaholic (70 upcoming projects between development and production at the ripe age of 85), while he smeared his fingerprints on this misguided attempt at a sordid family saga. This somehow explained the redeemable moments in this—mostly histrionic, partly subdued—dud, but truer judgments are passed ex tempore, not in retrospect.

House of Gucci, despite generous helpings of criminal conspiracy and betrayals of several varieties, was not the juicy, scandalous affair one justifiably expected from the opening passages. They portended the perils of wifing-up a real gold digger. It was instead the husband who quietly, stoically, even—no, methodically—withdrew. Bit by bit, he took every measure of constraint in the process (short of thrashing her around an over-sized bathroom, an opulent foyer, or a stately summer home in the Alps, after the butler went to retire), to signal his intent to separate. Years prior, and a lifetime away in 1978, Gucci was coming up on a critical juncture. Faltering though not entirely fallen on hard times, the fashion house found itself in a pursuit of new blood. As heir to fifty-percent stake in Gucci, Maurizio (Driver) writes himself out of his father’s will (Irons) upon marrying Patrizia (Lady Gaga), a social climber with ample sexual capital to turn the head of even the most Germanic and restrained of eligible bachelors on the peninsula.

The other half of the estate belongs to his uncle, Aldo (Pacino) whose progeny (Leto), an attorney, leaves even much more to be desired to take the reins than Maurizioâs suitability. Rodolfo (Irons) dies, though not before warming up to his exiled son and his growing family and forgetting to sign him back into the will. By then, the principal Guccis have found their way into the fold and relocated to New York City. This is mostly thanks to Patrizia’s charm on the remaining Guccis, but the scheming was only getting started. The missing signature is forged, tax authorities raid the company accounts, and a power struggle plays out across the Atlantic. Aldo and his son Paolo give up their stake in a careless blunder to clears the runway for Maurizio to claim the estate solely. Subsequently he ran the business into the ground, and compromised Patrizia’s possible alimony in effect, though much of that is conjecture gleaned from the picture.

To Scott’s credit, nowhere was the duo’s matrimony paved with the familiar bed of roses that suggests a customary estrangement or lends a cheap rendition of such a tragic quality or a poignant tone. Separately, there aren’t exact indications of greed being the ulterior motive outside of the hearsay and skepticisms of a vigilant father. Therefore we are left, by turns, with the overzealous drive of a crazed, scorned wife backfiring for all involved. Perhaps the only way to make sense of the misplaced humor, grating accents, and scant contextual background of the House’s rise to fashion fame, is to assume the outsider’s point of view. Why shouldn’t we? Among the quintet of principal actors, all boasting academy recognition, the smallest in stature and pedigree towers over the rest. Her garish accent aside, the film’s world is framed around her excursion across extra-familial bounds.

Between the wedding and divorce, and throughout futile reconciliatory overtures, Patrizia is shown in a sympathetic light, with an eagerness to lend unwanted feedback that is both excessive and commendable. Her incessant meddling into family affairs (she crosses herself in the order of God, Son and house of Gucci in a wince-inducing moment) resembles more an unbridled ambition and an earnest desire to see the company coffers grow. Moreover, that offending moment suggests a wish to fit into the clan; an out of turn leap in the consanguine order belonging to the offspring she would bear from a Gucci. She wanted to be them. Could it be another side of female narcissism, smoldering, undetected, but undeniable, all the same?