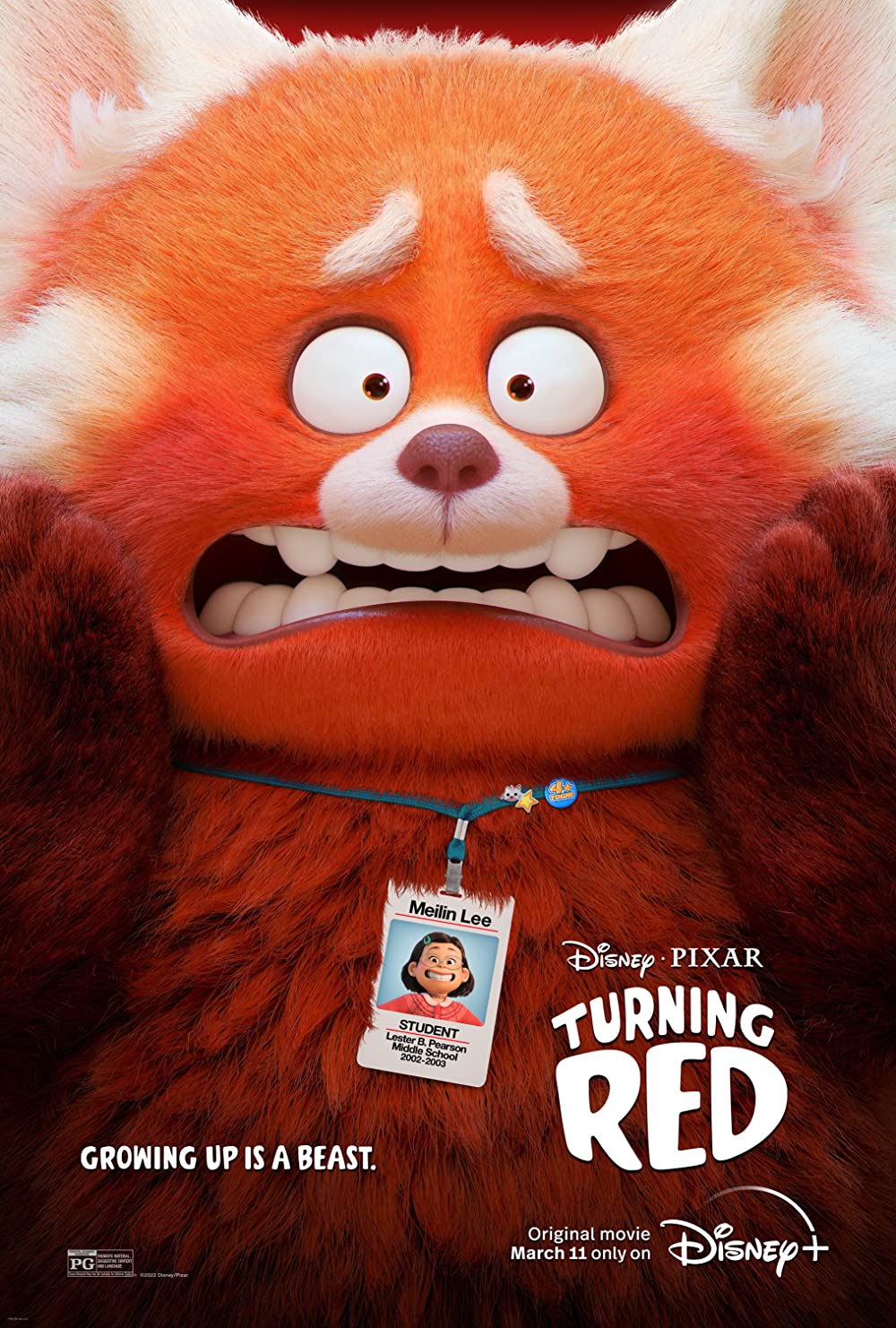 Crimson Tide (or a visit from Aunt Flo)

“Turning Red” – Crimson Tide (or a visit from Aunt Flo).

Turning Red is a movie I’m really torn about. You can be forgiven for not knowing what this movie is actually about if you have only seen the preview. Let me help. It’s about puberty. Specifically, a girl’s first period. What I’m torn about is the way in which the material is handled. I realize that as a man, I’m not the best judge of this. But, I like to think I’m intelligent enough and empathetic enough to make a reasonable argument. I’m also married to a woman who will tell me if I’m way off base.

My initial impression of the movie was lukewarm and had a lot do with the fact that the movie is literally portraying menstruation as a giant, raging, red monster. In the #metoo era, this seems like a very curious choice, as it continues the absurd prudishness of America by not calling it what it is, while also continuing to stigmatize something that half of the Earth’s population goes through. One of our mantras with raising our own kid is that we don’t use euphemisms for things like that. He has a penis. Girls have a vagina. He knows how babies are made and how they are born. We Kindergarten Cop‘d our child.

And the movie isn’t subtle about what it’s talking about. When thirteen-year old Meilin wakes up one morning and discovers she’s a giant red panda, she runs to the bathroom, finds that she has horrible body odor, hair in new places, and her mom asks Meilin about Meilin’s red peony while all but flinging tampons and pads at Meilin’s crotch. Keep in mind that her mom is fully aware that Meilin is going to change into a giant red panda at any moment because all of the women in her family have been cursed with the same affliction, yet immediately jumps to bleeding vagina. That’s right, they even call it a curse.

Since I didn’t want to jump to any conclusions about misogyny striking again, I did a little bit of research on the director/writer, Domee Shi. Turns out she’s a she, which immediately stopped my brain in its tracks. Turns out the other writers and producers are all women. So, what the fuck ladies? Why are we watching a movie that has the potential to scare the shit out of young girls about something that desperately needs to be de-tabooed? Turns out, Shi wrote the film based on her own childhood. Didn’t see that one coming.

And that is where I got torn. Shi appears to be telling the story from her own point of view and how she felt going through puberty. Overbearing mom, major body changes, suddenly crushing on boys, euphemisms galore. From that point of view, it’s kind of endearing. I can see a lot of teenaged girls relating to the film and taking comfort that someone is finally showing us all how they feel. I still don’t feel very good about the portrayal, but like I said, I’m probably not the best judge.

Speaking of less-than-ideal judges, here is what a nine-year old boy thought of the film…

What is the first thing you want to tell me about the movie?

What do you mean?

What’s the first thing that comes to mind when we talk about Turning Red?

The giant red panda mom at the end.

[laughing] That’s the first thing that came to my mind.

Okay, let’s back up a bit…what is Turning Red about?

It’s about this girl…who has like this curse that if her emotions get too amped up, she turns into a giant red panda.

Her name is Meilin.

So what is the conflict in the story?

Like…she has to get, like…because there IS a cure and she has to wait for the next red moon to like do this ritual and it’ll take her to this magical forest where Sunee, the red panda master, I guess…goes through this portal thing that will get her out of the panda curse thing. Yeah. Basically that’s it.

So you remember Sun Yi’s name, but not the main character’s name?

What other characters are in the movie?

You don’t remember their names, do you?

How many friends does she hang out with?

How old are they?

Are the friends all girls, all boys, mixed..?

Do her friends know that she can turn into a giant panda?

Do they know right away?

How do they know?

Because Meilin turned into the panda and they accidentally saw her and they were like WHOOOAAA!

So she has to wait ’til the red moon to lift the curse?

What does she do while she’s waiting?

Goes to this concert, and she has to get through school, and…a party.

Does her mom want her to go to the concert?

Because she thinks that the stars of the concert are bad people.

[laughing] So you can remember the name of the band, but not the main character.

And what kind of band is 4*Town, do you know what that’s called?

So a bunch of middle school girls want to go watch a boy band?

Mmhmm. At the Sky Dome in Toronto.

Ehh…well I might sneak away to go watch Hamilton. [funny singing voice] IT’S GONNA BE MAY.

Who was your favorite of Meilin’s friends?

What do you think of Meilin’s mom?

She’s strict. Kinda. She never lets Mei go anywhere, she’s like NAAAH. Like the party, or the concert.

What do you think about that?

Well I guess no.

A birthday party is dangerous?

Yep. Well, teenagers tend to be a little stupid.

I want you to remember that when you become a teenager.

Do you remember what one of the themes of the movie is?

Like don’t hide your characteristics. Don’t hide who you are.

If you could turn into any animal, what animal would you turn into?

Because they can fly and it’s like a predator, and it can see pretty well. And it’s the symbol of the U.S.

But the movie’s in Canada.

You didn’t say anything about that, dad!

What do you think it means that she’s turning red? Do you think there’s more meaning there?

Red…? She’s angry, and most of the time she turns into a panda when she’s angry.

What do you think kids will like the most about the movie?

Uhh…the giant mom at the end!

Was the movie funny?

Is there anything else you want to say about the movie?

Rating: [thinks really hard] Ask for like seven percent back. Or maybe five percent back. Because overall it’s a really good movie, but there are some minor quibbles.

Quibbles? Is that what you said?

Mmhmm. I can’t remember their names