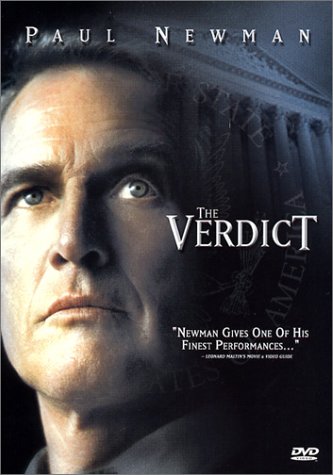 I know that in my reviews I often need to rescue myself from the perils of redundancy. Nevertheless, I will state it again; Paul Newman is and was a superstar, a Top-5 actor of all time. A quick search reveals the ugly reality that most list-makers do not share this opinion. None of this is really important, because the verdict is in and the movie of the hour is The Verdict, starring Paul Newman at his very best.

Frank Galvin is a washed-up, washed-out alcoholic of an ambulance chasing lawyer. The opening scene in the funeral home was embarrassing and cringeworthy as Gavin is handing out business cards to the bereaved, pretending to be a helpful friend of the deceased. He was thrown out in disgrace. He hits bottom and wrecks his office in a drunken rage.

His pal, a lawyer named Mickey Morrison had gotten him a lucrative malpractice case against a Catholic hospital. Their negligence with anesthesia had turned a healthy young woman into a vegetable. It is an open and shut case, and Galvin could make a huge fee with what was sure to be a generous settlement.

However, something happened on the way to the easy paycheck and settlement. Frank visited the comatose woman in the hospital, and something snapped. He was outraged and determined to take this case to trial for maximum damages for egregious malpractice. The courtroom drama was about to ensue in the David Mamet screenplay directed by the great Sidney Lumet.

I would not dream of spoiling this wonderful movie. This was dark, dirty and harrowing courtroom drama at its best. It was David vs. Goliath, a brilliant but humanly flawed attorney against a crack law team, The Catholic Church and a corrupt judge. Paul Newman was at the very top of his game as the passionate and exasperated lawyer who risked everything for justice, and for his own redemption.

The Verdict is one of the top courtroom dramas ever produced. The acting and dialogue are superb as we witness plot twists, devastating betrayal, the arrogance of power and the inevitable disappointing corruption of the judicial system. Will justice prevail?

9.0/10.0 With The Goatesian Rating of Courtroom Drama At Its Best