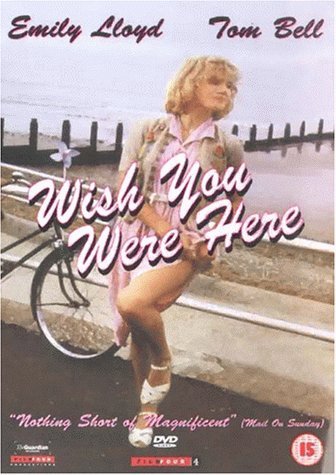 Wish You Were Here

That arch wit Morrissey obviously knows a thing or two about holidaying in dismal seaside towns. Just listen to the brilliant Everyday is Like Sunday in which he dreamily yearns for such places to be bombed: This is the coastal town that they forgot to close down. Armageddon, come Armageddon! Come, Armageddon, come! Everyday is like Sunday. Everyday is silent and gray.

Well, at least Morrissey could leave. It’s much worse for sixteen-year-old Lynda Mansell (Lloyd). She has to live in one. The opening shots of this coming of age classic tell you all you need to know. Threatening skies, horrible muck-like sand, a cold, uninviting ocean, and crying, swooping seagulls. Swimmers and sunbathers are as rare as Lynda’s grasp of decorum.

Witness her soon-to-be-fired antics in front of her straitlaced father in a packed tearoom. “We all piss in the teapot,” she gleefully tells the appalled customers while standing on a chair. “I’m pregnant. In the club. A man’s willy has entered my person. Am I the only one who does it? What do you lot do, eh? Hands up all those who like willies.” By now her fists are pumping the air as a manager runs around frantically apologizing. “I like willies! Sex!”

It’s no real surprise Lynda’s got to this point. Wish You Were Here introduces her in a black and white photograph as gasmask-clad child, as if the stuffy air around her is not quite fit for her inhalations. Soon afterward she’s racing along the wet promenade on a bike flashing her legs at the startled boys, mooning neighbors, out-psyching psychiatrists, and doing rude things in a garden shed.

But rush she does, a whirlwind-like need for attention that’s no doubt been generated by the early death of her beloved mother. Despite the conservative moral climate of 1950s Britain, she has no qualms about pre-marital sex. Employers (and adults in general) are viewed with disdain, always trying to clip her wings. Then again, boys her age also disappoint. Jobs come and go, invariably ending in funny public spectacles.

Her poor dad can’t quite give up trying to rein in his bored, unapologetic offspring, even though the reward for showing paternal concern is to bounce between embarrassment, shame and mortification.

“There’s something wrong with you, my girl,” he concludes.

Things aren’t helped when his bookie friend Eric (Bell) takes a creepy interest in her. This is a snake-like man who looks at Lynda as if she’s a nice, warm mouse. “Think you’re it, don’t you?” he tells her, reaching under her dress while they stand in her living room. “I think you’re all the same. Don’t know what you’ve got it for. All you young girls, you’re scared. All talk, scared of a real man, ain’t yer?”

Still, it’s in this relationship that we start to grasp Lynda’s glaring contradictions. She knows Eric’s a wrong ‘un but still lets him have his way. She’s tough but vulnerable, defiant but desperate to be accepted, intelligent yet occasionally quite dumb.

A typical teenager, really, just a bit more of an exhibitionist than most.

Throughout it all, Lloyd (and her very expressive face) vibrantly portray the myriad sides of this brilliantly fleshed-out wild child, especially the way she spits out the choice dialogue.