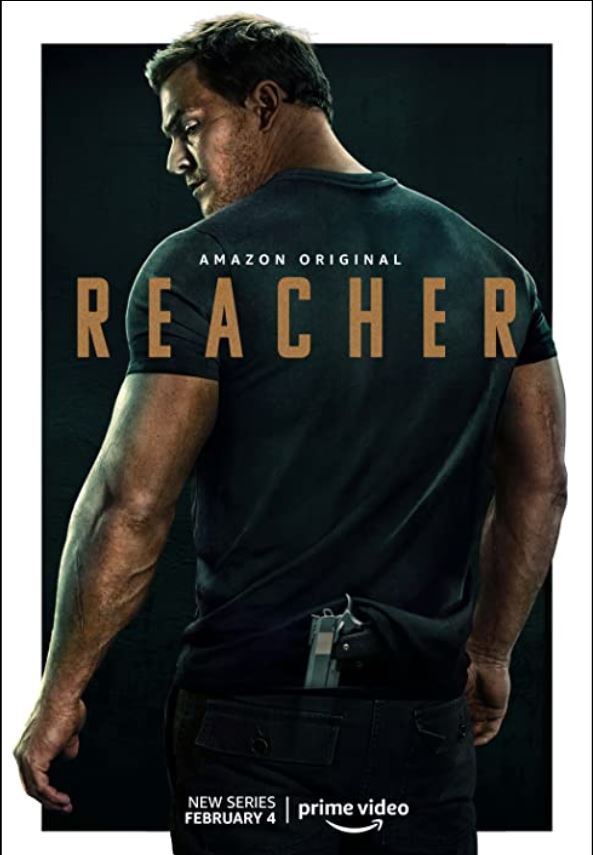 Reacher is an action series available from Prime Video and is based on books by Lee Child. I watched and am reviewing the first 8 episodes of Season One, which aired on Prime Video Feb. 04 2022. Reacher stars a bulked up, jacked up and totally bad-assed Alan Richtson. He is huge. Bigger than Dolph huge, and even though he is listed in his bio as 6’2″, he is 6 ft. FIVE in the movie, and looks even bigger. One of the complaints about the Jack Reacher movies is that Tom Cruise was not big enough to portray the character in the novel. That concern has been addressed.

I watched the 8 episodes of this made for TV mini-series over a two-day period. The episodes range from 45 minutes to less than an hour. We start with a light traveling Reacher visiting the small town of Margrave to visit the resting place of a famous blues singer. This innocuous beginning quickly escalates into multiple horrific murders and the revelation of a vicious international counterfeiting ring, run by the city’s leading benefactor.

Reacher is initially a suspect in the first of the grisly murders, but after he is cleared, things change dramatically. Because of his military police background, and due to the shocking discovery of the identity of the first victim, Reacher is unofficially recruited by police detective Oscar Finlay (Malcomb Goodwin) to get to the bottom of the murder.

Throughout the 8 episodes there is better than usual character development, plot twists and turns, betrayals, beat ups and beat downs (PROTIP: Just don’t fuck with Reacher) and some horrific violence. Prime Video does not pull any punches with this one. Hallmark, this is not. The visual violence is memorable, but Nick Santora does not rub our noses in it for just shock value.

One key to a successful movie or TV show is character development, competent acting, and the ability to make the audience care about the main characters. This is where Reacher excels. Alan Richton was perfect as the laconic Reacher and his physical prowess was matched by his uncanny ability to analyze a situation and to implement an appropriate action plan. Willa Fitzgerald was spot-on as the gritty cop Roscoe, as she and Reacher teamed up with Detective Finlay (Malcomb Goodwin) to try to solve the murders and bust the cloaked in cow feed crime syndicate.

Any great thriller usually has the good guys that we root for and love, and the villains that we loathe. In Reacher we have some despicable villains, especially the corrupt mayor Grover Teale (Bruce McGill) and the super creepy son of Kliner Sr. (Currie Graham), KJ (Chris Webster). KJ is originally portrayed as just a spoiled rich punk, but you will just have to watch the series to see the depths of his depravity.

Reacher is not a classic super-hero, but he comes close. He walks the tightrope of having a god-like power but with human emotions and vulnerability. The episodes are action-packed with realistic fights and sprinkled with occasional bits of humor to break the tension. This series is for mature audiences because of graphic violence, some nudity including a full-frontal male (dead) and one brief sexual encounter. This one is not exactly for the kiddies, so consider this before firing up this highly watchable series from Prime Video.

7.5/10.0 With The Goatesian Rating Of Another Solid Winner from Prime Video