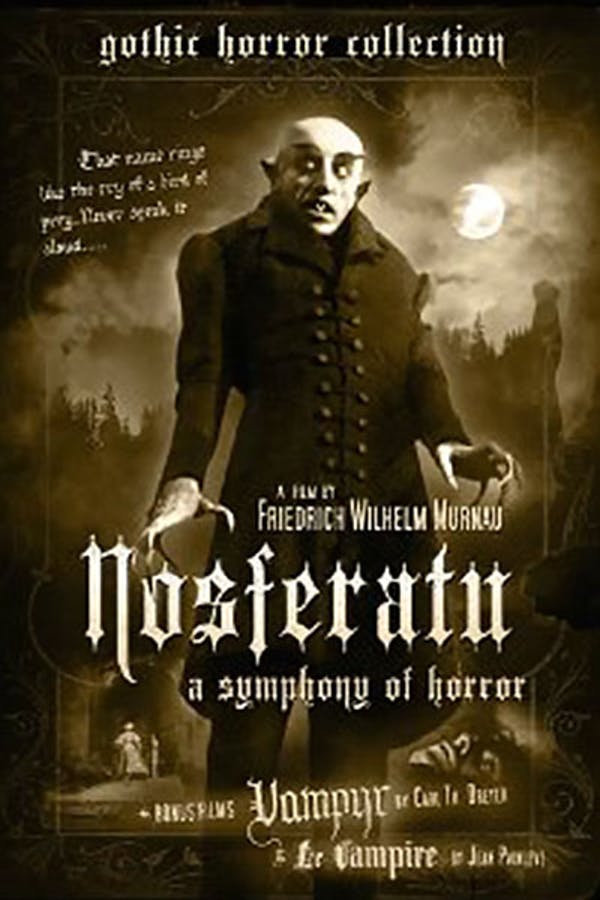 The first real vampire movie ever made is still terrifying

It has now been a century since the release of the first real vampire movie, F.W. Murnau’s somewhat loose adaptation of Bram Stoker’s 1897 novel Dracula. In Nosferatu: A Symphony of Horror, the names of characters were changed, along with many plot details, and still there was a lawsuit brought by Stoker’s heirs, and a court order that all prints of the film be destroyed. As in so many cases, it was best the law be disobeyed, and thankfully several prints were spared.

Now, 100 years later, Nosferatu holds up remarkably well, as not only one of the greatest films of the silent era, but also still one of the best vampire movies ever made.

The plot is basically a stripped-down version of Dracula, with characters such as Van Helsing (here called Professor Bulwer) minimized, and others, such as Mina’s friend Lucy and her trio of suitors, excised entirely. The really important players here are primarily Jonathan Harker (Thomas Hutter), Mina Murray/Harker (Ellen Hutter), Renfield (Knock), and of course Dracula (Orlok).

Ellen (Greta Schroder) is introduced playing with a fully nude cat, which must have been shocking for audiences of the time to see. Her loving fiancee, Thomas (Gustav von Wangenheim), is soon to leave her on an extended business trip, to which news she reacts with what seems to be an inordinate amount of foreboding. The heightened acting style of silent film adds to the otherworldly strangeness of the movie long before the vampire arrives on screen, especially when viewed from a more modern perspective.

“The agent Knock was a strange man, and there were unpleasant rumors about him.” So we are introduced to Hutter’s employer, Knock (Alexander Granach), another prime example of the heightened style of silent-movie acting. Indeed, with his beady, constantly moving eyes, Gollum-like crouching posture and silent cackle, Knock epitomizes Stephen King’s famous complaint about Jack Nicholson’s performance in The Shining, that “he’s crazy as a shithouse rat” from the beginning, even before the influence of the evil entity. This might be intentional here, as there is a hint that Knock is already in league with or being controlled by the vampire even before he loses his shit enough to be institutionalized. “You will have a marvelous journey to Transylvania,” he tells Hutter, “and young as you are, what matters if it costs you some pain, or even a little blood?”

Followed, of course, by a kooky cackle.

The “phantom” driver of the coach that ultimately takes Hutter to the Transylvanian castle (after the mortal townspeople have refused to go further) is clearly the vampire himself, here known as Orlok (Max Shreck), a detail that is more ambiguous in other adaptations and the novel itself. The coach seems to glide as it approaches, at an accelerated speed (depending on the transfer speed of the version you happen to see), another great example of silent-movie techniques adding to the otherworldly quality of the whole film when viewed today. Likewise Orlok’s supernatural speed and strength when he loads his coffins (and himself) onto a carriage to be shipped to Germany later.

A major drawback of the silent-movie era for this story is that, due to the limited available lighting techniques of the time, it is difficult to tell when it is meant to be nighttime. We therefore see Orlok moving his coffins around and entering his new home in what appears to be the same daylight by which all the mortal human characters are conducting their affairs. With the concept that sunlight will destroy the vampire introduced so late in the movie, it does make things confusing in retrospect.

All that is a minor quibble when compared to the atmosphere of Orlok’s castle and the intense unease created by Shreck’s iconic performance in these early scenes with Hutter, as well as later aboard the Demeter, probably the film’s two most iconic and influential sequences. It really cannot be overstated how compelling Shreck is as Orlok, with his intensely staring eyes peering out from under feral brows at the blood from Hutter’s minor injury in his castle. His posture is like that of a caged rat, poised to pounce at any time.

Shreck’s vampire king is every bit as iconic as the seductive nobleman Bela Lugosi pioneered a decade later in Tod Browning’s Dracula, but infinitely more horrifying. It is difficult to imagine him blending into human society on any level, and he has no apparent need or desire to do so. This is an obvious monster, an all-too-cunning abomination that compels and repels the eye in equal measure.

After the sequence at the castle, the passage of Orlok to his new home onboard the merchant ship Demeter is the sequence from the novel that gets the most thorough adaptation here, and it is undoubtedly the most visually exciting portion of the film after that initial shock of Shreck’s appearance as Orlok. The imagery of Orlok rising plank-like from his coffin and then stalking around the deck of the ship with those wonderful taloned hands and terrifying dead-eyed stare is truly unforgettable, and a big part of the reason this film holds up much better today than so many vampire movies of the past decade or two (sidelong glance aimed at, but by no means exclusive to, the Twilight franchise).

Much more than in Stoker’s novel and most other adaptations of it, in which the curse of the vampire is restricted mostly to a few closely connected characters in London, Nosferatu treats vampirism like a plague infecting the whole town, an idea which Werner Herzog ran with in his 1979 remake, and which may have influenced other great works in the genre like King’s Salem’s Lot (Tobe Hooper’s TV-movie version, also released in 1979, was definitely influenced by the character design of Orlok for its vampire king, Barlow). It fits nicely with the film’s conception of Orlok as a rat-form vampire, spreading pestilence and horror while the town sleeps, rather than infiltrating them as another normal human, as Lugosi’s Dracula is able to do.

“Ellen had promised her husband never to open The Book of the Vampires,” our mysterious narrator, Joseph Birkmann, tells us via intertitle, “but she found herself unable to resist the temptation.” This hints at the inherent sexuality in the story of Dracula, and indeed all good vampire tales, an element too strong not to come through, even in this relatively chaste early adaptation. “Only a woman can break his frightful spell,” the supposed Book of the Vampires itself tells Ellen, and us. “A woman pure in heart, who will offer her blood freely to Nosferatu and will keep the vampire by her side until after the cock has crowed.” This idea of the virgin bait, the pure sacrifice, is certainly one of the richest veins of sexual metaphor in the vampire mythos, even without the word “cock” right up in there.

Ellen must ultimately “cheat” on Thomas in order to save him, herself, and the rest of the town from the vampire’s curse. She deceives him by feigning illness and sending him for a doctor so that she may receive her shadowy “lover,” whom she ultimately deceives and defeats as well, a double-double-cross that may make her the cinema’s first femme fatale (as if we needed another case of German Expressionism influencing film noir!)

The silhouettes of Orlok stalking up to Ellen’s room in this sequence are also among the most striking and memorable images in the film, and undoubtedly influenced Francis Ford Coppola’s use of similar silhouette imagery at the beginning of his Bram Stoker’s Dracula, released 70 years after Murnau’s masterpiece. That’s not all Coppola learned from this movie, with its imagery of a cluster of rats representing Orlok’s body at one point aboard the Demeter, and he’s far from the only one influenced by its greatness.

We see nods to Shreck’s look as the rat-king vampire, a thing of ancient and truly despicable evil, all over pop culture, from the aforementioned Salem’s Lot to the character of Petyr in What We Do in the Shadows. Over 20 years ago, Shadow of the Vampire gave us the rumored true story that Shreck (played by Willem Dafoe in the movie) was so effective as Orlok because he truly was a vampire dug up by Murnau (John Malkovich) to play the part. And, in addition to Herzog’s excellent 1979 remake with Klaus Kinski, The VVitch and The Lighthouse director Robert Eggers has long been planning his own reimagining of the timelessly evocative classic.

A full century after its controversial release, Nosferatu lives on in undead malevolence.