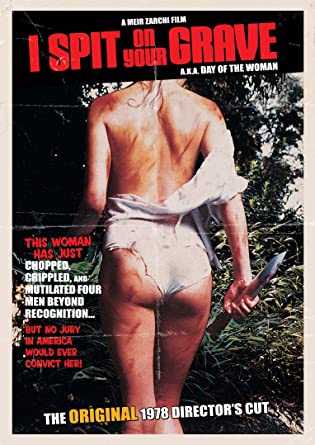 I Spit On Your Grave

What are these sick bastards doing? Bored by the prospect of going bowling yet again and the lack of choice at the local cinema, four men in rural Connecticut plump for a bit of fishing.

Oh, and rape. Lots and lots of rape.

How skuzzy are the men? Matthew’s a camp, bespectacled half-idiot only good for delivering groceries on a pushbike while Stanley and Andy are bare-chested, jobless layabouts. Well, perhaps I’m selling Andy a bit short as he has learned how to play the harmonica. In comparison, the group’s de facto leader, Johnny, is a roaring success. He’s a married father of two who runs a gas station.

During the aforementioned fishing trip, conversation runs along the lines of whether attractive women do indeed take a shit. Stanley’s confident he can settle such a delicate matter. “Hey, all women shit,” he says. “Women are full of shit.”

Stanley hasn’t finished, though. Bolstered by having just outwitted a small fish, he’s keen to share yet more wisdom. “One day I’m gonna go to New York and fuck all the broads there,” he says. In an instant, his optimism about the opposite sex has become contagious. “Yeah,” Andy pipes up, “I’m gonna do the same in California.”

Surprisingly, things don’t pan out that way, especially after Johnny decides it’s time to help ‘fix up’ the virginal Matthew with a broad.

And I think we all know what that involves.

How do the lovely ladies fare? Jennifer (Keaton) is a beautiful, willowy New Yorker who publishes short stories in women’s magazines. She’s rented a riverside cottage during the summer to write her first novel. She’s obviously a nice person and treats people well. When she meets the groceries-delivering Matthew there’s nothing condescending in her attitude toward his disability and she even gives him a sizable tip.

In other words, she meets the stock requirement of such a movie: she’s an innocent.

Still, it’s tricky to think of another flick which puts its heroine through the wringer as nastily as Spit. She not only has her bikini torn off, but is repeatedly called a bitch and slut. She’s kicked, punched, raped at least three times, and violated with a whiskey bottle (“That’s what I like in a woman,” Stanley tells her. “Total submission.”) Her fledgling attempt at a novel is then mockingly read aloud before being torn to shreds. It’s only gross incompetence and rank cowardice that prevents her murder.

Curiously, Jennifer never considers going to the cops, even though she knows her attackers and where they can be found. She doesn’t talk to any friends about her ordeal. Instead she lets herself physically heal, dons a black outfit and goes to church. As an organist plays, she kneels between the empty pews beneath a giant wooden crucifix, crosses herself, and asks for forgiveness.

Would the violence make a vicar faint? No reputable tea-drinking vicar would be able to get through his cucumber sandwiches during this one. Perhaps elderly imams, who charmingly labeled Bengali women ‘war booty’ from their mosques in Pakistan during the genocidal rapes of the 1971 Bangladesh Liberation War, would quite like it, though.

Apart from the graphic sexual violence, we also get a hanging, a castration, an ax in the back and an underwater disembowelment. The special effects, particularly the first spurt of blood during the castration, are impressive.

How fucked-up is this film? Rape fantasies are common, although, of course, none of us are going to admit that. Still, whether you’re a man or woman, there’s a massive difference between fantasizing about rape and actually wanting or trying to make it happen. I would suggest Spit taps into such fantasies and that might partly explain the way this movie has not only endured, but produced sequels and a 2010 remake. There’s a demand for such exploitative fare, you see. It’s certainly outlived its chief detractor, Ebert, while its notorious reputation as the video nasty par excellence remains undimmed after nearly half a century.

Still, after watching Jennifer’s 25-minute degradation it’s hard to walk away and think anything other than rape’s a Really Bad Thing. Spit does get this across well. There’s no blurry Straw Dogs-style implication she’s enjoying it because this is what a woman secretly wants. It’s a grueling watch and if it turns you on then you’ve got some issues. I must admit I was quite pleased I experienced no trouser stirrings. There’s hope yet I can form a mature relationship with a female.

The rape does go on for too long, though. It reminded me of the feeling I got while watching that Jew-hating piece of Christian propaganda, The Passion of the Christ. From memory about half that flick concentrated on beating the living shit out of a deluded man. Now I’m all for violence and a bit of rape in my movies, but I don’t want to watch someone being degraded for the best part of half a fucking hour. Hitting the same note is never a good idea. Just give me a few lackadaisical minutes of abuse and I’m happy. In short, Passion takes all the fun out of violence while Spit does the same with rape. Bloody hell, I can’t believe I just made a rape joke. As Blazing Saddles conclusively proved, that sort of thing is just not funny.

Saying that, I was surprised upon my second viewing by how well Zarchi’s low-budget directorial debut has lodged in my memory. Perhaps that’s because it’s a fair bit better than its (often rabid) critics give it credit for.

Yes, the audio sucks, but the direction is more than competent. Zarchi is capable of coming up with some striking images. Look at the well-composed shot amid tree trunks of Jennifer draped face-down over a large rock as her rapists depart. I also like the scene following the castration in which Jennifer dons a sheer white gown, sits in a rocking chair, and listens to opera with a faraway look in her eyes as her victim screams in the locked bathroom that he can’t stop the bleeding. Then there’s the image of her on the sun-dappled river powering forward in a speedboat with its bow in the air as she holds an ax above her head while zeroing in on a hapless victim. Indeed, Zarchi does well in repeatedly using the motorboat’s ugly engine noise to convey disturbance in the natural equilibrium.

As for the cast, I guess the mildly retarded Matthew is a troubling aspect, especially as it could be argued he’s also a victim. He’s initially none too keen to dip his wick and even helps Jennifer to her feet after the first rape. Still, the coercing of a gang member into rape does seem a staple for this kind of flick (see Savage Streets). He’s continually taunted with stuff like: “Wanna be a man, don’t-cha?” Despite becoming a rapist, it’s not enough to save him from the group’s ongoing contempt and you can understand why he later tells Jennifer: “You brought nothing but bad luck with you.”

Acting-wise, the four yokels do OK. Tabor comes out best as the gang leader. He manages to capture a sense of casual cruelty quite well, especially when he walks toward Jennifer’s bloody and battered form while blowing his nose. He’s into the whole victim-blaming thing, insisting her provocative dress sense was the reason for everything. Spit is not big on humor, but I must admit I laughed aloud when she later orders him to strip at gunpoint and he blurts out: “You don’t have to force me.”

However, has an actress ever put in a braver shift than Keaton? She’s pretty damn good here, using her eyes to convey a strong sense of numbed rage, particularly after the first rape in which she wanders naked and mud-spattered through the woods accompanied by birdsong. I’m less sure about her continued nudity after the rapes. It’s pretty screwy (and not very believable) how she engages her pussy to lure at least half of the gang to their doom. The experience of playing a rape victim obviously didn’t bother her too much, though, as she was back playing the same in the little seen Savage Vengeance a few years later.

Now I wouldn’t go thinking there’s much point to this movie, apart from illustrating through its starkly simplistic approach and the refrain ‘Suck it, bitch!’ that violence begets violence. Perhaps that’s enough to justify its existence so I would recommend seeing it once. Yes, it’s quite a deflating experience and I sincerely doubt any rape victims have ever behaved like this in real life, but Spit does have that certain quality of je ne sais quoi to it.

On a final note, I did know a rape victim in the days before mobile phones. She was a colleague and her five-year relationship with her boyfriend was breaking down, partly because she planned to move to the other side of the country to pursue a new career. We became friendly and she spent the night at my place, although very little happened. Problem was, she hadn’t told anyone where she was, leaving her conservative parents frantically ringing around everyone they knew. Once she got home, all hell broke loose with the boyfriend delivering his jealous verdict by fucking her up the ass a day or so later. I had no idea any of this had happened until she came back to see me. She said the boyfriend had always wanted anal sex but she never had. As for her immediate plans, she had no intention of reporting the crime and just wanted to focus on her new job, especially as her parents were fond of the ex-boyfriend. Of the rape she said: “Nothing prepares you for the terror of it.”

As you can tell, I’ve never forgotten those words.