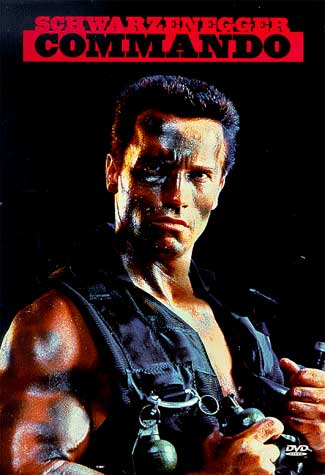 If you’re the sort of guy who dresses his semi-automatic rifle in a see-through negligee just before beddy-byes and snuggles up tight while dreaming about his erect penis turning into the aforementioned weapon and walking butt-naked down the street spraying cock bullets at all those other puny men, then Commando is the one for you.

This flick is so tough it will slap your face and make you clean the latrines with a toothbrush if you don’t salute it every fifteen minutes. It cannot be criticized in any way, shape or form, and anyone who suggests a better title would be Penile Gun Armageddon had better dive for the nearest foxhole pronto.

Just like it’s impossible to say how many grains of sand are on the average beach, it’s impossible to keep count of how many men Arnie kills during this awesome 85-minute bout of murderous mayhem. He’s a retired Special Forces colonel living in a secluded mountain retreat with his young daughter. He’s got a name and you can be damned sure it’s not anything lightweight or vaguely silly like Arthur Looney-Warde. Still, I forget what it is because I’m too busy salivating at the sight of him emerging from the forest carrying a fucking tree on one shoulder. My god, this is a man. The movie’s only four minutes old and I’m already on my knees in a state of worship. I’ll try again with his name. It might be Super Army Soldier. No, that’s not good enough. In this testosterone-fuelled universe it would be an insult to call him anything other than Death.

Anyhow, a bunch of aggressive fuckwits are in town, one of whom is a deposed South American dictator. He wants Death to eliminate his successor because, as we all know, his countrymen are incapable of violence. All day long they do little but sew, bake yummy pastries and braid each other’s hair. There’s no way of finding even one killer for hire in that 400-million-strong bunch of pansies. No, when you need an irritating, job-stealing bloke killed, you need to fly to the next continent to coerce Death into doing the job by abducting his nearest and dearest. And you know Death loves his child because he acts so out of character around her, doing weird shit like smiling, hugging and not breaking her arms for shoving an ice-cream in his face. He even allows her to feed a friendly deer when (if alone) he surely would’ve pulled it apart with his bare hands and eaten raw.

Some army bloke arrives who’s not Colonel Samuel Trautman. No matter. He warns Death that things are looking screwy and leaves behind two of his best men as security. This is stupid. Why does he think Death needs protecting? After all, this is a man who’s so tough he can not only hear an approaching chopper before it’s even fired up its blades but smell a hidden would-be assassin at a distance of two hundred yards. And apart from that, he’s confident enough to make jokes about Boy George’s perceived lack of masculinity. Sure enough, the two ‘protectors’ prove to have ridiculously small cojones and immediately get killed by the ex-dictator’s non-baking contingent. The daughter is whisked away and Death (after leaping from a departing aircraft) has eleven hours to save her life.

Hang on, some frizzy-haired black chick at the airport is getting involved. What the hell? We don’t need ladies in this red-blooded world of gun-toting alpha males. All she’s doing is screaming and putting her hands over her face. Not once does she punch anyone, let alone dangle a dwarf one-handed over a cliff. Hindrance personified. C’mon, Death, just give this Silly Girl a slap and move on. For Christ’s sake, she’s so inept she doesn’t even know how to use a rocket launcher. She makes the rockets go backward. Her role, as far as I can see, is to show men are vastly superior while providing a running commentary on the constant display of virility. Hence, in between painting her nails and whining about wanting a baby, she says stuff like “These guys eat too much red meat”, “Did anyone ever tell you that you have a lot of hostility?” and, worst of all, “I can’t believe this macho bullshit.”

Heresy! Burn her! Burn the witch!

After a lot of car chases, phone booth destruction and security guard disrespect, they eventually get to the island where Death’s daughter is being held hostage. Stupidly, the redundant South American dictator has only protected himself with two hundred heavily armed paramilitaries. Oh, he’s also hooked up with a slightly tubby Aussie guy that I’m certain appeared gyrating in some of Madonna’s early videos. However, despite his soft, boyish skin, meticulously groomed tash, chunky necklace, chain-mesh vest, fingerless gloves and leather pants, I don’t think he’s going to be man enough to stop Death.

Talk about gnats whining around the master’s ankles.

Meanwhile, Death’s disguising himself with camouflage paint. Initially, I can’t get a handle on this as he’s not engaging in jungle warfare but launching a full-frontal assault on a handful of buildings in broad daylight. But, of course, I’ve made a dumb mistake. It’s not a case of camouflage or trying to look tough. Those temporary, superficial stripes are actually bullet deflectors. That’s the only way to explain how a man can get cornered in a shed and survive having three-hundred bullets pumped into it. At this point Death doesn’t even have a gun. Not that he needs one. He’s got a garden fork which (when given the correct military training) will always outperform an automatic weapon.

As for Death’s daughter, are you surprised she gets rescued unharmed? Sure, there’s a threat of throat-slitting at a couple of points, but frankly I suspect such a fate would have been kinder than the one she’s destined to meet. For no one, no mortal man, can live up to the impossible standards of heroic manliness set by that demigod she calls daddy. She’ll try, of course, she’ll go through the motions with the dating thing, but every dude will fail with their paltry thirteen-inch biceps and disinterest in slaughter, leaving her to become a broken-down, alcoholic man-hater.

I’m off to join the army. I don’t care I’m in my fifties, chronically unfit, have a long criminal record for sexual deviance, and weigh less than Arnie’s right leg. So fucking what? I’ve seen Commando more than ten times. What’s more, I know I won’t even have to pass on such pertinent information to the recruiting officer. I’ll just hold up the DVD, puff out my chest and give him that look, the look that gun-loving, battle-hardened beefcakes across the globe understand.

And then, finally, I’ll be able to launch my own penile gun Armageddon.