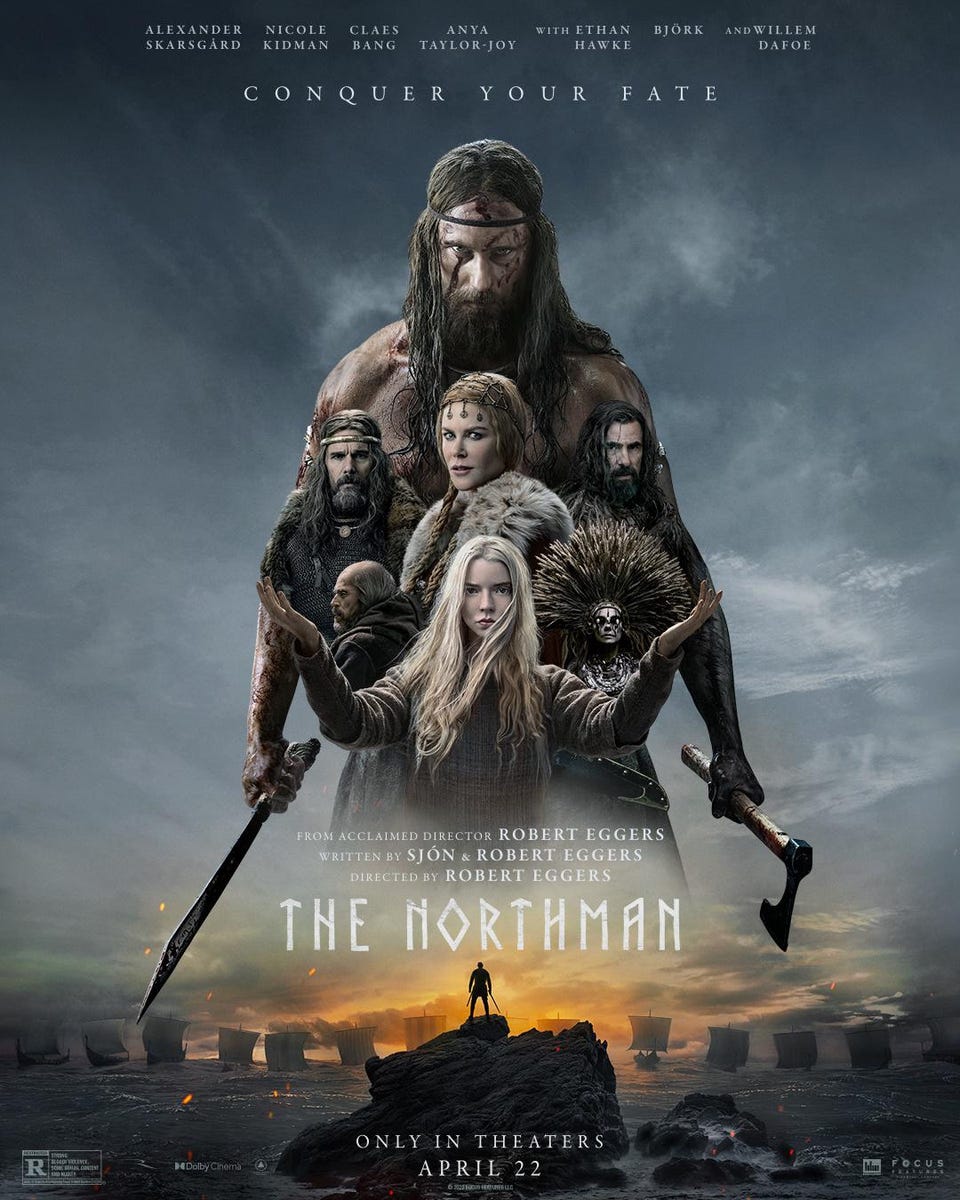 The Northman – Alexander Skarsgard is tight.

My main goal in writing film reviews is to entertain you while I tell you about a movie. While I can’t even sniff the same comedic galaxy as Pitch Meeting or Honest Trailers, I do my best to come up with jokes to make your read slightly less boring than the mind-numbingly dull dreck you get from mainstream film critics. While doing a little research on The Northman‘s main actor, Alexander Skarsgard, I discovered the name of his character in True Blood is named Eric Northman. That is unbelievable. There is a joke there – I’m sure of it, but I haven’t been able to put my finger on it. I’m sure it would be super easy and barely an inconvenience for Ryan George, but I’m going to need you to get all the way off my back while I try to think of that perfect joke.

(SPOILER ALERT – Plot stuff as usual, plus a huge THANK YOU!! to Mr. George for being hilarious.)

Young Amleth is excited at the return of his father, Viking King Aurvandil War-Raven (Ethan Hawke), from weeks of raping, killing, and pillaging. In fact, Amleth is so excited that he bursts in on his mother, Queen Gudrun (Nicole Kidman), while she is dressing and receives a scolding for not knocking. The two of them meet Aurvandil as he rides in at the head of his army, then sit with Aurvandil in the throne room as they are presented with the spoils of war. Aurvandil gifts Amleth a gold necklace, then later takes Amleth into the bowels of their temple to perform a ritual where Heimir the fool (Willem Dafoe) drugs them and they bark like dogs while hopping around on all fours. Yeah, it’s weird. I hope you weren’t expecting something straight-laced from the guy who gave us the very weird (and very overrated) The Witch (director Robert Eggers).

The thing is the scene works somehow. It might be because every representation of Vikings ever (and other Others white Europeans regarded as barbarians) shows them as barely more civilized than wolverines, so we just sort of nod along thinking “that’s probably right.” But we need this representation because Amleth is what Hiccup from How to Train Your Dragon would look like if the blue fairy made him a real boy. We need to believe Amleth is capable of growing up and becoming Alexander Skarsgard. And not the Big Little Lies Skarsgard, but The Legend of Tarzan Skarsgard.

Amleth must become this shredded, barking, raging, man-imal because his life becomes a revenge plot after his father is betrayed and murdered by his brother Fjolnir (Claes Bang). Amleth escapes his own murder attempt and we don’t see him again until he’s a Skarsgard. And boy do we ever see him. It’s some years later and he is hacking and murdering his way through a town with whatever horde of Vikings he finished growing up with. Make no mistake – he looks every bit the animal warrior that little ritual portended him to be. This is a good time to mention that if you have a weak stomach, you are at the wrong movie.

After a whole lot of violence, Amleth is visited by a Seeress (Bjork) who may or may not be a Norse god advising him that the time for his revenge is upon him. Amleth cuts his hair, brands himself with a slave mark, and sneaks on board a slave ship heading for Fjolnir’s village. On this boat, he meets Olga (Anya Taylor-Joy) who continues to be so strikingly beautiful that you start to feel like you aren’t supposed to look directly at her. She claims to be a sorceress herself and we know this is true because she looks like one.

The rest of the film takes place in and around Fjolnir’s village, which lies at the foot of a volcano called Hel. Once there Amleth, with the help of Olga, plots and executes his revenge against Fjolnir and his men. If you weren’t already on the edge of your seat after the intensity of the first half of the film, you’re going to want to make sure seat backs and tray tables are in their upright and locked position because this film has a higher gear. A much higher gear. Norse-God level, if I may.

Aside from the very straight-forward revenge plot, the film does a fantastic job of weaving in some Norse mythology and historical Viking stereotypes, displaying an interpretation of how Vikings may have lived back in the ninth century. They are calling on Odin and Freya the way us modern folks invoke modern gods. Not as formal prayers, but as a part of everyday language. We also see sacrificial offerings to the gods, witches, visions of the future, the mythical Viking berserker rage, and Valkyrie, so…far better than your typical Christian services. And definitely more bloody.

Norse mythology and history is a subject I’ve always wanted to read more about and The Northman is the type of movie that violently shoves me toward actually, finally doing it. As much fun as it is to get the Marvel interpretation, The Northman‘s depiction is far more intriguing. As uncomfortable as a couple of the scenes made me, I enjoyed every moment of the film. From the acting, to the production, to the story-telling, to the visuals, to the weirdness, there was never a moment where I thought something might have been done better. Well, maybe Skarsgard’s character’s name. Amleth is no Eric Northman.

Rating: Don’t ask for any money back, including the food that won’t sit well by the end of the film.