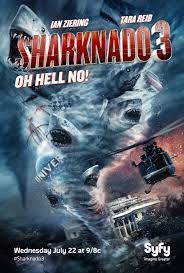 Reviewing any Sharknado movie is an exercise in utter chaos, so for this deep dive (I am truly sorry for the pun) into Sharknado 3: Oh Hell No!, I will basically just be transcribing my frenzied, disbelieving notes, but cleaned up and tweaked into coherent sentences and paragraphs. Or so I hope. I’ve seen three of these things now and I fear my mind may be forever altered. Onward!

We begin with a very brisk and pointless James Bond opening title riff, which is appropriate because “brisk and pointless” would be a great way to describe any of the Sharknado movies. We then jump right into the action, as the latest aquatic murder-beast storm is beginning in Washington, D.C.

As Fin Shepard (Ian Ziering) races to the White House, which is coincidentally the apparent eye of the storm, he talks with his shark-maimed wife, April (Tara Reid), on the phone. Ziering and Reid deliver these impassioned lines of dialogue as if they have been directed to be as monotone as possible, and in a series this ridiculously self-aware, it is quite possible they were. After this brief moment of reconnection, though, Ziering spends most of the opening 15 minutes of Sharknado 3 doing the kind of non-stop, determined running Tom Cruise usually doesn’t get to until the third act.

The appearance of Anthony Weiner’s craggy, ashamed-dachshund-like face as the director of NASA is surreal and jarring, especially now that we know how much it resembles his craggy, ashamed-dachshund-like penis. But that’s not all! Soon enough, we are treated to the equally bizarre appearance of billionaire Mark Cuban as the President of the United States, and the grotesquely reanimated corpse of Ann Coulter as the Vice-President. The previous outing had equally nonsensical cameos from a pre-scandal Jared Fogle and the late, great Biz Markie, so of course this one had to up the ante.

Speaking of which, no one has ever been paid enough to utter the phrase, “I like her,” in regards to Ann Coulter. Sugar Ray should be ashamed.

Okay, seriously, why the hell is Mark Cuban playing the President? I get the Coulter and Weiner cameos, since the third sharknado begins in D.C., but Cuban is not a political figure, or, much more importantly, a fucking actor! This movie was released over a year before Trump was elected President; how did we end up in a timeline more absurd than a Sharknado movie?

As if the cameo casting weren’t anti-progressive enough, Sharknado 3 goes full retrograde by having the first onscreen kill be a black guy. The body count rises quickly after that, but the most novel deaths (since we’re already over the novelty of people being killed by sharks that have somehow been caught up in hurricanes) are those of the sharks. One gets splattered by a vacuum cleaner wielded by a White House cleaning woman (pretty sure this is another cameo that went over my head). Another gets its face smashed in (and thereby replaced) by a bust of George Washington. Best of all, a final shark gets impaled midair by an American flag on a pole in a grotesquely tasteless parody of Iwo Jima, in which the repugnant Ms. Coulter participates.

All of the above occurs before the opening credits, which roll to the tune of the Ramones-aping theme song from the previous entry in the series.

As always in the Sharknado franchise, there are plenty of references to Jaws, because every bad movie of this type takes special pains to remind its audience of other, better movies we could be watching. The biggest payoff of these comes much later in the movie, when the main sharknado occurs at Universal Studios in Orlando, where tourists routinely get their pictures taken with a giant, dangling shark figurine from Spielberg’s classic. No points for guessing it is later replaced by a real shark improbably playing possum in order to chow down.

But we’re getting ahead of ourselves. Before we leave D.C., we get one more odious political cameo in the form of the loathsome Michele Bachmann as herself. The future of American politics should be determined thusly: if they are in this movie, never vote for them.

As Fin is driving south along the coast to meet his family in Florida, he hears talk radio pundits suggest that maybe he, Fin, somehow brings these destructive storms with him wherever he goes, an absurd notion that suddenly gains undeniable credibility when a fucking sharknado appears out of nowhere directly in his driving path. The movie, of course, does nothing further with this concept, instead opting for a brief Mad Max riff to reintroduce Nova (Cassie Scerbo) from the first movie, who is now a post-apocalyptic leather warrior teamed up with the terrifying badass known as… Frankie Muniz?

Nova and Lucas (Muniz) are basically storm-chasers who specifically follow sharknadoes, and they introduce the wildly amusing concept that the sharks are actually somehow living in the clouds for extended periods of time between ‘nadoes and subsisting on birds. This is about as intriguing as the (pseudo)science gets, and for far too long we cut back and forth between Fin’s journey to meet April and company in Florida, and what April and company are doing down there, which is fatally boring. The filmmakers make a grave error in their estimation of our interest in Fin and April’s teen daughter and her friend having an awkward courtship with two random douchenozzles, but they ultimately make up for it with two stoopid tastes that taste great together: sharknado at a NASCAR event, y’all!

Oh, fuck, Jared’s in this one, too, and he gets his famous pants snatched by a shark. Knowing how soon after the release of this movie his unsavory proclivities must have come to light, I bet the filmmakers wish they had at least had him get messily devoured, if not cut him out entirely.

This is the movie that also (finally) coins the term “sharkicane,” though it refers to a new type of storm instead of what these so-called sharknadoes have actually been all along (as tornadoes form on dry land and tend to only last minutes, while hurricanes obviously form on bodies of water and last much longer), as well as the rather clever term “biometeorology.” Frankie Muniz is almost immediately rewarded for delivering both of these bon mots by having all four of his limbs ripped off one by one. He dies a hero’s death, though, taking out dozens of sharks by hitting the auto-destruct button on his and Nova’s road warrior vehicle with his chin. Farewell, Cody Banks, we hardly knew ye.

Sharknado 3 saves its cameo trump card for the third act, with the introduction of Fin’s dad, Gil (get it?), played by David Hasselhoff, naturally. We first see him hanging out in a diner with Penn and Teller, and while it is unclear whether they are playing themselves, Teller of course never says a word. Anyway, turns out Gil was an astronaut who never actually got to go into space. No points for guessing where this is headed, either. That’s right, sharks in space, baby!

This allows the movie to make a plot point out of Reagan’s Strategic Defense Initiative, derisively known as “Star Wars,” which Gil has been secretly working on long after it was publicly supposed to have failed. It is ultimately this initiative, much maligned by the liberal press, that saves humanity from the evil of space sharks, so there’s your requisite Stupid Political Content. But that’s not what these movies are really about, so if the phrase “space sharks” doesn’t do it for ya, how about “laser chainsaw”? Cause you better believe that happens, too!

The whole movie feels like the screenplay was just a series of Post-It notes with absurd concepts scrawled on them: “Sharks in space!” “Laser chainsaw!” “Ann Coulter is a human woman!” The cameos come from all over the place, but where the previous movies had respected character actors like John Heard and Judd Hirsch slumming it for their paychecks, this one leans even more heavily on nostalgia and easy current familiarity, with its stars of daytime television, media moguls, and the absolute dregs of the political community.

Even more than the Human Centipede movies, this franchise feels like the trash heart of America. That phrase was coined by the great Pauline Kael to describe Brian De Palma’s work in the 1970s. 50 years later, this is what it’s been reduced to. With its relentlessly noisy spectacle of brutality, rampant ridiculous pseudoscience, and crass commercialism, the Sharknado series is America.