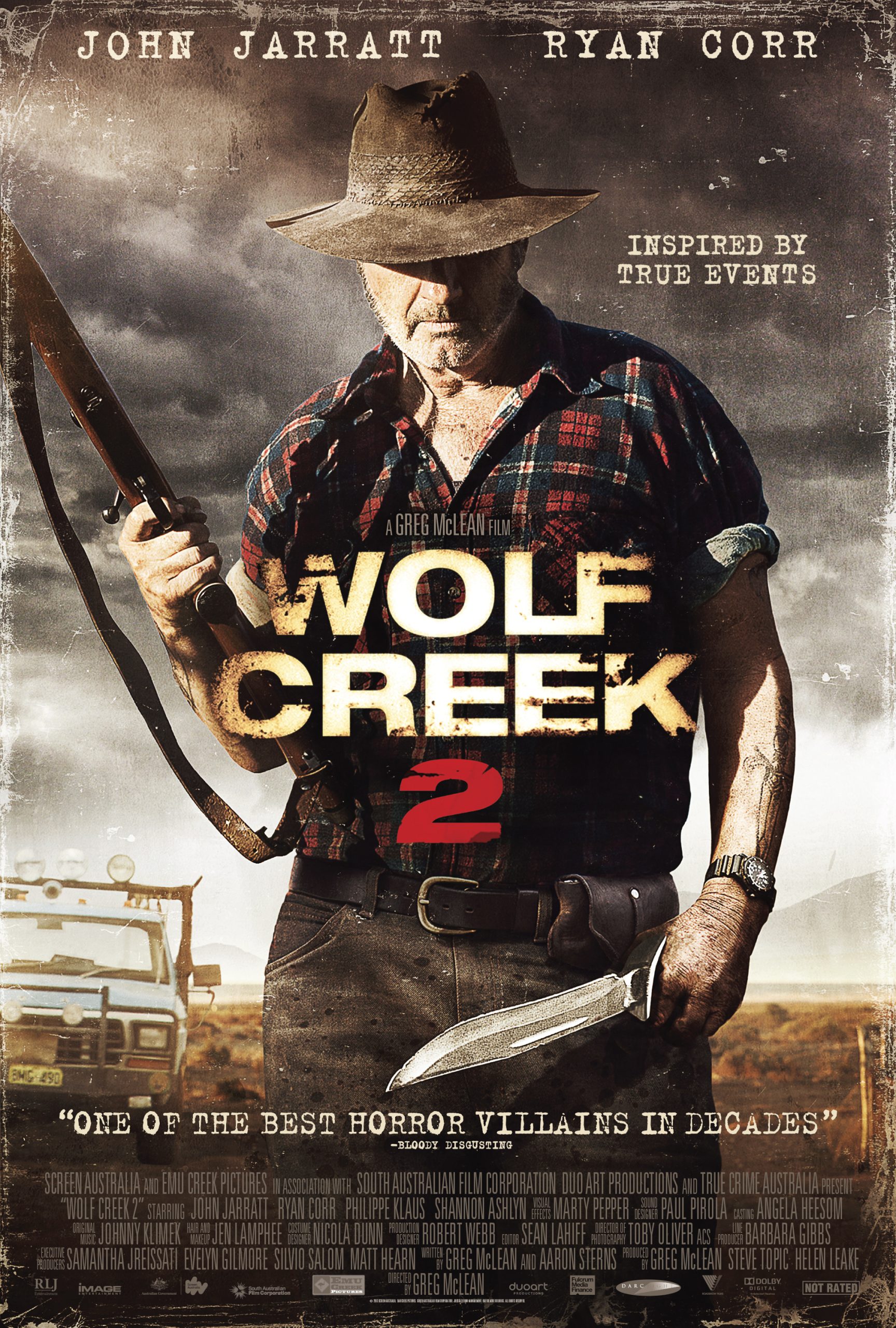 Australia. The outback. And you thought venomous snakes were scary.

What are these sick bastards doing? Actually, Ben, Kristy and Liz aren’t sick bastards. They’re lovely guys partying on the Western Australian coast who are about to undertake an eleven-hour drive inland to see the world’s second biggest meteorite crater. One of Wolf Creek’s great strengths is the steady way it builds up these three backpackers. They are the antithesis of the gormless knife fodder usually found in slashers. There’s no attempt to make them wacky, dumb or unlikeable. They’re simply ordinary, believable kids goofing around, sharing a joint and recovering from hangovers on what may well be the trip of a lifetime. Director McLean excels at capturing their anticipation, spontaneity and hedonism whether it’s gazing at a glorious sunset that borders on the mystical or jumping drunk into a hostel swimming pool.

In short, they’re young and this is what young people are supposed to do. They don’t deserve to meet Uncle Michael with his rainwater from the Top End.

Is the villain any good? Yeah, Mick Taylor is one of the 21st century’s best. With his mutton chop sideburns, thick, slicked-back hair, flannel shirt, necktie, iconic hat and politically incorrect chat (‘Sydney, poofter capital of Australia’), he’s like a mash-up of those loveable larrikins Steve Irwin and Mick ‘Crocodile’ Dundee. This is not an educated, sophisticated or enlightened man. In fact, Mick is as rough as guts, a man who will give you all the details you could ever want to hear about slaughtering vermin. At best he’s a character, playful and humorous at times, but both his appearance and chat are all part of the act. Only the occasional penetrative stare gives any clue to the underlying psychosis.

Like any serial killer who’s been around the block, he’s developed a modus operandi that borders on the slick. This is a man who will scope you out, disable your car in a remote spot and then play the reluctant Good Samaritan. It’s no surprise he catches flies with such a sophisticated trap, one that may have netted him a dozen victims. He’s obviously cunning, confident and decisive. That’s why his trophy cabinet is so full of trinkets and his killing pit gives off that appalling whiff. Indeed, when he gets down to business, he’s as terrifying as any villain you’ll see in the movies. This racist pig hunter is sadistic beyond belief, often keeping his naked, pinioned victims for months on end.

How skuzzy are the men? Ben is pretty much the only decent bloke on show. Now the movies frequently tell us the Aussie outback male is not among the most evolved of the species, but when Ben buys a shitbox car from a secondhand dealer in Broome even the salesman is a tool. Or as he opines of Ben’s female traveling companions: “They get really easy on their travels. Loosens ’em up. Mate of mine reckons he picks ’em up all the time.”

How do the lovely ladies fare? Mick’s primary interest is women, although he’s happy to watch any male bycatch being fed to a ravenous dog. He is a sexual predator who enslaves women until they end up in his killing pit. He enjoys rape, physical abuse, and psychological torture. In other words, I wouldn’t recommend this one to the ladies. There’s no empowerment here. Wolf Creek is far too believable to be anything other than a supreme head-fuck.

Would the violence make a vicar faint? Sure. The sexual violence of Wolf Creek is carried out off-screen, but McLean doesn’t shy away from showing severed fingers being scattered across the floor. Indeed, the whole ‘head on a stick’ sequence is memorably horrible, as is Mick’s skill as a sniper.

How fucked-up is this film? I firmly believe every viewer brings his or her own emotional baggage to a movie. And so if you’ve been a victim of rape, you will react to a movie about rape differently to someone who hasn’t. It’s the same with a war flick if you’ve seen combat. Even a terrific comedy like Office Space will resonate a lot more with those who’ve experienced its infuriating, cubicle-dwelling absurdities than say a plumber or a builder.

Luckily, I have little experience of life and have pretty much wasted it sitting alone in a room staring at movies. This means I can indulge in a rare degree of flippancy when it comes to the subjects they tackle. However, in an out-of-character lapse, I did once manage to backpack Oz. I drove around visiting isolated spots like Wolfe Creek. I picked up hitchhikers and sometimes ended up testing the kindness of strangers. In other words, it’s straightforward for me to identify with the poor fuckers in this nerve-shredding flick.

What’s the saying? There but for the grace of God go I.

It’s not often a flick gets under my skin like Wolf Creek. I find it deeply unsettling and can still remember a heavy feeling settling on me when I first watched it at the cinema. That feeling took a few days to lift, something I’ve never experienced with any other movie. I think this means McLean (who wrote, directed and produced) did his job well. Australia is both beautiful and menacing, its wonderful cinematography on a par with Razorback. The four leads are excellent. The first fifty minutes are a triumph of suspense. McLean obviously puts a great deal of effort into making us care about these ordinary kids before dropping them headfirst into unimaginable agony. Wolf Creek is a window into hell, one of the best outback movies, and a white-knuckle ride that once it gets going is as insistent and unnerving as the roar of Leatherface’s chainsaw.