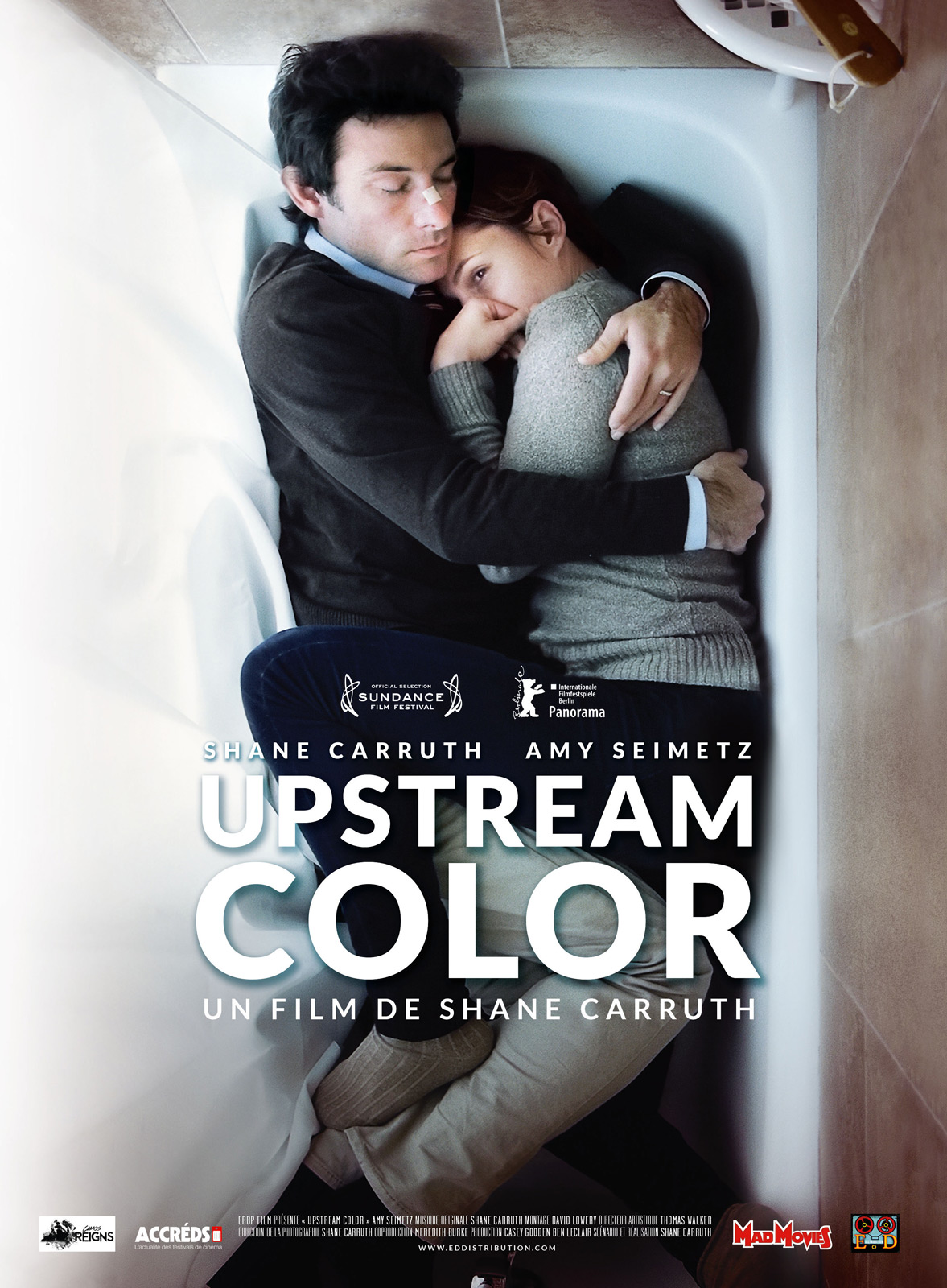 A man and woman are drawn together as their identity becomes an illusion.ÃÂ

It was a nine-year wait between writer-director-producer-actor-composer Shane Carruth’s first film, Primer (perhaps the most realistic, challenging, and compelling time-travel movie ever made), and his masterpiece, Upstream Color, an even more complex and challenging movie, and certainly a more visually appealing one. It has now been nine years since the latter was released, with no new feature in sight from Carruth, so what better time to revisit this magnificent work than now?

We open on a shot of an interlocking paper chain, symbolizing the connection between human lives that is the main, recurring theme. We then see a mysterious harvesting process, by which a blue powder scraped from the leaves of a plant, and small worms found in the soil from which that plant grows, are combined with other ingredients to make a tea. Once this tea has been consumed, the consumer gains a strange connection with another person, perfectly mirroring their movements without any apparent effort.

After being thrust into this surreal but immediately fascinating set-up, we see a man known only as “Thief” (Thiago Martins) making a purer form of the apparent drug by simply placing the worm inside an empty gel capsule, which he then forces a randomly selected woman, Kris (Amy Seimetz), to consume. Once the worm has been ingested, Kris is completely compliant to the Thief’s every suggestion, which he then uses to systematically drain her bank accounts.

A year later, Kris meets Jeff (Carruth), a man with whom she shares an instantaneous and unexplainable connection, probably because he went through a similar experience at around the same time. As their relationship progresses, he admits that he lost his job because he stole money from the company, transferring funds from one account to another until he could take it for himself. “That was smart,” she says, “waiting to tell me.”

The implication is that she has already fallen for him, and it was wise of him not to tell her this at the beginning of the relationship, when it might have been a dealbreaker, especially when she has been robbed in such a similar manner by the Thief. Perhaps Jeff and Kris were even lovers before, during the time that they now cannot remember. The movie never tips its hand, but this seems like a distinct possibility, as Upstream Color is very much concerned with the cyclical nature of relationships and events.

Interspersed with the blossoming of Kris and Jeff’s relationship (which is, by turns, tender and beautiful, and also rather harsh and pragmatic), we see glimpses of a mysterious pig farmer known only as “The Sampler” (Andrew Sensenig). It is he who removed the worm from Kris before she met Jeff, after the worm had grown to monstrous size inside her body. In a strange and disturbing medical procedure, the worm was excised from Kris’s body and transferred into the body of one of The Sampler’s pigs, which he has kept alive and healthy ever since.

The Sampler maintains a unique connection with the various people who have been dosed with the mysterious worm, like Jeff and Kris, through the pigs in whom the various worms have been transplanted, and the victims themselves have a similar connection to their pigs. When Kris’s pig becomes pregnant, for example, she believes herself to be pregnant as well, only to find that she is barren, likely as a result of the worm. When The Sampler drowns the piglets, Jeff and Kris go into an unexplainable panic, believing themselves to be persecuted by unseen forces. They end up huddled together in a bathtub, clutching a gun, a shot paralleled by a subsequent one in which their pigs huddle together for comfort in The Sampler’s pen.

Meanwhile, as the various pigs drowned in the same creek decompose, their decaying bodies give off a blue gas that feeds the orchids growing on the side of the creek, turning them blue as well. These flowers are then harvested for the blue powder used in the Thief’s concoction near the beginning of the movie, resulting in a mysterious cycle by which the drug used to steal people’s free will and memories is derived, in a strange way, from itself.

At this point, it is impossible to discuss the movie any further without getting into my own personal theory about the deeper philosophical meaning of it all. Carruth has said, “I don’t believe that narrative works when it’s trying to teach a lesson, or speak a factual truth. What it’s good for is an exploration of something that’s commonplace or universal; maybe that’s where the truth comes from.” Instead of a strict symbolic allegory, then, Upstream Color is an impressionistic experience that leaves the viewer to draw their own conclusions. The following paragraphs will attempt to elucidate mine, gleaned from multiple viewings.

The Sampler is the movie’s god figure, an omniscient being whose intentions are ambiguous and possibly even ambivalent. He generally seems like a benevolent figure, helping Kris to remove the cancer-like worm inhabiting her body, and then caring for the pig into which he transfers the worm, which represents her soul. However, when he decides for whatever reason to kill one of the soul-pigs, he is acting as a more brutal, Old Testament god, as opposed to the nurturing tender of the flock we observe in the scene in which he gets in touch with all the various victims of the treatment by communing with the pigs.

If The Sampler is god, then the Thief is the devil, a self-serving, malevolent figure that uses Kris’s soul for his own material gain. He is able to do this because of the byproducts of god’s work, which in turn gives The Sampler new souls to cultivate, in a never-ending cycle that is only broken when Kris becomes aware of The Sampler’s presence. This is in the scene in which Jeff is seated at a table with The Sampler, his head down, seemingly unaware that The Sampler is watching him. When Kris joins them at the table, she suddenly looks directly into The Sampler’s eyes, which seems to unsettle him. This coincides with the moment in real, earthly time when Kris kills The Sampler.

After the death of The Sampler, Kris and Jeff go through his files and find all the other victims of the worm treatment, sending them photos of the pig in which their worm now resides, along with a copy of Henry David Thoreau’s Walden, which the Thief made them all memorize while they were under his influence. This is how Kris and Jeff initially began to discover what had happened to them, along with a collection of shared memories they both insist happened to them and not the other, but which may have been implanted in them by either The Sampler or the Thief.

The movie ends with the various victims coming together to restore the pig farm and take better care of its inhabitants, concluding with a shot of Kris cradling her pig like the baby she can never have. We also see the harvesters, employed by the Thief to collect the orchids he needs, finding only ordinary white orchids along the creek, as pigs are no longer being killed and left to decompose there. The cycle has been broken, and the victims are now in control of their lives and souls once again.

Symbolically, then, Upstream Color seems to be saying that only by killing god and breaking the cycle of apparent collusion he has with the devil can we end the sadistic game these two entities are playing with human lives. This is an oversimplified and reductive interpretation of an extraordinarily rich and complex movie, and one I am not at all sure Carruth would agree with, but it may prove to be a useful guide for repeat viewings, which both this and Primer demand.

More than any other filmmaker working today, the genre in which Carruth works is that of a puzzle (though, like other practitioners of this pseudo-genre such as David Lynch and Richard Kelly, he seems to have faded into oblivion, for the moment at least), and the most intriguing thing about his puzzles is that they can never be completely solved.

Why, for instance, do Jeff and Kris begin to share that childhood memory of a fat kid named Remy nearly drowning them? Is this a false memory implanted in them, or is this simply what happens when two people who have undergone the treatment become close to one another?

What is the significance of Walden, or of the Husband (Frank Mosley) and Wife (Carolyn King) who we see in cyclical arguments in the middle of the movie?

These and other questions may or may not be answered by subsequent viewings. Unlike Primer (which can indeed be solved by multiple viewings and careful attention to its looping, cyclical temporal structure), Upstream Color may ultimately be impenetrable in a traditional narrative sense. It is a significantly more abstract exploration of the secrets of the universe, and an endlessly fascinating work of art.