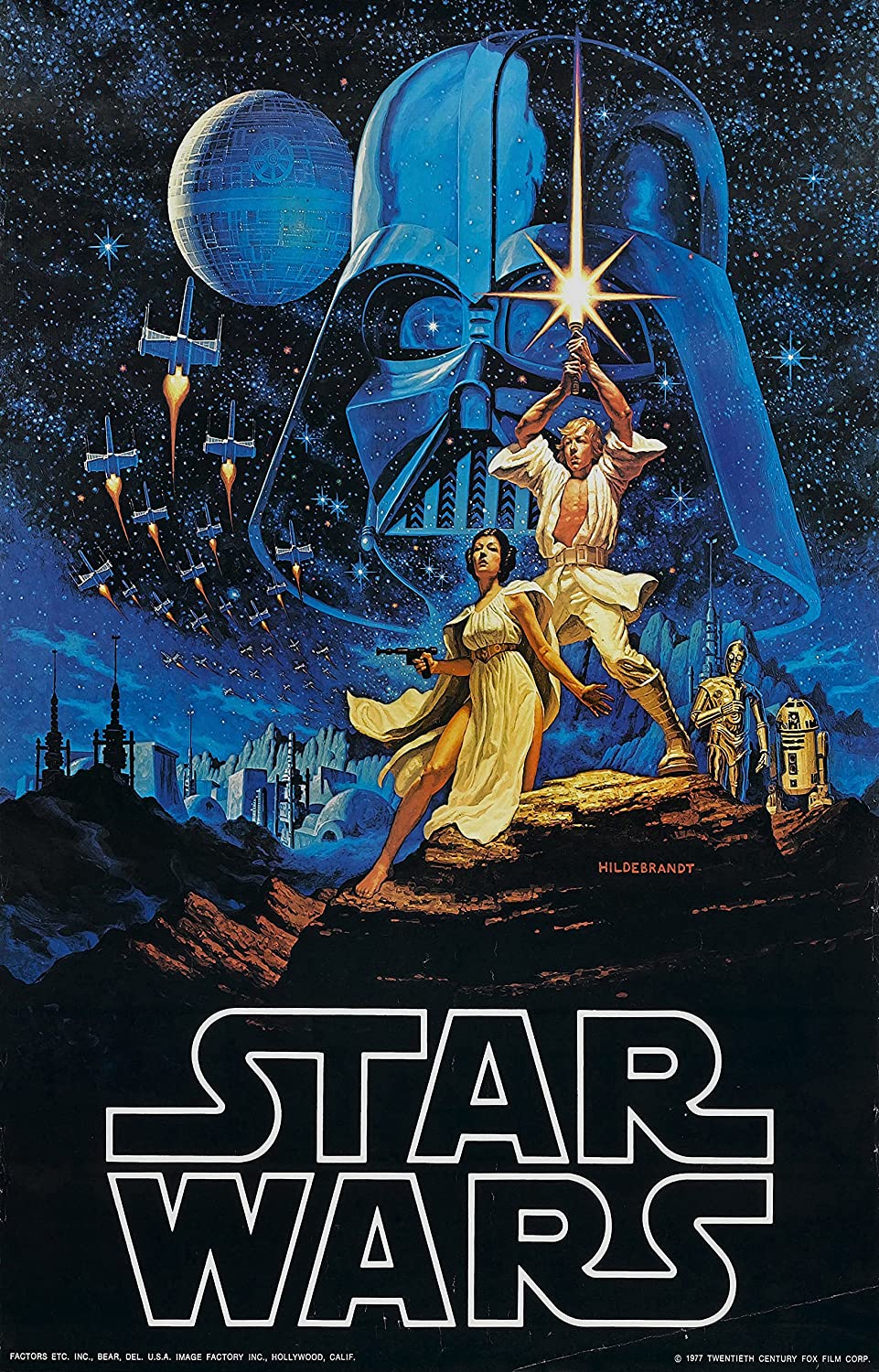 Star Wars remains the dog’s bollocks, a bona fide pop culture phenomenon, and an astonishing exercise in world-building with its fucking cool light sabers, eye-melting hyperspace travel, hokey Jedi mind tricks, planet annihilation, and lovable stormtroopers, none of whom are capable of hitting a cow’s ass with a banjo. Only a retard can fail to enjoy such a glorious intergalactic spectacle or acknowledge its gargantuan impact on cinema.

It was also Hamill’s film debut, which must surely rank among the most successful and iconic of all time. Ford, however, had already appeared in eight flicks, including quality stuff like The Conversation, but this was the first time a studio gave him a proper go. Fuck knows why. It’s blindingly obvious he’s a Proper Movie Star, underlined here when (among the good guys) the handsome bastard effortlessly walks away with the pic.

You do feel a bit sorry for Hamill because even though he’s just landed on his feet in one of the biggest franchises of all time, he can’t compete with Ford’s overpowering charisma. Is that because he’s bland? A bit insipid? Or would anyone come off that way next to a prime Ford and his scene-stealing charm? At any rate, Star Wars proved to be the launch pad for Ford, who over the next eight years turned in one artistic triumph after another whereas the fresh-faced, much shorter Hamill never escaped his Jedi identity.

Hamill plays Luke Skywalker, a dutiful, vaguely resentful farm boy with daddy issues who yearns to leave his home planet for a bit of action. He wears a judo outfit, repairs droids, plays with a toy plane and doesn’t appear to possess a snowball’s chance in hell of snaring any pussy. He’s an all-round nice guy, loyal, respectful and sincere, but also pretty anemic. When he bumps into Obi-Wan Kenobi (Guinness) and is given the chance to save a princess, he turns into a whiny teenager. “I can’t get involved,” he bleats. “I’ve got work to do. It’s not that I like the Empire, I hate it, but there’s nothing I can do about it right now.” Luckily, the two remaining members of his immediate family are turned into burnt skeletons by the bad guys, helping him ditch the weedy persona. He’s not quite Bronson yet but at least this farm boy has just had a super-itchy bug shoved up his ass. “There’s nothing here for me now,” he dejectedly tells Obi-Wan. “I wanna learn the ways of the Force and become a Jedi like my father.”

As you can probably tell, he doesn’t get any killer lines (perhaps one of the few weaknesses of Lucas’ script), delivering the clunkiest one when he bursts into Leia’s execution cell disguised as a stormtrooper: “I’m Luke Skywalker and I’m here to rescue you.”

Luke does complete a fine character arc, though, initially pansying the place up by getting knocked out by one of the not too scary Sand People before letting an old man save his skin in a bar fight. However, it’s not long before he becomes a doubting disciple of the Force, turns in a credible impersonation of Tarzan swinging on a vine, and kicks major butt as an all-action fighter pilot hero.

Ford, meanwhile, has a much cushier time as Han Solo, so relaxed that he doesn’t even bother putting in an appearance for the first forty-five minutes. He’s basically a cocksure, self-centered smuggler, flitting around the galaxy with a seven-foot tall ‘walking carpet’ who behaves like an aggressive, unshaven drag queen off her meds. Solo’s main concern is not overthrowing the evil Empire, but evading the gangster Jabba the Hutt to whom he owes a shit load of money. About the only things he cares about are his own skin and his super-fast ship, the Millennium Falcon. He treats Luke like an annoying younger sibling, frequently calling him ‘kid’ while lecturing him that “Traveling through hyperspace ain’t like dustin’ crops, boy.” Obi-Wan fares little better, getting dismissed as an ‘old fossil’. And the Force? “Hokey religions and ancient weapons are no match for a good blaster at your side. No mystical energy field controls my destiny.”

In other words, Han is sneering, condescending, argumentative, money-obsessed and combative. Shit, what’s not to like?

In fact, he bickers with whomever he meets, especially Leia (Fisher). Han’s definitely an old school kind of guy when it comes to the ladies, wary of ‘female advice’ and happy to resort to frequent sarcasm (‘your highness’, ‘your worship’) to deal with the growing sexual tension. Disappointingly, he never once makes fun of her ludicrous hairdo. Even more disappointingly, it’s the tiny whiff of Leia’s pussy that most probably makes him risk life and limb on what should have been a suicide mission against the Death Star.

And another good guy bites the dust.

Still, Han and Luke do make a memorably squabbling team, providing a solid foundation for 1980’s even better Empire Strikes Back. Bring on those AT-ATs.