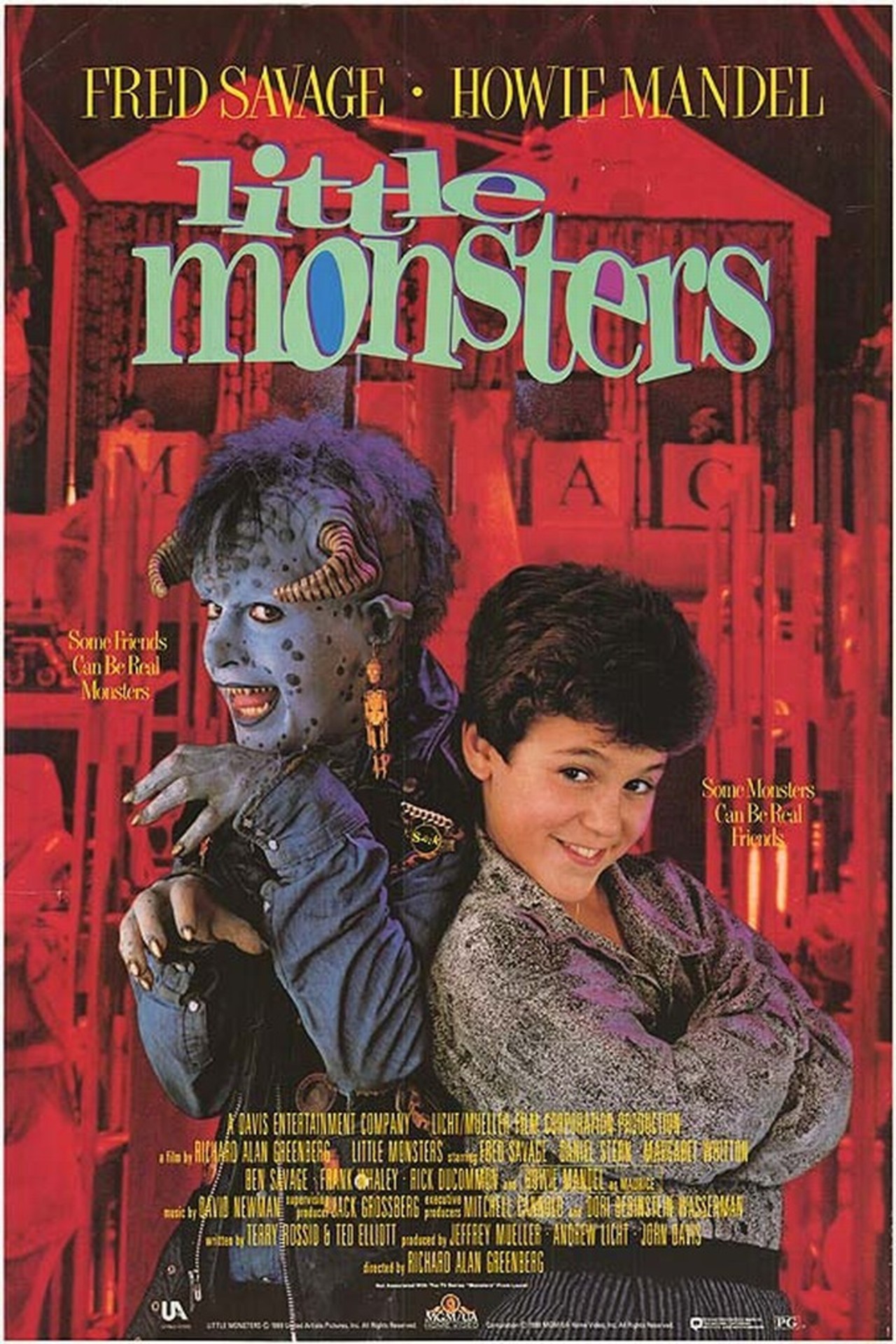 Monsters under the bed. We all know they are there.

On its surface, Little Monsters is merely a fun, visually compelling mashup of Peter Pan and Beetlejuice, as well as a movie that seriously overestimates the charms of one Howie Mandel. Beneath that surface, its intended subtext taps into common childhood anxieties about moving to a new place, fitting in, and the overwhelming dread that mom and dad might be headed for divorce. But the film’s dark, weird, occasionally scatological and inappropriately sexual tone, as well as Daniel Stern’s strangely unsettling performance as Glen Stevenson, the dad in question, suggest an even darker, perhaps unintended subtext.

I am about to retroactively ruin your childhood by suggesting that Little Monsters is about child molestation.

We begin with Brian Stevenson (Fred Savage) and his brother, Eric (Ben Savage), moving into a new place in suburban Boston, perhaps because the incestuous and abusive nature of Brian’s relationship with his father had been or was about to be discovered in their previous hometown. “They said it would be better for me and my brother,” Brian tells us in voice-over. “They always say that when they want something.”

As soon as we have settled into the new home situation with Brian and his family, the cracks begin to appear, as Glen and his wife, Holly (Margaret Whitton), fight over the common family-movie trope of Glen not being around enough due to his work. “You think I like being a stranger to my own kids?” Glen asks rhetorically, hinting at a dark duality in his nature similar to that of Leland Palmer/Bob in Twin Peaks. “Now I’m a monster,” he continues with frustrated sarcasm as the argument continues.

In a later scene, we dive deeper into the source of Glen and Holly’s conflict, as Glen shouts, “That’s all you want from me, is my paycheck!” “Well, that’s not all I want,” Holly retorts. “That’s all I get… Mr. ‘I’ve Got A Headache’… we don’t even need the door closed… take away the fighting, there’s no marriage left at all.” Glen is frustrated at work and unable to perform sexually with Holly, both undoubtedly factors in his abusive relationship with his sons.

As Brian watches a sexy lady in a bikini on television late one night, little brother Eric screams and complains of having seen a monster in his room. We see here that Brian’s attempt to move on from his own trauma at the hands of his father and explore his own burgeoning adolescent sexuality is interrupted by the ongoing abuse, now directed at the youngest child of the family. Note Stern’s creepily mocking performance in the scene in Eric’s room, almost as if he is threatening the boy with his eyes for daring to reveal his fears.

Holly laughs as Glen pantomimes being attacked by the “monster” under Eric’s bed, which is a manifestation of himself and what he has begun doing to the boy, and Brian before him. Holly is the silent partner in all this, claiming that monsters don’t exist, turning a blind eye to the abuse even as Glen contradicts her by symbolically taking on his own guilty role as the monster with his flashlight act. Later, Glen continues his manipulation of his wife and family by planting the suggestion that Eric was frightened by the sounds of Glen and Holly fighting, steering her away from the truth of what he is doing to the boys.

At breakfast the next morning, Brian gets in trouble for being up too late watching TV. Glen is then splashed with melted ice cream, a prank which Brian believes to have been perpetrated by the unknown “monster” that turns out to be Maurice. Brian is blamed, unfairly as far as we can tell from our subjective identification with him as the audience, marking the first instance of Brian acting out through his imaginary friend, even before they have properly met (i.e. before Brian has fully formulated the coping mechanism). It also shows the lack of power and respect Glen feels from his family, which he attempts to get back by abusing them. This is underlined by the following scene, in which Holly commiserates with Brian by making a joke at Glen’s expense after he is safely gone to work.

Brian involuntarily perpetuates the cycle of abuse by blaming Eric for “Maurice’s” prank, then gets into a school-disrupting fight with classic 80s bully Ronnie Coleman (Devin Ratray), another instance of Brian acting out due to his troubles at home. Eric later convinces Brian to switch rooms with him, which causes Brian to begin to confront his repressed memories of what Glen has done to him. By taking Eric’s room, Brian effectively assumes his role as the victim once again, sitting seductively on Eric’s bed in his underwear and enticing Glen to tickle him. Brian practically leaps into Glen’s groping, tickling grip, illustrating a Stockholm syndrome victim’s desire for approval leading to an active role in his own abuse.

Brian’s subsequent determination to catch the monster leads to more pranks perpetrated on Glen (stepping in the mess of Doritos Brian has product-placed around his bed, the bedroom doorknob coming off in his hand like some kind of stamp of guilt), as well as to the reveal of the first of three significant “monsters” Brian’s traumatized imagination concocts to help him process what has happened to him. Maurice is a singularly annoying creation, played by Mandel (in heavy prosthetic makeup) as a creature of pure, unbridled id and boundless energy, a perfect manifestation of the pure childhood stolen from Brian by his father’s abuse.

Brian’s imaginative coping strategy soon leads to his exploration with Maurice of the underground world of the monsters, a sort of twisted Never Never Land in which no parents can tell you what to do (ahem). Granted, many children have escaped the impending divorce of their parents by losing themselves in imaginative reveries, but the elaborate nightmarishness of the monster world hints at far greater familial problems. This is all before we get into the extremely problematic breaking and entering in order to prank other children while they sleep, culminating in the especially creepy sabotaging of Ronnie’s lunch: replacing the tuna in his sandwich with cat food and his apple juice with Maurice’s urine.

If we are to assume, as we have thus far, that Maurice is entirely the product of Brian’s imagination, then Brian has just snuck out in the middle of the night to break into another child’s house in order to watch that unfortunate child drink his piss the next day. He then falls asleep during class, due to his disturbing reaction to his awful home life keeping him from getting sufficient rest, a classic case of an abusive family situation causing failure in school.

Brian’s second journey into the monster underworld is more explicitly sexualized, as Maurice pantses him in front of a redheaded monster girl who compliments the child on his “nice ass.” “Not even my mother sees me in my boxer shorts!” an indignant Brian shouts, to which the Oedipally-minded Maurice replies, “Did you ever see her in hers?” The astute viewer will recall from the earlier tickling scene that Brian’s father has absolutely seen him in his boxer shorts, and quite recently.

It is at this point that we get a glimpse of the second of the three monsters inhabiting Brian’s traumatized psyche: Snik (Rick Ducommun). If Maurice is the imaginary friend Brian has conjured as a coping mechanism, then Snik (who is introduced casually mutilating a monster child) is the true monster, the horrifying face of the repressed abuse that haunts Brian’s dreams. We see Maurice being subservient to Snik, but able to trick him with his wits, indicating Brian/Maurice’s fear of his father/Snik mingled with hatred and a desire to defeat him. Snik’s goal is to turn Brian into a monster like himself (all monsters, we learn, were formerly children), an illustration of the common cycle of abuse in which the survivor becomes the perpetrator, the perpetuator of the cycle.

Brian resists this change in himself and attempts to banish Maurice, unaware of the darker forces at work. Maurice warns him against his own human empathy when Brian expresses qualms about their increasingly harmful pranks. “Never, ever, ever, ever, ever get emotionally involved with the victim,” Maurice tells him. “Ever.” This repetition mirrors Snik’s own speech in a previous scene with Maurice, highlighting the idea that all these monsters and their world are just parts of Brian’s disturbed psyche, and further clarifying Maurice’s role as an unhealthy coping mechanism. Even as an apparent friend and savior, what he is actually doing is teaching Brian how to be a sociopath, a monster who will continue the shameful cycle.

“If you can’t get him,” Snik tells Maurice, “I will.” He then kidnaps Eric, symbolically coercing Brian into doing what he (Glen) wants by threatening the younger, even more vulnerable boy. This leads directly to the revelation of Brian’s third psychic tormentor, Boy (Frank Whaley). Boy is the combination of the other two faces of the molester, a combination of the “charming” (Maurice) and the outright hideous (Snik) who completes the trifecta. Boy first appears to Brian in human guise and offers to let Eric and the other children he has abducted go free if Brian will stay in the underworld and “be my pal.”

In Brian’s imagination, Maurice is the father figure he wishes he had, an eternally young and childlike buddy who is unfortunately forced to serve two higher powers: Snik, who represents the cruel disciplinarian and workaholic that is causing the impending divorce (the first layer of subtext), and the highest power of all, Boy, who represents the darkest impulses to which Glen is a slave even in his kindest form (the deeper and perhaps unintentional layer of subtext).

In this way, all three of the monsters represent Glen to Brian, and he must defeat the evil forces represented by Snik and Boy in order to get back the loving father he once knew and thought he could depend upon, represented by Maurice. When he and Maurice ultimately defeat Snik and Boy, this is Brian’s fantasy of Glen banishing the worst sides of himself, though the continued existence of Maurice indicates he knows it is just a fantasy. “Where there’s a bed, there’s a way,” Maurice tells him in their final exchange, implying the possibility of escape from Brian’s nightmarish existence in the realm of dreams.

Or, ya know, maybe it’s just a dumb Beetlejuice ripoff for kids.