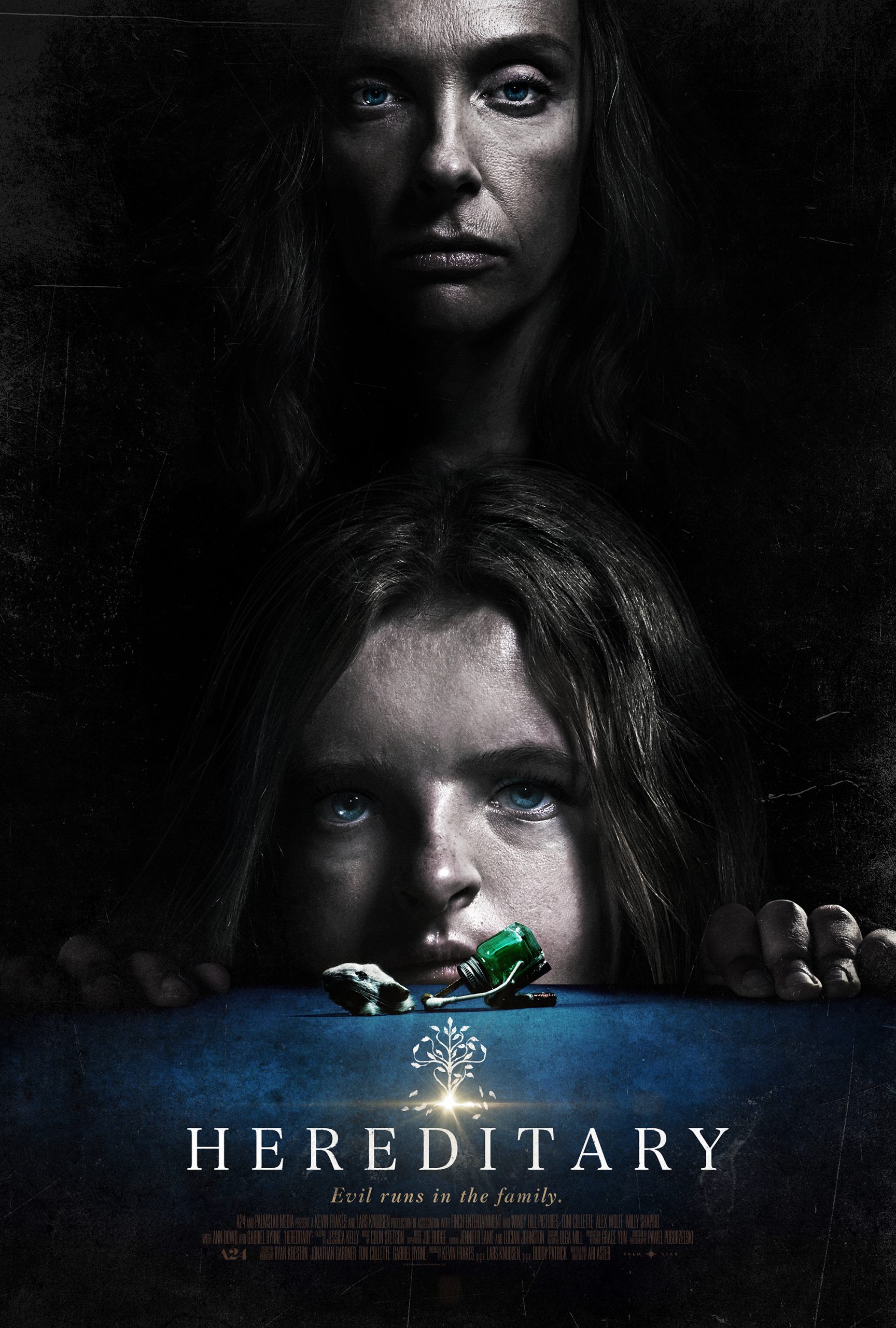 A grieving family is haunted by some very disturbing events

Approaching Hereditary, one was confronted with one of two realizations, seldom avoiding both: the hype and applause hurled first-time director Ari Aster’s way and Toni Collette’s defining performance. The first time I saw it, I knew I could be making a mistake watching it alongside two philistine family members, and I wasn’t wrong. For them, its payoffs neither arrived soon nor frequently enough, despite a freak decapitation from the get-go. The second time, however, I watched it as intended…undistracted by distracted company…and I was filled with dread. Not the sort that ghouls lurking in the doorway might inspire. It was the sinking feeling that sent me to the same hammer I wished was available, and the one self-preservation and gainful employment posed as deterrents against using.

This time, I was ready to drive that same instrument towards my temple with the sufficient torque for a debilitating blow should Aster plan to implant a visual clue in every other frame like he did with Midsommar. Kubrick was famous for having that projected onto his work though not to the tune of celluloid inserts. Because in between the production frenzy and idleness on his fabled director’s chair, pondering the most efficient chess sequence was farthest from his mind. Or life’s big questions (such curiosities, for me, rarely extend past contemplations of whether the nearest eligible female in proximity is receptive to high-risk kink).

Hereditary, was grueling, unnerving, and, thankfully, devoid of amateurish gimmicks and juvenile shenanigans like the ones just mentioned, despite deafening crescendos preceding any of its mood and intent coming into full focus. And this includes the aforementioned decapitation…we’ll call it the Mormon beheading…and, earlier still, a family matriarch’s passing to begin the film. The survivors are subjected to disturbing events following her death, but the horrors lie in how malicious forces prey upon their already frail sanities. To paraphrase that, something, or someone, is acting with agency upon this household of four. This passing might be the only clue viewers went by, going blind, and the aural cues were already making a sinister announcement belying somber-toned synopses. “Was the grandmother benevolent and worthy of mourning?” was my question.

Moreover, Hereditary‘s pace defies entrenched genre conventions. There are early destabilizing incidents, a prolonged lull, then a frantic dash to its climax that irked many. Its structure, by extension, follows the same pattern, and the film’s exposition stems from two sources. Annie Graham’s (Collette) eulogy of her mother very early and her introduction before a support group fill in the gaps for a woeful family history. It’s a pedigree that neither excuses nor justifies Annie’s maladies, merely elucidates past traumas and informs current motivations. We quickly learn that this family has never learned to be together, and that arrested development comes in all shapes and sizes. Going with the motions rarely looked so grim that pity seemed a more apt avenue than any attempt at rehabilitative healing.

One must stress the present here, for the future is effectively on borrowed time for Annie and her brood, and the film capitalizes on an immediate, in-media-res urgency to underscore that intent. Strange then, that a methodical, studied march towards a sinister resolution could evolve from the brevity of information and an eagerness to present its commencement act. The minuscule head count rounds up the minimalism. While that leaves little margin for a slasher’s body count to mount, its infamous ‘beheading’ puts the inventive carnage in said films to shame. The next Final Destination is on notice; this Mormon beheading is merely one stop along the track.

Outside of this mayhem, Hereditary was dogged by criticisms of presenting two halves and genres somewhat unevenly; that its first half was a deliberate family drama marred by an underdeveloped supernatural follow-up. While it will be long before the next casualty, the film’s treatise on grief—and simmering animosities—takes up the reins for lengthy periods. All in keeping with the slow death march its unassuming quartet is doomed to walk. I found these critiques groundless. One can present the familiar trope of a feuding family alongside the unfamiliar apprehension of demonic possessions without allocating equal amounts of screen time. So long as proportionate depth is dedicated, one need not be in the editing room, measuring lengths of reels set aside for each topic.

This hasn’t drowned out plaudits, and the film was put alongside exalted company, and hailed as its generation’s Exorcist, even. Ultimately, this claim is relative, as one generation’s ‘Exorcist’ might not measure up to another’s, much less the namesake. The film justifiably warrants being seen in the same crude physics terms reserved for Friedkinâs; that its subjects’ inertia is forced into movement. And while drawing comparisons to seminal works in similar horror sub-genres (Polanski’s Rosemary’s Baby and Roeg’s Don’t Look Now) is high praise indeed, Aster was too absorbed with steeping his film in tertiary details. Annie’s miniature sets, while fascinating to behold, serve no purpose other than to reveal her procrastination.

Knowing what they’re portraying, Aster elevates them to a narrative device that somehow relegates them beneath a gimmick. While emulating Jack Torrance’s typewriter, Hereditary‘s Chekov’s gun becomes an unused MacGuffin. It’s rather the other way around. Why would she be building a replica of her home before she’d gone over the edge? More than an ill-advised diversion, it was an egregious miscalculation, unless viewers are to see the dioramas as symptomatic of Annie’s condition or Steve’s (Byrne) selective blind eye to the elephant in the room; her deteriorating sanity. The one moment he found them objectionable was a rather cheeky one where Annie reenacts the aftermath of the Mormon beheading.

Somehow, the subtle scares work despite Aster’s preoccupation with layering a tapestry of [just enough] hints to send some on a wild-goose chase when a simple premise of one grieving woman’s unraveling mind sufficed on its own. To his credit, he spares viewers the diversion of, for example, having those mysterious scribbles explained, and further taking them out of the movie. It’s only that, on the one hand, the minutiae were not all of equal importance. On the other, she fashions a diorama of a scene she bore no witness to. Why? Just so Aster could give an old friend a job?

So here we have a fractured family with a history of mental illnesses—perhaps agendas, also—passed down through generations. Whether corporeal or supernatural, this influence is predatory and unsettling to behold at length because of Colette’s ability to coax empathy out of the viewer. Aster’s choice of writing Toni in a work-from-home part anchors the creeping isolation to the film’s logic. And the house, its occupants, and their minimal contact with the outside world, all add to the seclusion. Try as one might, how much of that is by design or default, is due to circumstance or learned behavior, is hard to distinguish with Annie. But seldom is a film this efficient in its austere use of locales, this liberal in flooding the frame with triggers and stimuli, and somehow still effective in commanding attention. Any comparison to those classics of yore, however, must pass through a recent entry first; Egger’s debut, The Witch.