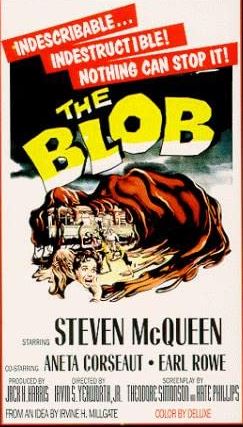 A meteorite that survives Earth’s atmosphere reveals a nightmare of flesh-eating Jello.

When I was just a young punk, there was a lot less to do and think about than there is now, and in retrospect, that was a very good thing. My life consisted of mostly going to school, going to church every Sunday morning, evening, Wednesday afternoon and the dreaded Prayer Meeting on Wednesday night.

Fortunately, there was the rare diversion when my parents let me go to the Park Theater to watch the latest cheesy, but from my perspective of history, terrifying horror movies. It was a great way to spend a Saturday afternoon, as I could count on Jesus to protect me at least on Sunday. It was making it through Saturday night that was tough.

There were many unforgettable movies such as Them, The Invisible Man, House on Haunted Hill, and of course the mind-wrecking masterpiece, The Fly. Another unforgettable 1950s classic was The Blob, starring the legendary Steve McQueen. Sure, the movie was cheesy and pretty laughable by today’s technical standards, but it does have the amazing distinction of having one of the first movie references to global warming.

A 28 year-old Steve McQueen, one of America’s oldest teen-agers was watching shootings stars with Jane at a lover’s lane, when they witnessed a spectacular meteor crash to the Earth. They drove to investigate but were preempted by an old geezer who unwittingly unleashed the contents of the meteorite. The contents were a nightmarish and voracious flesh-eating jello that attached itself to his arm. Medical intervention at the local doctor’s office resulted in a reveal of what this alien monster was capable of.

The balance of the movie was spent with Steve and Jane trying to convince law enforcement and other city officials that the threat was real, and not merely a prank by teen-agers. No one believed them until the voracious blob manifested itself in an unforgettable scene at a crowded local movie theater. The attack at the movie house was as hilarious as it was inspired as poodle skirted gals and Brylcream greased guys ran for their lives as the blob poured from the projection room.

Of course, I won’t spoil the ending, but it was a satisfying conclusion to a unique and fun to watch science fiction B movie. The movie was made in the small town of Phoenixville Pennsylvania, and they actually hold an annual Blobfest every July to celebrate the movie event. I have no idea what they do at this “fest”, so let’s Google it and find out since this event concluded this past weekend.

7.5/10.0 with The Goatesians Rating of tons of fun Sci-Fi film from a kinder era where cops shot alien blobs instead of unarmed black men.