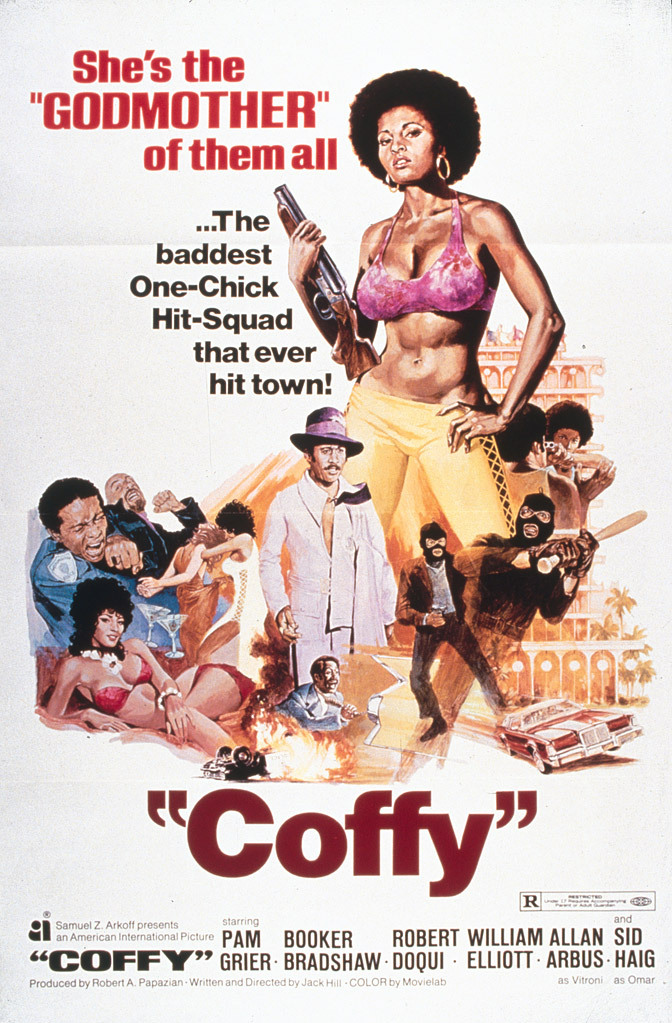 I think I’ll let the tagline do the talking: They call her Coffy and she’ll cream you!

What the hell are these crazy cats up to? Coffy’s eleven-year-old sister is in a juvenile rehab center trying to kick smack. It’s obviously time for our heroine to tackle LA’s growing drug problem by setting up a Neighborhood Watch, noting down any suspicious activity and passing on the information to those upstanding boys in blue. Then again, perhaps that wouldn’t make the best film. Instead Coffy plumps to square up to the drug-dealing baddies herself, armed with a sawn-off double-barreled shotgun and an even more fearsome pair of breasts.

Is there a racist cop keeping the brothers down? All the white cops appear corrupt and happy to hand out a beating, but (unlike the white gangsters) they’re not particularly racist. However, one problem they do have is Coffy’s former boyfriend, who happens to be a black cop. He’s got some unhealthy, Serpico-like ideas about resisting corruption and working with the people to tackle the city’s smack scourge. This dude is sincere, polite, honest, thoughtful, and good at his job. Clearly, he has no place in this particular police force.

How are the bitches and hos treated? Without exception, the women are prostitutes, topless dancers, casual lays, dope fiends or lovelorn mass murderers. For the most part they endure submissive, decorative lives in a man’s world, mainly because the consequences of getting stroppy might result in a slashed face. Still, Coffy’s no crusader for equal rights as she’s happy to wave a broken wine bottle in a hooker’s distraught face or attack a sister. She’s an intensely sexual creature who uses her voluptuous body to trick or manipulate men into getting what she wants.

However, despite her chutzpah, she is routinely insulted, belted across the chops and sexually assaulted. For example, take her encounter with Vitroni (Arbus), the top dog white gangster. He’s a short, curly-haired pervert who calls Coffy a ‘wild cat from the tropical jungle’ before forcing her to the floor and spitting in her face. “Get down on the floor where you belong,” he barks, “you no good, dirty nigger bitch.” Elsewhere, an innocent nightclub photographer is threatened with having an exposed breast cut off. Men are relentlessly depicted as abusive bastards. You’re unlikely to see a more anti-male pic. Every guy bar one is a piece of shit.

Do I dig the threads? It’s the early 70s so expectations are rightly low when it comes to looking good, but Coffy doesn’t offer a fashion disaster until the arrival of our resident pimp, King George (DoQui). He’s not quite as outrageously flamboyant as the titular pimp in Willie Dynamite, but this mustachioed, chauffeur-driven flesh peddler still manages to don a light brown jumpsuit with an off the shoulder cape, a wide-brimmed hat, oversized orange sunglasses and a silver-topped cane. In short, he looks like a cross between a stereotypical pimp and a wannabe superhero. I kept expecting him to start flying through the air, a laser beam shooting out from his cane to singe the lazy ass of any underperforming ho. King George also gets extra points for having a theme song: ‘George… George… George… They call him Mr. Cool/Don’t play him for a fool.’

Does it have funky music? Right from the bat, this one grooves, even if some of its songs are the most basic compositions possible, often consisting of little more than a couple of lines. The title ballad Coffy Baby borders on outright fibbing by labeling her ‘sweet as a chocolate bar’ and as ‘gentle as a song’. Er, what? Has the vocalist seen the sort of uncompromising shit she doles out in this flick?

“I go away for half an hour for you to turn a trick and when I come back I find you balling some nigger bitch, you white tramp!” A butch black lezzer, unimpressed by Coffy visiting her drug-addicted hooker girlfriend, has a gentle word in the ear of her beloved.

“This is the end of your rotten life, you motherfuckin’ dope pusher!” Coffy gets down to business.

“You gonna fly through those pearly gates with the biggest fuckin’ smile Saint Peter ever seen!” See above.

“Are you sure you’re not just a little black?” Coffy tries some flattery while grasping a white gangster’s penis.

“I’m gonna piss on your grave tomorrow.” Good grief, wash this girl’s mouth out with soap and water.

Are any hard drugs injected into eyeballs? Not quite, but this is a pic that’s swimming in dope. Unlike Super Fly, a movie which treats dope-dealing as a viable way out of the ghetto, Coffy is strongly anti-narcotics. Watch out for an ambitious city councilor giving an insightful speech on the black/white realities of the drug trade.

Are there any pimps roaming the hood? King George is perhaps my favorite character here. He’s presented as a cool pragmatist, but is fooled by Coffy’s daft Jamaican-flavored patter that she adopts on the basis of knowing about his predilection for ‘exotic’ women. At least George has the nous to check out the goods firsthand before putting her into his employ. He also keeps a scantily-dressed mini-harem in his home, obviously practicing the old adage variety is the spice of life in that he’s got a black girl, two whites, and an Asian broad. Or as he tells Coffy pre-bonk: “They’ll do.” What’s more, although he’s exploiting them left, right and center, they still appear to love his silky skills in the sack. “I need some real action, honey,” one devoted, frisky blond tells him, “like the kind I can only get from my old man.” George is a drug-dealing stud and (in his eyes) a fashion icon that gets to live off the immoral earnings of a stable of horny call girls. How come no teachers at my school ever talked about this kind of stuff while discussing career options?

Is Coffy any good? A year before Paul Kersey took to the streets, Coffy was blowing badasses away in this full-on vigilante pic. Pam Grier is not the strongest actress and her attempt at a Jamaican accent during one seduction scene is probably the low point. No matter, as her splendid, frequently exposed breasts never fluff their lines. Coffy also happens to be a fast-moving, action-packed flick, a strength that helps gloss over its deficiencies. Ably directed by Jack Hill, an exploitation maestro who later gave us the amusingly bonkers Switchblade Sisters, Coffy is far nastier in both its dialogue and incident. Halfway through there’s a bloody marvelous catfight which sees blouses torn open and women rolling around the floor as a ring of chortling men debate about intervening before correctly allowing the tits-exposing action to continue. It’s the sort of disgraceful female behavior you crave seeing in real life. Apart from that, there’s a plethora of violence, such as a head getting blown off and a baseball bat beating, as well as frequent nudity, zinging one-liners and a ghastly dragging death. In fact, Coffy has an unhealthy take on humanity period, offering a misanthropic hour and a half that borders on nihilism. Amazingly, its closing song then tells us ‘revenge is a virtue’ while Coffy is a ‘shining symbol of black pride.’ Nevertheless, this dubiously rightwing pic established Grier as a black icon as starkly as Richard Roundtree two years earlier in Shaft.

Coffy is a key blaxploitation pic and a seriously entertaining watch.

Do I now have a Tarantinoesque urge to be black? No, Coffy basically depicts a mini-civil war, but I could be tempted to be Coffy for half an hour or so in order to take a leisurely shower.