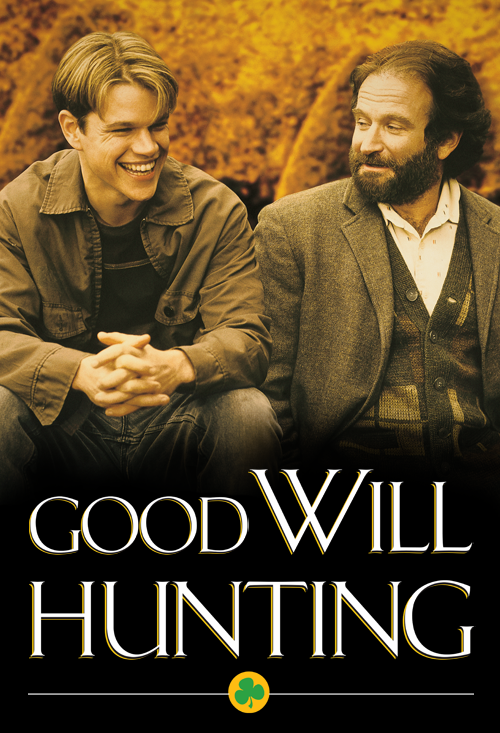 A young genius struggles with his past, his potential and his relationships.

Good Will Hunting is a movie written by Matt Damon and Ben Affleck and was directed by Gus Van Sant. It also starred the late and legendary Robin Williams who won an Oscar for his memorable performance. Damon and Affleck also won the Oscar for Best Writing and Screenplay. This movie is almost 25 years old now, but it still hits all the notes and is one of the best movies about relationships ever made.

I’m not going to do my usual review format, but just want to lay a little groundwork before I discuss relationships, which are the very essence of this great film. Will Hunting is a blue-collar young adult who lives in a seedy and run-down section of Boston. He dresses in ragged t-shirts, smokes heavily and runs with his 3 bro friends who like to fight, drink and pile up bullshit like cords of firewood. Will works at M.I.T. as a janitor. Will is also a genius, not just an average genius either. He can run laps around the greatest mathematical minds at M.I.T.

Relationships in Good Will Hunting

Will Hunting and his Bros

Chuckie (Ben Affleck) was the leader and senior member of these 4 amigos that in addition to Ben included Tom and Morgan (Casey Affleck). The most important bond is that of Will and Chuckie, who late in the film treats us to an unexpected reveal about his bitter disappointment in Will. The banter and bullshit between these four guys, with the heavy New England accents was a joy to watch. These guys would go to the matt (no pun) and literally die for each other.

Will Hunting and Sean, his therapist

As a part of Will’s probation (more later) for resisting arrest and assaulting a police officer, he was to see a therapist twice a week. Will did not want to be in therapy, so with his genius he trolled and wrecked a half of dozen psychologists before he ran into Sean (Robin Williams). After an adversarial and violent start, Will and Sean develop a mutual respect and relationship, and this is the very essence of this movie. Will has clearly met his match with Sean, and only Sean has the chance and the key to unlock the terrible secrets that haunt Will. The scenes involving the duet of Will and Sean are the best in the movie. This is arguably Robin William’s greatest movie performance.

Will Hunting and Skylar

After a chance meeting in a bar, Will and Skylar enter a relationship, which is rare for Will. The bar scene is one of the most recognizable and memorable ones in the movie as Will disciplines, wrecks and totally owns a snotty Harvard student who is trying to disrespect his best bud Chuckie. Skylar falls hard for Will and he for her. EDITOR’S NOTE: Minne Driver fell in love with Matt Damon before the movie was finished. They had a brief relationship after the film. Will has feelings for Skylar too, and she almost reaches the unreachable, but Will is incapable of expressing love and affection as a defense mechanism because of his past. The scenes with Will and Skylar are both heart-warming and heart-breaking.

Will Hunting and Professor Lambeau

The Professor is the closest thing to a villain in this movie. After he accidentally discovers Will’s genius, he intervenes in Will’s legal woes as a probation advocate to keep him out of jail. His motives are not all altruistic as he wants to harvest the genius of Will to help solve difficult mathematical problems that had stumped even the best of minds at M.I.T. Will only complies to the terms of the probation to a point, and clearly resents Lambeau’s intrusion into his life. Yes, Will has a problem with authority, especially those who endeavored to manipulate him for their own gain.

Will Hunting and himself

Other than within the safe confines of Will’s Bros, he struggled mightily with normal relationships with others. This was mostly due to his own sabotage because of fear of rejection. The rejection and abuse that he had received his entire life from foster parents. He is terrified of committing his emotions and uses his giant intellect to undermine those who are trying to get Will to confront his demons and realize his enormous potential. The breakthrough with Sean in the “It’s not your fault” scene is one of the most passionate and fulfilling scenes in the history of cinema. This is Matt Damon’s first major film, and he was magnificent.

Needless to say, if you have read this far you know what I am thinking about this movie. The acting, writing, pacing and cinematography are superior. Many critics gave Good Will Hunting a lukewarm reception, but this great film has certainly stood the test of time. This movie launched Matt Damon’s career and ultimately, he became a Hollywood superstar. It is also amazing that Matt Damon and Ben Affleck were just college students when they orchestrated this screenplay.