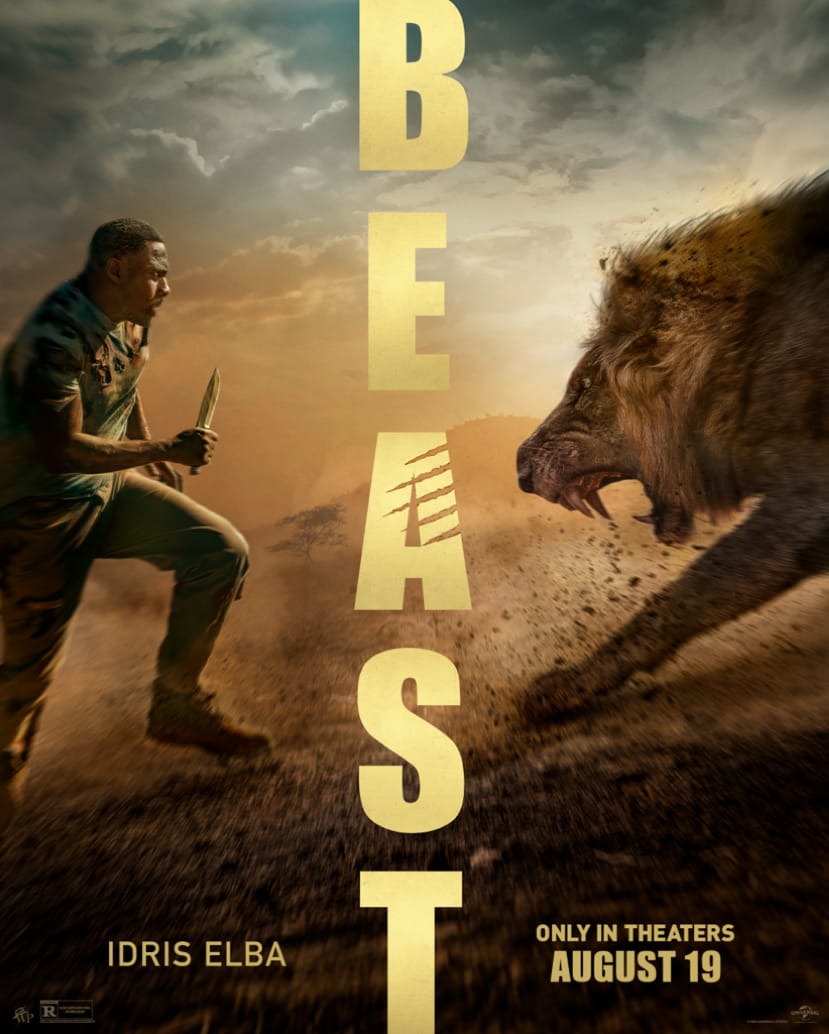 I’m not a lion tamer, but I did stay at a Holiday Inn Express last night

“Beast” – I’m not a lion tamer, but I did stay at a Holiday Inn Express last night.

I often wonder what it is about any given movie that makes people like or dislike it. For example, I recently screened Emily the Criminal, a movie so uninteresting and lacking entertainment value that every time I tried to write a review about it, my brain protested by going completely blank. I’m pretty sure I was technically dead at least twelve times last week and I gave up. Nothing about the movie spoke to me and I ended up disliking it because the story and resolution were wildly dissatisfying. Yet, 93% of critics on Rotten Tomatoes gave it a thumbs up. Beast is another movie I ended up disliking. Not so much because the story and resolution were lacking (they were), but because of specific movie tropes that make my brain go NO! Just, NO! whenever they appear in movies.

(SPOILER ALERT – I accidentally saw a preview for Beast that gave away the entire movie, even down to preview scenes being done in nearly the exact order they appear in the full film. This one’s on you Universal Pictures.)

Nate Samuels (Idris Elba) thinks the best way to fix his broken family is to take them to Africa. Thus, we arrive at hated trope number one, right out the gate – the dad with problems. This is a standard character in every action movie where a dad has to fight against some enemy. Think every Liam Neeson movie ever. Dad is either an alcoholic, separated/divorced, or a widower. In Nate’s case, he is a widower who was separated from his wife for the last year of her life. Do any of those traits matter in any of those movies? Nope. Do they matter when the Samuels are being hunted by a crazy, and possibly supernatural, lion? Nope. Just once, I’d like for that dad to just be a non-damaged dad who isn’t trying to redeem himself, but just protecting his family like every dad would do anyway.

Nate has two teenaged daughters, Norah (Leah Jeffries) and her older sister Meredith (Iyana Halley). Norah is slightly moody, justifiable since her mother just died of cancer. Meredith is an asshole. Meredith hates Nate for her parents’ separation and accuses Nate of not being there for her mother at the end of her mother’s life. This translates into Meredith being a dick at all times to all people. When Nate’s friend (and also host), Martin (Sharlto Copley), takes them to a Tsonga village, Martin tells Meredith not to take pictures without asking permission of the villagers. Meredith ignores him and starts taking pictures at will. Whenever Nate tells Meredith to stay with Norah, Meredith leaves Norah. Every time (and there were many) Nate tells Meredith to stay in the car because a lion is trying to murder them, Meredith gets out of the car. Was I rooting for Meredith to meet a gruesome death? You bet I was.

Speaking of the lion, we’ll call him trope number three, or TNT. Rather than just being a lion, TNT is anthropomorphized to the point where I wouldn’t have been surprised if he could speak English. On multiple occasions, he appears to set traps, one in which Martin verbalizes that the lion has made Martin bait, seemingly in order to lure Nate and family out of their car. TNT is also barely fazed by tranquilizers, is fireproof, and is immune to being smashed by cars. Even worse is when Martin says he’s never seen a lion do this. Disbelief not suspended, though TNT does seem like an apt name for this lion.

What does that leave for people to potentially like about this film? Well, if death-by-lion is your thing, you’ll be disappointed. Nearly all of the carnage happens off-screen. Occasionally, we see TNT burst into view when it attacks poachers, but this only happens at night, plus the victims are quickly taken out of the frame by the attack, so you don’t get to see them shredded to ribbons. Maybe you’re hoping for some dramatic near-death encounters? I mean, yes, but I hope you can accept narrow escapes typically enabled by Nate kicking TNT in the face. What about memorable performances; solid dialogue? Only if you think repeating “I don’t know what to do” and the actors performing as if they weren’t given a script counts as memorable or solid. Message about the horrors of poaching? Don’t hold your breath. How about a climax best described as “It’s just a flesh wound?” No? Um…really long camera takes? Yeah? That’s your thing? Score.

My reason for wanting to see Beast was specifically because I like both Idris Elba and Sharlto Copley. It certainly wasn’t because of the premise – Idris Elba fights a lion. It was disappointing to see both performing as if they were as confused as I was that the script tried to weave dad-tries-to-repair-broken-family-with-trip-to-dead-wife’s-birthplace with RAWWWWWRRRRRR-chomp. Or, maybe they hate those tropes as much as I do and gave the movie the performances it deserved.

Rating: Ask for fourteen dollars back and tell your teenagers to take as long a shower as they need.