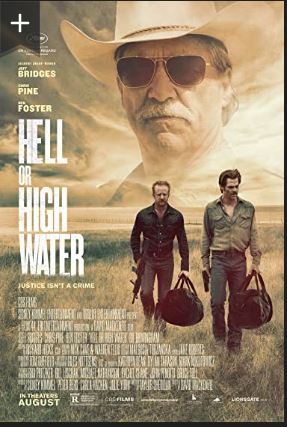 I had been intending to watch this movie for a long time. I was intrigued by that famous gas station fight scene, which I ran across on YouTube. I’ve probably watched it over a half a dozen times, and it is a very satisfying seeing some young punk getting a well-deserved comeuppance. Let me get this out of the way, Chris Pine and Ben Foster were magnificent as the bank-robbing Redneck Howard brothers. I’m hard pressed to think of a better movie tandem. However, Jeff Bridges…The Dude…Rooster Cogburn, and now Sheriff Marcus Hamilton, totally stole the show. He should have won the Oscar for Best Supporting Actor, but yeah, Moonlight in another Academy travesty. If there is a better actor alive today, I would like to hear about it.

Toby and Tanner Howard are two brothers who live in a small Texas town, a rural black hole decimated by the bad economy. Toby (Chris Pine) is an unemployed oil worker and his brother Tanner (Ben Foster) had just gotten out of prison. Tragedy has visited as their mother recently died and the family farm is being foreclosed by the Midland Texas Bank. Desperate, the two brother proceed to start robbing banks.

This is about all you need to know about the plot. Well, that and this duo of armed-robbing brothers are being tracked and hunted by another duo of Texas Rangers. Ranger Hamilton (Jeff Bridges) and Ranger Parker (Gil Birmingham). The interaction and dialogue between these two duos of characters is the very essence of this movie. I’m hard-pressed to think of a better tandem of tandems.

The pacing and writing in this movie are outstanding as we toggle between high-paced action and long periods of dialogue and reflection between the two duos on the opposite side of the law. The often racist but good-natured bantering between Ranger Hamilton and his long-suffering Native American partner were sublime. There were several long scenes of interactions in the small town where they were staked out, waiting for the bank robbers to arrive. Some scenes were beyond hilarious, like the one at the T-Bone Cafe where they were rendered speechless by the crusty old waitress.

Chris Pine and Ben Foster are in top form as the rambunctious broad-daylight bank robbers. The Tanner brothers make quite the team as they are both unkempt and scruffy, but Toby is cool and meticulous, the brains behind the heists. Tanner is impulsive, emotional and often unhinged and Foster is formidable as an unsettling and dangerous villain. You might recall him as Charlie Prince, the ruthless killer in the movie 3:10 To Yuma. Hell or High Water, however, is a movie that immediately draws the sympathy of the audience for the ‘bad guys”.

One of the most memorable and satisfying scenes involving the brothers was the one at the gas station. This scene vividly shows the concept of “pulling the wrong tail”, and the subsequent consequences. Toby is usually the cool and collected brother, but he executes a vicious beatdown of a young punk who was stupid enough to try to bully Tanner. Lesson learned; you never really know who you are messing with.

There have been many bank robbing duo movies like Butch Cassiday and the Sundance Kid, or Bonny & Clyde, but this one is one of the best I’ve ever watched. The west Texas landscape is vivid and the depiction of the decaying small towns and demoralized by recession inhabitants was quite convincing. The screenplay writing by Taylor Sheridan gives us sizzling lines and dialogue delivered by great actors. This is a modern day Western at its finest and a real winner.

10.0/10.0 With The Goatesian Rating of The Dude Continues To Abide