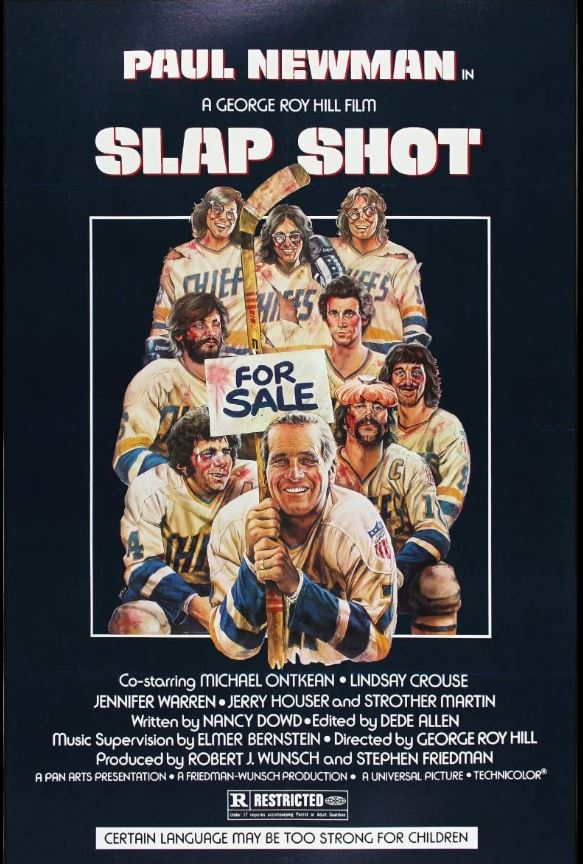 Every time I think of hockey, I am reminded of my late, great friend, Ed Arndt. Ed was a friend luckily met from the Fidonet era, in the early 90s, before the internet was what it is today. A bunch of us guys would go to the hockey games at the Memphis Mid-South Coliseum. I remember fondly that my wife insisted that I take her along with me. Okay, I did, and once was enough for her. She never asked again to be thrust into such an atmosphere of profanity, vulgarity and violence. This experience was one of my fondest in the realm of managing relationships.

Of course, none of this is important when considering Slap Shot. This movie was predictably hated by the critics for the violence, profanity and it’s low-rent subject matter of minor league hockey. Well, to Hell with them. We are talking about Paul Newman here, not to mention the best set of triplets ever to hit the silver screen, the Hansons. Nothing more is needed for one of the greatest sports comedies ever produced.

The Chiefs were a languishing minor-league hockey team in the rust-belt town of Charlestown Pennsylvania. Both the team and the town were on a downward spiral to the inevitable. Jobs and games were being lost and it was rumored that the steel mill was closing down and that the team would be sold and moved to Florida. Morale was at an all-time low and the has-been coach, Reggie Dunlop (Paul Newman) was desperate to turn things around. With limited resources and an apathetic team and fanbase, it did not look promising.

The team was aging, injured and losing, so General Manager McGrath (Strother Martin) picked up the Hanson, triplets who liked to play with hot wheels when not at the rink. Dunlop was not happy with the acquisition until injuries to key players forced him to play them. “Show me what you’ve got!”, he challenged them, and what followed was the greatest scene in hockey movie history.

The Hansons hit the ice as a single organism, immediately laying waste to the opposing team. They body-checked, high-sticked, tripped, blind-sided, punched and bloodied the hapless opponents. The crowd went wild, and when the refs finally ejected this trio for their violence, they were the new town heroes.

Other than the carnage on ice, the plot revolves around the ever-looming question of the future of the team. In spite of their newfound success, this team was still a money losing proposition. This comedy also manages to parallel precariousness of some of the team member’s personal lives and relationships with their women. These relationships are every bit as shaky as the future of the team. Slap Shot really succeeds not only as a raunchy and violent sports movie, but as a hilarious comedy and a drama.

As well as being highly enjoyable movie, with comedy, action and memorable characters, Slap Shot also gave us subtle political commentary on the mindset of the sports fan, especially that of winning at any cost, with blood spilled and bones broken. The games were a caricature of actual professional hockey, with a little WWF thrown in, but in reality, not far from the actual truth.

7.5/10.0 With the Goatesian Rating of Paul Newman Cannot Make a Bad Movie