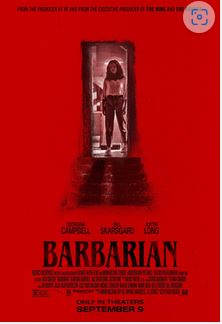 Just say no to AirBNB

There are a couple of film genres that I generally try to avoid. One genre is comedies that rely on embarrassment humor. Meet the Parents and Anger Management are two prime examples of comedies that I did not find amusing in any way, shape, or form. In fact, my mood went the opposite way, to the point I wanted them to turn into slasher flicks. The other genre is disturbing horror or just Gross. I’m not talking about movies like Se7en or Silence of the Lambs or even Saw. While they are disturbing and horrifying, they are great movies with amazing stories and even better acting.

No, I’m talking about movies where the disturbing part is the only thing the film is interested in. Movies like The Hills Have Eyes and Hostel. For the life of me, I don’t understand people who enjoy watching these particular movies. Beyond that, I especially don’t understand the people who want to make these particular movies. I understand the pleasure found in being scared by movies or scaring an audience, but I draw the line at a disfigured inbred sucking a terrified and trapped, under-aged woman’s breast for milk. Yeah, someone wrote that down, convinced a studio executive to fund it, convinced actors to portray it, then filmed that nightmare. And, some people enjoyed watching it. The only thing I’m taking from that is to never leave my drink unattended near any of those people. And by near I mean within the same state.

(SPOILER ALERT – I’m only going to spoil parts of the plot, not the horror stuff, which is all this movie cared about anyway.)

Barbarian is the latest film in that gross genre. You know you are watching a film in this genre when you realize the plot consists entirely of contriving a way to put characters in the place where horrible shit is about to go down, then focusing solely on the horrible shit. In Barbarian, Tess (Georgina Campbell) has a job interview in Detroit and has rented an Airbnb house. She arrives at the house late at night, finds the key missing from the lockbox, and her calls to the property manager go unanswered. She also notices that there is literally no light on at any other house on the street or the street itself. Just as she is about to leave, a new light in the rental house flicks on. Tess hurries to the door, ringing the doorbell until a strange man named Keith (Bill Skarsgard) answers the door. After informing each other that each has booked the house, Keith convinces Tess that she should stay because “have you seen this neighborhood? You shouldn’t be out at night here” and “you won’t be able to find a hotel room because there is a conference in town.” He even offers to make her a cup of tea.

I am giving you the details because this opening sequence does a good job of setting up a potentially terrifying plot. Everything about Keith and this setup screams psycho killer and nobody in the audience believes that the double-booking is just a coincidence. It makes the audience question everything they are seeing in anticipation of whatever horror awaits. Just a couple minutes in and the tension is already palpable. This is also the last time where any such care is given to writing.

This is where the film starts asking you to suspend your disbelief for a series of increasingly absurd things. Really, Tess believes every hotel room in all of Detroit is booked for a conference after making a single call to one hotel? And Tess somehow didn’t know about a conference so big it occupied the entire hotel space of a metropolis of 3.5 million people? And Tess is going to stay the night in a weirdly nice house in the middle of an abandoned, dilapidated neighborhood, with a complete stranger who looks very similar to the guy who played Pennywise? Really, Tess doesn’t immediately tase Keith, jump in her car, and tear off into the night? Disbelief not suspended.

Later that night, we get the first real clue that Keith may not be the threat, or at least not the only threat. Tess is awakened by her bedroom door opening, then hears footsteps rush away. She pops out of bed and finds Keith still asleep on the couch, but clearly in the midst of some kind of bad dream. She wakes him up, he denies opening her door, and the two of them go back to sleep. *Sigh* Yeah, it’s going to be your typical horror movie where characters do the dumbest possible things in order for the movie to happen.

Tess wakes up the next morning, finds Keith gone (but he left a note), sees the neighborhood in all its Dante-ish horror, goes to her interview, then returns to the house despite her prospective employer all but telling her she will not live through another night there. Hell, she even gets a warning from the cliched weirdo/local vagrant screaming at her to get out. And because this is a standard horror movie, Tess will ignore those warnings and even end up in the basement, where previews have shown us a spooky tunnel exists.

For about two seconds after discovering the tunnel, Tess is having none of it. Except, she’s locked in the basement without her phone, defeated by a thin door with a flimsy doorknob, so of course she changes her mind. Who wouldn’t explore a secret tunnel opened by a rope through a hole in the wall? Especially if you didn’t have any way to light up the tunnel besides using a mirror to reflect some light? I told you, this movie HAS TO HAPPEN! There will be no thinking about it, especially from Tess.

Don’t worry though, I’m not going to spoil what happens next because it is actually pretty freaky. Once this sequence concludes, the film jumps to a whole new character and setting, completely destroying the mood the film had built. Sure, the first half with Tess and Keith was extremely standard horror fare, but I will at least give the film credit for building a compelling mystery loaded with suspense. So, why the fuck are we suddenly in a moving car with actor/alleged rapist, AJ (Justin Long)?

AJ is the owner of the house and goes there because he needs to look at it in order to sell it in order to fight the rape allegation. You know what – never mind. It doesn’t matter. Just like the job Tess is interviewing for doesn’t matter. Just like Keith’s occupation doesn’t matter nor does the reason he rented the house. Just like double-booking doesn’t matter. Nothing we’ve seen or been told matters in relation to what we discover in the tunnels. In fact, the stuff in the tunnels is so poorly developed and explained that the film forces the vagrant to vomit some quick exposition two minutes before the credits roll. Even a flashback giving us the origin story serves only to confuse us more. Of course, by the time that happens, the film will have completed its actual goal – to gross you out.

Clearly, I was not impressed with this film. It boils down to being very disappointed in a film that absolutely wastes a solid start, succumbing to almost every horror stereotype in the books, including believability. The gross out factor was just the final straw, pushing me to actively despise the film. Once everything was laid out on the table, none of it made any sense. I can’t stress enough how impossible it was to swallow any of the reasoning tying the characters to the house, including what’s revealed in the tunnels. And the film doesn’t even make a passive attempt to make us think AJ might be involved. Despite clearly having been in the house before, he is completely unaware of the tunnel and is totally unphased by the state of the neighborhood. If you are the type of person that enjoys this kind of film – gross.

Rating: Non-gross people should ask for sixteen dollars back.