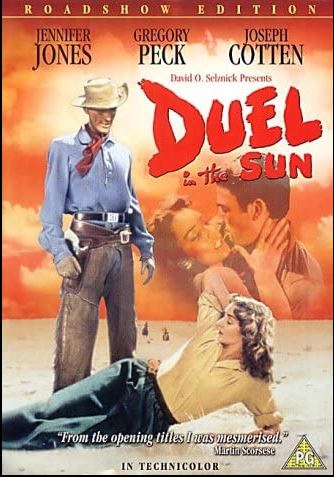 Duel in the Sun

David O. Selznick wanted another big blockbuster like Gone With the Wind. He had room for plenty more Oscars on the ego shelf where his awards were available for all to ”ooh and aah” and offer praise like, ”You did a hell of a job on that one, Mister Selznick”.

There for all to see, unlike that Commie heathen Charlie Chaplin who used his as a doorstop. The worst kind of iconoclast.

Yeah, he’d made some good movies, but nothing close to Wind. He collected a second Oscar for Hitchcock’s Rebecca (consider what was implied by Hitch when he had Raymond Burr, the wife killer in Rear Window, made-up to resemble Selznick).

Production began in 1945 as the War was winding down (that’s World War II to you Tarantino fans). Like Gone With the Wind, master producer Selznick had numerous directors shooting numerous units. Clearly a disciple of Thalberg he would have had nothing but disdain for the auteur theory.

Selznick hired King Vidor for his noted visual style, and some big-name actors like Jennifer Jones, Joseph Cotten, Gregory Peck, Lillian Gish and Lionel Barrymore. He was having an affair with Jennifer Jones at the time so casting her must have been easy.

Her character Pearl Chaves is lightyears from her character of Bernadette Soubirous in Song of Bernadette. Pearl is one hot babe. The adjective sexy just does not do her justice. Not by a long shot.

Chief Censor Joseph Breen over at the Hays Code office that enforced the Production Code believed that she was too sexy, too. (Breen would find the right-wing kooks over at today’s Supreme Court to be like-minded bigots).

The thinking at the Hays office went like this: adults who had endured the Great Depression, then went on to defeat Nazi Germany and Imperial Japan would be so corrupted by on-screen lust they might rape and pillage the downtown shopping area and export the mayhem to the burbs.

So, the completed film was returned to the cutting room to make the cuts, thus saving the sanity of moviegoers.

The story: Pearl Chavez (the hot and tasty Jennifer Jones) is sent to live with her father’s old flame Laura Belle McCanles (well played by silent film star Lillian Gish) in hopes of keeping her on Virtue Street, but the way that girl looks in this film you just know that if she doesn’t stray over to the red light part of town on her own, someone will drag her over (it’s Texas, after all).

Pearl’s Pa Scott Chaves got his neck stretched for shooting his wife and her boyfriend after finding them in the sack together. Yeah, they hung him for that! What happened to the Code of the West? I thought it was Texas! But you just know if hapless Pearl had not been sent to the huge Spanish Bit ranch to live with Laura Belle and her crabby husband, Senator Jackson McCanles (think Charles Goodnight, played by Lionel Barrymore doing his Henry Potter imitation.), she would have found herself in a Storyville whorehouse right quick.

The Senator just doesn’t take to the poor girl. He’s a garden variety Old Time Texas bigot who resents the people he stole his ranch land from (not the best syntax I know, but this ain’t the New Yorker, and I sure ain’t a New Yorker writer). Pearl is a mestizo, her mother was what they called back in the bad ol’ days, an Indian. There, I said it.

In a vain attempt to avoid trouble, the Sinkiller himself, Jubal Crabb (Walter Huston) is summoned. He explains the eternal verities (to borrow and corrupt and a phrase from William Faulkner) and in so doing stops sin its tracks, for a couple of reels, anyway.

This was the introduction to the Bible part. There are the two sons of the McCanles’: The good, brave, clean and reverent Jesse (Joseph Cotton), lawyer, progressive politician who is favor of fencing of the grazing land, and Lewt (Gregory Peck), a villain Ma Joad would have  called ”mean-mad”. Too handsome for anyone’s good. He promises to marry poor Pearl and then renege. She gets another fella to marry her but Lewt shoots him. Dead.

The Lewt/Pearl love story is on hold as the narrative briefly takes a detour to visit traditional Western lore. The fencing of the grazing land, the coming of the railroad, the sodbusters preparing the land for the dust bowl in just a few years to come.

King Vidor provides a nice bit of cinema with a confrontation between the cattle baron on one side of the barbed wire, and the sodbusters and railroad, supported by the US Calvary,on the other. Son Jesse sides with the railroad.

The Lewt/Pearl hot romance proceeds just fine and rocky until we learn Jesse is sweet on Pearl. After a stern warning, Lewt gut shoots Jesse. (Here comes the science fiction/fantasy part): we are told Jesse will survive the shooting just fine.

Laura Belle departs the mellow drama after a well played death bed scene (sniff). Jesse rides in on the outlaw trail to see his Ma before she departs on the wings of angels, but arrives too late.

This puts him in an even fouler mood and he decides to settle brother’s Jesse’s hash once and for all. He rides off into the badlands to plot the murder.

A ranch hand tips Pearl off as to Lewt’s plans. She grabs a Winchester and rides out to stop the man she loves from killing again.

Now, we come to the ending that is so improbable and outlandish you’d expect to find it in a Tarantino movie.

Pearl finds Lewt and shoots him, and he in turn shoots her and to add further insult to the viewer, they die in each other’s arms (really, I did not make that up).

Harry Cary was one of the biggest movie stars in the world in the days of silent films. He starred in dozens of silents for John Ford.  John Ford, he made Westerns.  He also made Grapes of Wrath and The Informer.