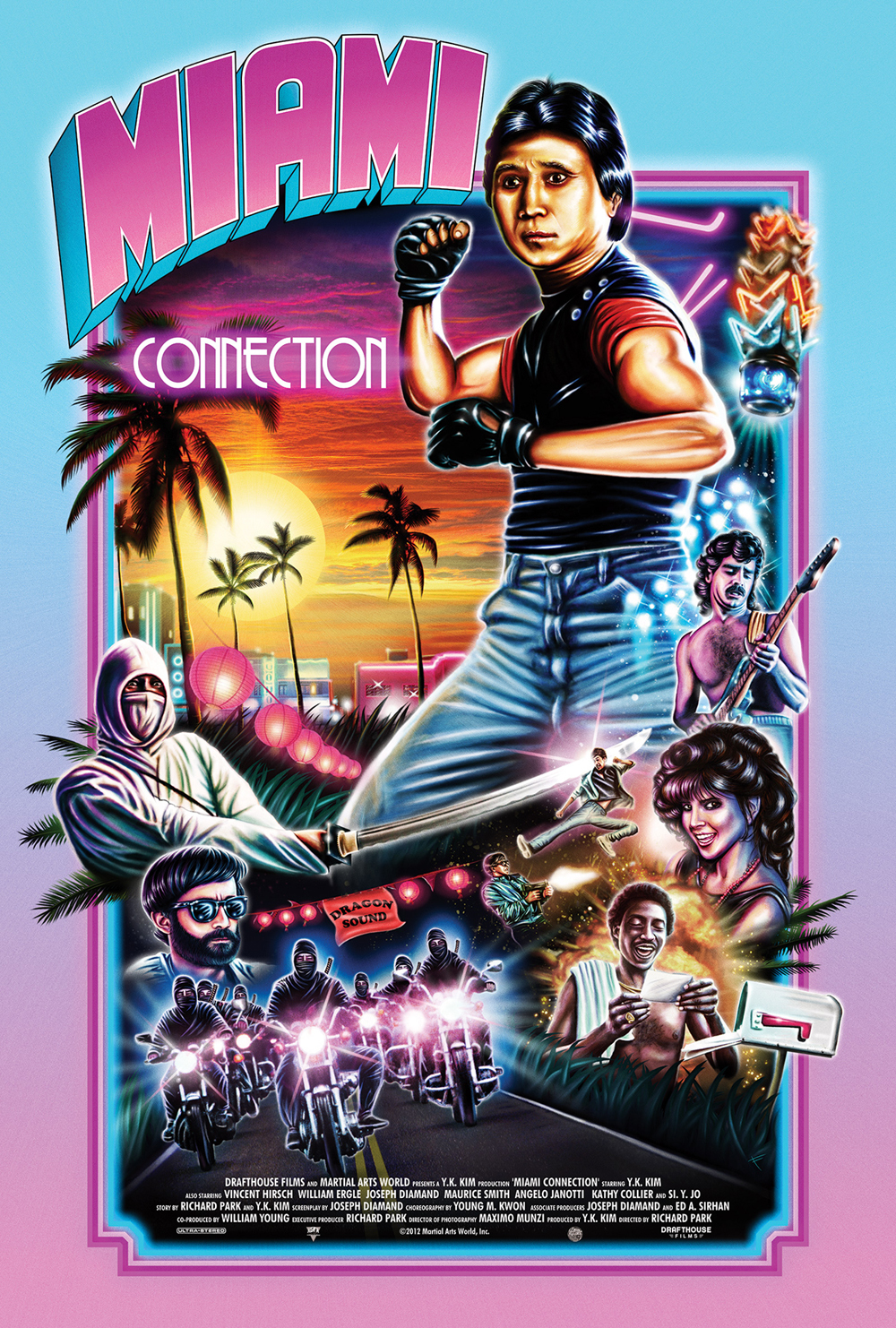 Tagline:Survival the ultimate test… (This is the only one I could find, and it means fuck all in the context of the movie)

Entire Story In Fewer Words Than Are In This Sentence: Karate kids KO cocaine cowboys.

The boys of Dragon Sound, the Taekwondo team / 80s pop band that serves as the central good-guy ensemble, tout the benefits of “sticking together through thick and thin” and brag that they are “on top cause [they] play to win.” They also spend nearly every waking hour together, often shirtless and with the flies of their pants undone, if they are wearing proper pants at all. The near-nudity could be explained by the miserable Florida heat, but why does Mark (Y.K. Kim) hand-feed the others grapes at breakfast like a lover (or, perhaps more accurately, a sadistic dom)?

And then there is the abrupt, mostly shirtless reveal that they all live together, as Jim (Maurice Smith), the effeminate bastard whose search for his father is the source of far more emotional turmoil amongst the group than when they are later forced to kill the brother of one of their girlfriends, announces: “Guys, I’m taking a shower first!” As if to offset the possible homoerotic undertones of this and the subsequent tearful sharing of feelings amongst the boys, this scene is immediately followed by an overcompensating sequence in which Dragon Sound collectively ogle women at the beach and attempt to flirt with lines like: “They don’t make buns like that at the bakery.” After the worst flirtation attempt by Tom (Angelo Janotti) fails, he and Jack (Joseph Diamand) end up frolicking together in the sand for a rather protracted amount of time.

Finally, there is the infamous training scene moment when Mark apparently gets his fist stuck in the open mouth of his sparring partner, which may not actually be homoerotic but it certainly is hilarious.

I was able to count at least 25, but it could be as high as 30 or more. Hard to tell with so many faceless adversaries and the question of who was actually killed versus merely knocked out and never seen again. Probably half of all onscreen deaths are in the very first scene, which shows a promising disregard for the value of human life, but the members of Dragon Sound are more inclined to fight with their hands and feet, leaving opponents bruised and broken, but alive to (poorly) fight again.Â

Balls-deep in the so-bad-it’s-good category. It has a few qualities in common with gold standard-bearer The Room, such as the fact that the dialogue sounds like it was written by a child and the protagonist speaks in a nearly incomprehensible foreign accent. Poorly composed shots, cheap sets and unconvincing editing abound, and the hopelessly 80s aesthetic and soundtrack are a big part of its enduring charm.

However, it really is the quality of the writing and performances that make this turkey soar, as evidenced by some of the “one-liners” below and the almost impossible woodenness and ineptitude with which they are delivered. It’s also pretty funny how everyone in the movie, from boy bands to coke traffickers to music promoters to restaurant owners, seems to practice martial arts in some capacity.

From start to finish, this is a laff riot of barely competent moviemaking, with some of the most absurd heroes, villains, and henchmen in the entire genre, and a hysterical habit of introducing new characters and subplots with a scatterbrained randomness that again recalls (but pre-dates) Tommy Wiseau’s trash masterpiece. Miami Connection has truly earned its place in the pantheon of the endlessly rewatchable godawful.

As mentioned above, this movie has not so much intentionally funny one-liners as incredibly bad dialogue delivered in a way that makes it even less convincing. There is a ton of laughable expository ADR like, “I got a new shipment of coke. I move a lot of coke in Orlando,” but below are a few of the funniest moments of actual dialogue:

“Where’d you find this sonofabitch?”

“He’s in there every night with his damn gang, selling that stupid cocaine.” (This one is delivered with a “gee willikers” sort of cadence reminiscent of Wally Cleaver)

“Ah, we need to get these gangs out of Central Florida anyway.” (A cop who might also fit in well on Leave it to Beaver)

“We must avenge Jeff’s death! They will not escape the Miami ninja!”

The bad guys are involved in the cocaine trade, which is pretty standard for 80s Action, but the main ideological stance of the movie is definitely “against the ninja.” In the opening scene, for example, the real bad guys are not the comparatively innocent, non-ninja coke traffickers, but the evil ninjas who show up to massacre them and steal their supply. The good guys of the band Dragon Sound are introduced with a song that sums up their peacetime values (“Friends for eternity, loyalty, honesty”), but they are not to be pushed around by any damn ninjas. When Yashito (Siyung Jo), leader of the “Miami ninja,” inexplicably orders Jeff (William Ergle) to “get rid of that band so you can control that area,” a blood feud has begun, which is signaled by the following scene, in which Dragon Sound lays out its wartime philosophy: “Taekwondo is our way of life / We must stop the senseless killing / We must end this evil war / We must stop the senseless killing / We’ll even up the score / Against the ninja!”

I guess Yashito is the closest thing to it in this movie that doesn’t really involve the police at all, other than as glorified extras in a single scene illustrating their incompetence (and the movie’s limited budget for functioning patrol vehicles). Jeff also comes off as something of a hateful authority figure as he tries to forbid his sister, Jane (Kathie Collier), from hanging around with John (Vincent Hirsch) and Dragon Sound, but beyond these stretches, Stupid Chief is not really an element in this one.

Pretty ordinary, I’m afraid. Nothing much more novel than decapitation by a sword, but the opening and climactic sequences show a dedication to bloodlust that almost makes up for the fact that no one in the movie, not even actual Taekwondo expert Y.K. Kim, is remotely plausible as a martial arts expert.

Was There an Atomic Blast at the End?

No, just a lot of slashing and screaming in the jungle, with none of the good guys suffering more than a suspense-creating injury, but all of the bad guys being brutally killed after pushing Dragon Sound too far. This bloody climactic battle is closely followed by the painfully obvious and hollow platitude below.Â

“Only through the elimination of violence can we achieve world peace.”