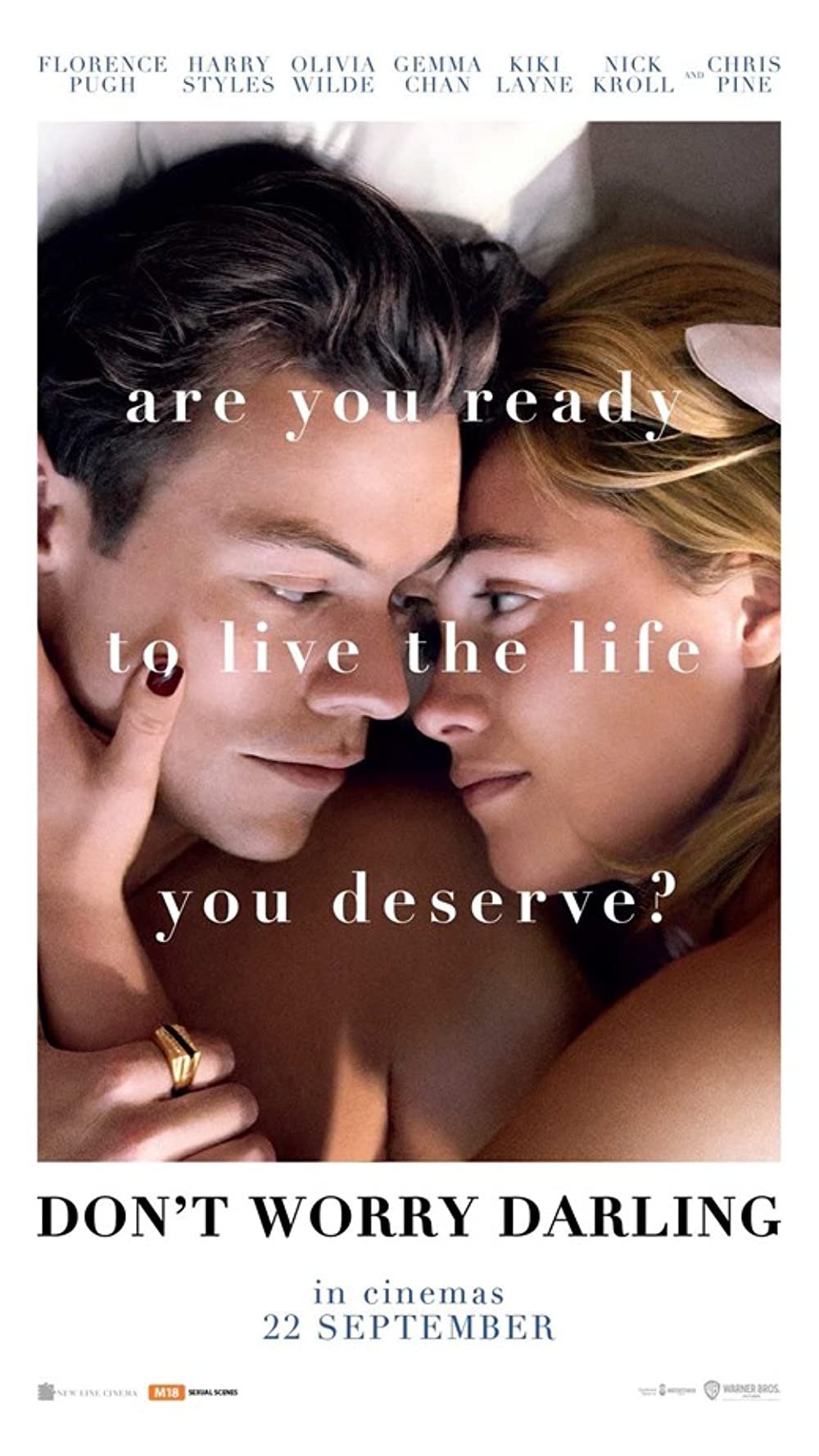 A housewife becomes suspicious of a utopian community experiment

Don’t Worry Darling is exactly the kind of movie that drove me to writing movie reviews. It’s a movie that is decent to watch the first time, but whose story immediately crumbles to dust upon even the slightest bit of scrutiny. It continues to astound and confound me that stories with plot holes you could fly the Death Star through make it through multiple drafts, are filmed, and get through post-production without at least one semi-conscious person making the obvious change that plugs the hole.

Case in point – Signs. Really, at no point during any stage of production did anyone notice that the entire movie revolves around aliens who are lethally allergic to water invading a planet where seventy-one percent of the surface is covered in water, where the atmosphere also contains plenty of water, and those aliens didn’t bother wearing clothes?

Clearly, I’m going to go into detail on Darling‘s plot and its holes, but I’ll get to that a little later. Like I said, it’s a decent watch up until the last ten minutes of the film, when the story reveals its guts to look almost identical to those of Clark Griswold’s Christmas turkey.

Prior to the last ten minutes, the film builds a very intriguing mystery. Alice Chambers (Florence Pugh) and her husband Jack (Harry Styles) live in the perfect version of the idyllic version of 1950s suburban America. And not just the Leave it to Beaver version, but the version where a perfectly dressed and done-up wife opens the door for her husband when he gets home from work, hands him his favorite drink, leads him to the dining room where a freshly prepared, five-course meal sits on the table, then immediately fucks him on said table, meal and fine china be damned. Hehe – Leave it to Beaver, indeed.

Every morning, like every other wife in her cul-de-sac, Alice makes Jack breakfast, prepares his lunch, walks him to his car, kisses him goodbye, and waves, as he and the rest of the husbands drive off to work in a line of color-soaked, 50s-era cars. I agree, it just got weird.

Alice spends the day doing chores that every man of that era expected his wife to do. Clean the house, shop for groceries, gossip with the other ladies, take care of any kids (of which Alice and Jack have none), and repeat the whole dress-drink-dinner-sex thing with a permanent smile. Men are really stupid.

Except, something doesn’t seem quite right to Alice. Perhaps it’s the mundanity or inanity of such a life, but she begins to experience flashes of memories, including a certain song’s melody that she can’t stop humming. One day while riding the town trolley, she sees a plane crash and urges the driver to take her there. Confused and slightly afraid, he refuses to help, so Alice heads out of town on her own, into the California desert, to help any victims. Instead, she stumbles upon the headquarters of the Victory Corporation (the town is also called Victory), then passes out amid hallucinations of eyeballs and synchronized dancers in black and white. I agree, it just got weirder.

From here until the last ten minutes, Alice grows more and more suspicious and paranoid about the situation, including of the town’s founder and spiritual leader, Frank (Chris Pine). Eventually, she begs Jack to escape the town with her and, now, we’re at that ten-minutes-to-go mark.

By this time, the movie has done a good job of building suspense and the audience is definitely on Alice’s side. Everything we’ve seen has drawn us further and further into the mystery and we are all on the edges of our seats in anticipation of the reveal. We’ve also been treated to a stellar performance from Pugh (who absolutely carries this film on her back), exceptional cinematography, and music and sound that escalate the tension, building us toward the answers we are craving. Then, the reveal happens. Even the movie itself seems to know the reveal is bullshit, when after finally giving it to us, it quickly tries to distract us with Alice’s long overdue attempted escape, then cutting to credits before we have time to put our hands up to ask questions. About those questions…

First of all, no, Harry Styles was not good. There were moments of potential, but the vast majority of his performance proved that his reason for being in this film was purely based on putting teenage girls’ butts in seats. And it will probably work, at least enough to make the film break even, if not turn a profit. The advanced screening audience was easily ninety percent girls who are not old enough to vote, most of whom were still whooping at the screen when Style’s name popped up in the end credits. Never mind that he came off like someone who had no idea they were actually in a movie, which only added to how bad he came off in the pre-taped cast interview we were shown prior to the film. When he was asked questions, the look on his face was a mix of confusion and a cry for help, mumbling his way through incoherent sentence fragments until a cast mate or the interviewer bailed him out. I have to believe he’s not allowed to speak at One Direction concerts, just sing.

Unfortunately, Chris Pine wasn’t much better, which was a huge letdown for me. Pine is unconvincing as Frank, lacking all of the charm and charisma that is required of sinister cult-type leaders conning everyone as the town leader and Victory company chairman. Some of this was clearly the fault of the screenplay refusing to use Frank for all but a couple of scenes, but also stems from Olivia Wilde’s direction, or lack thereof. Wilde seemed not to notice Pine delivering a wooden performance or that Frank is a woefully undeveloped character with no motivation. The movie would have been no different had Frank (and Frank’s wife, Shelley, for that matter) been cut out completely and only referred to by the townspeople. And that brings me to the big reveal.

The whole town is nothing but a computer simulation. To be specific, the simulation is specifically for men who want that fantasy version of life that has never, ever existed because the vast majority of women don’t spend every waking moment thinking about how to please men and their dicks. To fulfill the fantasy, Jack and the other men in Victory have drugged and kidnapped their significant others, forcing the women into the simulation without their consent or even their knowledge. Like I said, that in and of itself is not a bad reveal. The problem is that everything we saw in the movie becomes nonsense in that context.

You see, in real life, Alice is a very busy surgeon and Jack is unemployed. Clearly, Jack’s penis can’t handle this situation. After sinking further and further into depression and diving deeper and deeper into the dark holes of the Internet, he stumbles upon Frank’s software and sermons, eventually buying into the bullshit as a legitimate solution and drugging and kidnapping his own wife.

The more you think about it, the more nonsensical it becomes. The women are in their own beds in their own homes, with little gadgets attached to their eye sockets holding their eyelids open while lasers continually scan their eyeballs. The men are using the gadgets as well, but are doing it willingly, so don’t require the drugs. If the women escaping or finding out the truth is such a huge risk, why isn’t there a secret facility where the women are held prisoner, with experts monitoring various feeds and administering the drugs, and smoking rooms for the men to use to congratulate each other’s testicles when they take a break from the simulation? This scenario is even hinted at when Alice is being electroshocked in an attempt to erase and reset her mind, but that means they return her to her apartment despite clearly being a security threat. And that’s just one question. Here are more of the questions that arise about stuff that defies logic after the reveal.

There are so many more questions I have along those lines. The entire idea feels half-baked and, despite being an original screenplay, feels like it was adapted from a novel or an episode of The Twilight Zone, but by someone who didn’t bother to read or see the source material. It’s a movie that feels like at least thirty minutes of vitally important scenes were cut from the film. It’s a movie that could have been so much better had anyone just raised their hand and asked any obvious question about a clearly broken plot.

RATING: Ask for half of your money back, even if you only care that Styles is just a pretty face.