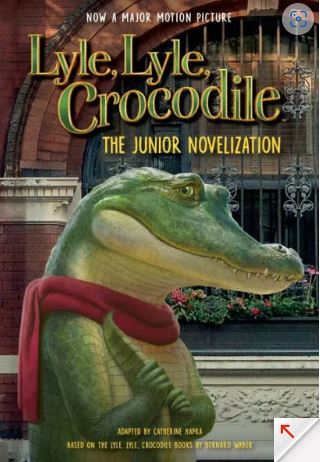 You’re right, no human being would stack books like that

“Lyle, Lyle, Crocodile” – You’re right, no human being would stack books like that.

I didn’t know the book existed either until I Googled it, after my son said the film’s title sounded like a kid’s book. Turns out the book is the second in a series of books featuring Lyle, a friendly crocodile living in New York City. Curiously, the Wikipedia page for the series contains a total of eleven sentences despite the book (and series) supposedly being a best-seller, as well as being previously adapted by HBO (in 1987). Wikipedia calls minimal pages like this a stub, which translates to “we’ve never heard of it either.”

(Side note: For comparison’s sake, the Wikipedia page for the word “the” is far more robust than that of the Lyle series, meaning the word “the” is more interesting to people than an alleged best-selling book series.)

Unfortunately for Sony Pictures, Lyle is likely to remain unknown after the film’s release. Lyle is opening against a David O. Russell film (Amsterdam, starring Christian Bale and Margot Robbie), in early October before kids go on fall break, with the final Halloween (Halloween Ends) movie opening a week later. That’s a tough hill to climb for a film adapting a sixty-year-old picture book that nobody knows and even tougher when that film isn’t good enough to get a word-of-mouth boost.

Lyle begins with a long take of aspiring showman Hector Valenti (Javier Bardem) skillfully weaving his way through people and back rooms until he arrives on the stage of a nationally televised talent show, cutting in front of everyone else patiently waiting in line to repeat his already-rejected magic act. It is a very technically sound scene and establishes Valenti as clever, self-serving, and unwilling to take no for an answer. It is, without a doubt, the best scene in the film.

After being thrown out of the theater, Valenti wanders into an exotic pet shop and discovers a tiny singing crocodile (voiced by Shawn Mendes) who Valenti names Lyle. Thinking Lyle is his ticket to fame and fortune, Valenti purchases Lyle, takes Lyle home, and immediately starts working on a duet act, even using the deed to his Brownstone as collateral for a loan to fund the act at a nearby theater. The two hit it off and all the stars seem to be aligned for their debut to be a smashing success.

Finally, the curtain raises on the show, Valenti bursts into their opening number, and Lyle…gets stage fright, barely utters a peep, and the two are laughed off the stage. In a rage, Valenti drags Lyle to a nearby tailor’s shop where Lyle is turned into a pile of belts and boots and sold to the theater owner to pay back Valenti’s loan. The end.

Just kidding. This is a children’s book, remember? What actually happens is Valenti abandons Lyle, leaving Lyle – the equivalent of an adolescent child in this story – alone in the attic of the Brownstone to fend for himself. No, seriously…that really happens. What do you think about THAT, kids?!

The film then jumps ahead eighteen months, where we meet the Primm family – dad Joseph (Scoot McNairy), stepmom Katie (Constance Wu), and young son Josh (Winslow Fegley) – moving into the Brownstone. Each of the Primms has a problem they must overcome, which can only be done by meeting their worst nightmare – an anthropomorphic crocodile living in the attic.

Josh is terrified of everyone and everything in the city, but one night of dumpster diving with Lyle turns Josh into Johnny Manhattan. Joseph’s math students at his new school bully him, but one night of wrestling with Lyle reminds Joseph that whistles are really loud and blowing a whistle at the students instantly gets them to behave. Katie has forgotten the joys of cooking food that isn’t one hundred percent pure health-food, but one afternoon of baking a cake with Lyle reminds her that crocodiles are excellent chefs. Problems all solved. The end.

Just kidding. Despite this film ostensibly being based on just the first two books of the series, it plays out like it’s based on all of the books. After the Primms conquer their issues, the film pivots to another subplot involving their jerk neighbor in the basement, Mr. Grumps (Brett Gelman). Mr. Grumps is developed exactly as deep as his name, looking for any reason to have the Primms evicted. Meanwhile, Valenti reenters the film, inviting himself to stay with the Primms and reheating his own subplot of getting rich off Lyle (again). Valenti appears not to have changed even the tiniest bit while off-screen for eighteen months, so not even the four-year-olds in the audience are surprised to find him trying to coerce Lyle back onto the stage.

Due to the volume of subplots incorporated into the film, the rest of the film suffers from underdevelopment. There is no main plot to speak of, the characters are reduced to a name and whatever their problem is, and even the subplots themselves are little more than anecdotes. In turn, that leads to performances that are forgettable at best, as well as a terrible singing performance from whomever Wu was lip-syncing to during the cake-baking scene and dancing from Bardem that is more disturbing than anything he did in No Country for Old Men.

If Lyle has one saving grace, it’s that adults aren’t the target audience, kids are. When my ten-year-old son was asked what he thought about it, he gave it an eight out of ten. His reasons were because he liked the beat-boxing rattlesnake and laughed at the pooping cat. Nor did it bother him that Lyle understood English and could sing, yet also couldn’t speak. He even gleaned a theme from this mess of a movie – change is hard. And isn’t that kind of the point of children’s books and movies? To teach kids a moral lesson? Even if they have to surround it with crocodile farts? Lyle may be the equivalent of someone pushing over a loaded bookshelf, but if it makes my son smile, I’ll take what I can get.

Rating: Ask for half your money back and give it to your kid.