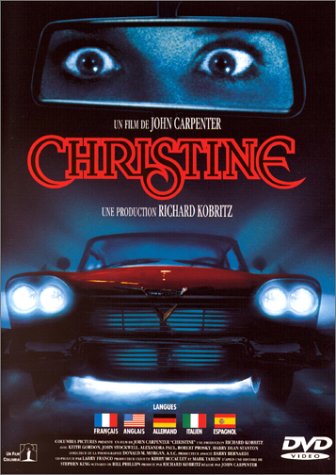 I have three gods in my pantheon: Jim, Jimi and Herman. (That is, for those of you that are not American: Jim Morrison, Jimi Hendrix and Herman Brood.) All pantheons all need a degree of lesser gods, so there are: Stephen King, Freddy Mercury, Bobby Fischer, Ronnie O’Sullivan, Elon Musk [EDITOR’S NOTE: What is wrong with you?] and, of course, the all-powerful, forever very holy Sinterklaas. (Look him up. He is Santa Claus, the original.)

One of these, my dear and very revered Mr. King, once wrote a novel called Christine. It was about a possessed car, a 1958 Plymouth Fury, and a total loser named Arnie Cunningham that found her. As a total wreck, he bought her, and then fixed her up, and then got totally possessed by her, you know what I mean? No? Anyway, sometime after that there was another genius called John Carpenter, who turned this awesome story into a more awesome movie, and that is what I’m here to write about.

I’m very drunk right now, so who knows? Maybe we’re gonna talk about how the world is secretly ruled by evil lizards, as one of our legally represented members of parliament seems to believe, but hey, who cares, man… We’re all circling the drain here, so let’s get on with it, shall we?

So, Christine, the movie is here. Like I said, Mr. King is a god and Mr. Carpenter is a genius, so combine those two, and you get this: a splendid movie. Just go see it, and if you do not agree with me, I will let Christine know where you live.

Vroom! I know all the scenes of this movie. Every one of them. Back-to-back, I know them. Here’s the red Christine, the devil herself, coming off the assembly-line, and you just know she’s about to kill someone. Because she’s just evil incarnate, that’s why! That black man just sits there, on Christine’s front seat, smoking his cigar and listening to some good old rock and roll, and then… he is… just dead.

Arnie is just this total loser.  He’s a nerd, a sucker, a meat bag, someone that deserves a punch in the face.  Alas, he finds this car, Christine. She’s like, a total wreck, but he buys her anyway, with dreams of fixing her up, like he’s imagining fixing up his own fucked up mind soul and relationships. Somehow, we know that he’s never going to get there. Therefore, with his twisted logic, he just imagines murdering his girl brutally, and blaming his possessed car…

I also loved this awesome old cop who suspects something but just can’t get to the point because Stephen King just likes to kill all those who have tortured him in the past. Over and over again, we as sour and sore losers, are ready to read about it. What is wrong with us?

Anyway, the movie is a delicious guilty pleasure for me. Go see it