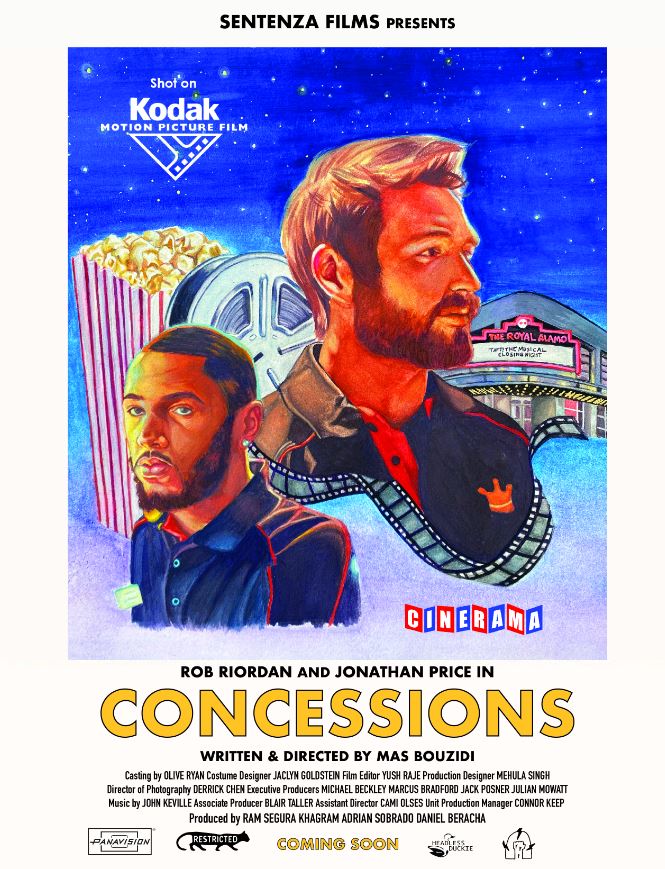 A short film about the reflections on a closing theater

It is not news to anyone that brick and mortar everything has been on the ropes for years. The covid pandemic was just another gut punch to retail and nothing was hit much harder than the cinema movie houses. Multi-screened theaters are going the way of the drive-in movie and the shopping mall. The competition is crushing with streaming services popping up like the inevitable movie popcorn with a reluctant labor pool to boot.

Concessions is a 24-minute short by Mas Bouzidi where two concessions workers, Hunter (Rob Riordan) and Lorenzo (Jonathan Price) are sharing lamentations about their theater’s last day before shuttering forever. Hunter and Lorenzo’s discussion of movies turns almost confrontational when Lorenzo mentions Forrest Gump. Hunter immediately goes off the rails with his loathing for the Gump movie and almost everything else. He is the consummate Negative Nancy, finding fault in everything, and for all the wrong reasons.

From racism to antisemitism, Hunter never found a slippery slope that he did not love to go down. He found fault with his job, the cinema, movies, his life, everything, and mostly because of his own soured attitude. I mean, he even finds a Jewish hating boogie man in Star Wars. Don’t get me wrong, Hunter is not evil or a villain, he is just misguided and unhinged and the long-suffering Lorenzo has to show the patience of Job to listen to his often-hilarious rants.

This short film is very well done. I didn’t detect a single moment or line wasted. I won’t reveal any more spoilers, but the payoff with the movie conclusion is quite satisfying. The acting and camera work was exemplary for an independent movie maker. You can watch this neat little short on YouTube and it is well worth the time spent. Great job, Mas!