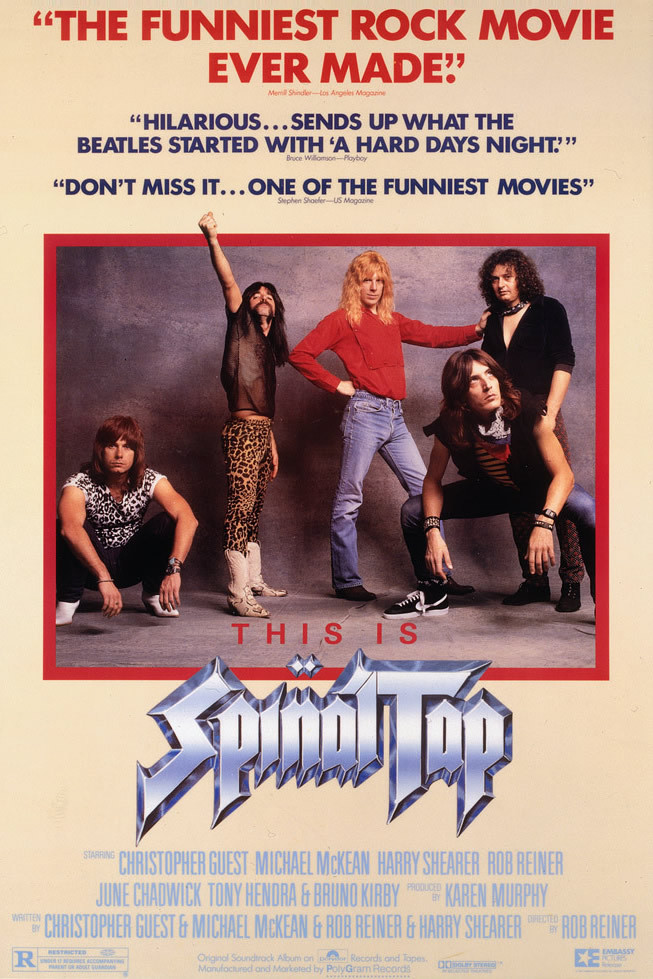 This Is Spinal Tap

A fine line between clever and stupid

I often argue movies are made-up nonsense that have no effect on me. Like a lot of things I say, I’m probably on dodgy ground. Consider Spinal Tap. Good grief, the first watch was a minor revelation. Up until its chastening, palate-cleansing introduction in my mid-twenties, heavy metal could do little wrong. That’s why I happily owned albums such as Krokus’ Metal Rendez-vous, Whitesnake’s Slide It In, Def Leppard’s Hysteria and Saxon’s Wheels of Steel. I even planned to do some headbanging at the UK’s annual Monsters of Rock festival where I might be blessed to catch the unquestionably mighty sounds of Y&T or Dio.

Well, midway through my first viewing of Spinal Tap, that vague desire to make a Castle Donington pilgrimage was stone dead. Talk about the clouds of ignorance parting. It was so on the money I could only shake my head as I realized the average heavy metal band consisted of ridiculously dressed, overgrown adolescents churning out guff about their sexual prowess, rebellious nature, reverence for the rock lifestyle, and an undying love of motorbikes, goblins and dragons. All while waggling their tongues and thrusting their hips. I switched Spinal Tap off, unable to do much more than stagger across to my album collection and stare half-dazed at it. How was it possible to believe I’d developed a modicum of taste when I owned a Twisted Sister single?

Nonetheless, Spinal Tap didn’t make me chuck the baby out with the bathwater. I still retain enormous fondness for the creative efforts of some of those longhaired doofuses. It just made me a lot more discerning. In a way, I liken heavy metal to my love of horror. Ninety-five per cent is shit but when a heavy metal song or a horror flick like The Thing work, they reach a level no other style can. Sabbath’s Paranoid still sounds good, as does Purple’s Speed King, Motorhead’s Ace of Spades and ACDC’s Sin City, but such reliable reassurances don’t last too long coz it sure ain’t hard to tell that most metal gods are adrift on a sea of liquid cheese.

To try to understand how immune they can be to their special brand of naffness, I recommend spending a few minutes with Judas Priest circa 1980. Now Spinal Tap wasn’t quite powerful enough to stifle my appreciation of Priest’s 70s stuff, but it did make me grasp that their latter-day credibility had tumbled down a steep hill. Take their breakthrough album British Steel and its lead single, Breaking the Law. Its accompanying video shows the band robbing a bank by bursting in and letting fly with their music, the implication being that their ear-shredding guitar solos are akin to bullets from a gun. They then steal their own framed gold record from the vault.

And no, I’m not making that up. To this day I’m puzzled why the band simply didn’t ask the bank manager for their gold record. After all, it is theirs.

Breaking the Law is a fantastic slice of cheese because it’s meant to be funny yet it falls so flat on its face that it becomes funny because it’s so unfunny. Does that even make sense? But that’s what trying to break down heavy metal’s appeal is like. So much of it is ridiculous yet wonderful. Breaking the Law remains a perfect encapsulation of its gloriously absurd world. Judas Priest, by the way, learned nothing from Spinal Tap, later releasing a lumbering, thirteen-minute epic about the Loch Ness Monster.

And so, to Rob Reiner’s Spinal Tap, a pitch-perfect mockumentary that gets rewatched every few years, even if it does stir up deep-rooted memories of shame. The director plays an avowed fan following an English five-piece band called Spinal Tap as they tour North America in 1982 to promote their latest album, Smell the Glove. Straightaway the cliches are captured, such as the too tight trousers, the onstage acrobatics and mishaps, the near-orgasmic self-expression, the demonic imagery, and the way guitars are aggressively wielded like huge penis-guns.

Childhood mates David St. Hubbins and Nigel Tufnell (Michael McKean and Christopher Guest) form Spinal Tap’s heart, having played together for seventeen years. Both are lovable morons that believe they’re making great art, even though their songs have titles like Big Bottom, Sex Farm and Lick My Love Pump. Indeed, the band’s failure to grasp their outdated attitude to the ladies is a recurring source of humor. Witness Nigel’s response to accusations that the band’s latest cover (which features a naked woman on all fours in a dog collar) is sexist. “What’s wrong with being sexy?” he innocently asks. This is where Spinal Tap scores big in that there’s nothing mean-spirited about the group in either their attitudes or behavior. They’re simply oblivious to their idiocy, enabling the viewer to smile along when they sing about women being sunk by pink torpedoes.

Indeed, criticism often bounces off, such as one newspaper writer labelling Smell the Glove as a ‘colossal waste of time’ that shows the band is ‘treading water in a sea of retarded sexuality and bad poetry.’ Nigel can only shrug. “That’s nitpicking, isn’t it?”

But the less than enthusiastic reception of the new LP proves a telling omen. Before long, offended shop owners are refusing to stock it while gigs get cancelled. Those that go ahead are not exactly overflowing with fans, leaving the band’s manager to deny any suggestion the band’s popularity is fading by instead insisting their appeal has become ‘more selective’.

Spinal Tap’s understated, superbly edited eighty minutes serve as a microcosm for the chequered history of many a heavy metal colossus. Here we get fragile egos, jealous dismissals of other bands, flirtations with Celtic mythology, songs about God and the devil, projects that never see the light of day (such as a Jack the Ripper musical), delusions of grandeur and artistic integrity, a procession of unfortunate drummers, the ups and downs of life on the road, a resented Yoko Ono-like girlfriend imposing her mumbo-jumbo on whoever will listen, the weird isolated chart success in Japan and, of course, the bust-ups, walkouts and reunions. None of the band acknowledges their advancing age or the draining of whatever little creative juice they initially possessed. Throughout it all, myriad bit players, ranging from disrespected limo drivers to airhead fans trying to explain metal’s appeal, fit in seamlessly. There’s not a bum note anywhere and I’d argue that the Stonehenge segment is among the funniest moments in 80s cinema. Some of it even proved prescient, such as Metallica releasing a black album and later playing with a symphonic orchestra.

By Spinal Tap’s closing stages nothing has been learned and nothing has changed. Thank God. Reiner never judges or points a finger, obviously preferring gentle ridicule that can’t quite manage to disguise his deep affection for heavy metal’s inherent silliness. He ends up with a mockumentary that pulls off the trick of being patently absurd and yet somehow within the realms of plausibility.

To put it another way, he walks that fine line between clever and stupid.