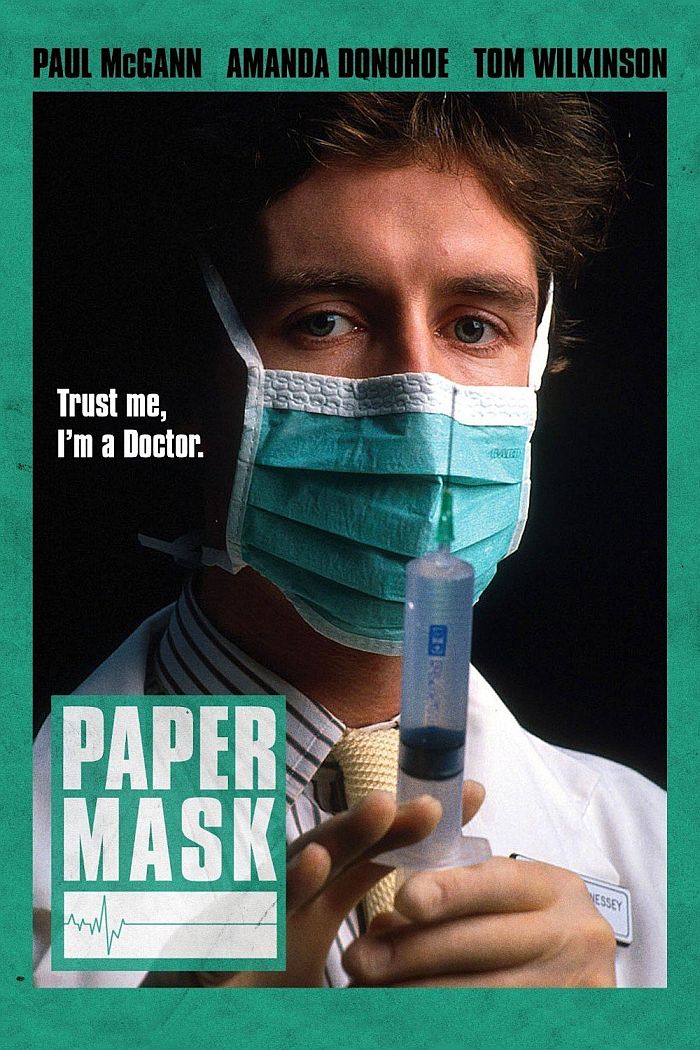 Matthew Harris (McGann) is a frustrated, doctor-envying porter at a London hospital who contracts the infection known as ambition.

When I think back over my ‘career’ as a teacher and journo, hardly anybody asked to see my qualifications or took the trouble to check my references. I certainly landed my first job as a trainee reporter without the slightest sniff around. I also expected to be given a form of ID to help reassure Joe Public whenever I turned up on their doorsteps, but that never happened in ten years. People just took my word that I was who I said I was, obviously swayed by my boyish charm. It made me realize how easy it would be to make shit up, especially if you were the bold type.

Paper Mask takes this concept and runs a few steps further with it, as well as reminding us that doctors are mostly arrogant fuckers.

The story: To be thus is nothing, but to be safely thus. Matthew Harris (McGann) is a frustrated, doctor-envying porter at a London hospital who contracts the infection known as ambition. When a doctor colleague gets killed in a traffic accident, he decides to assume his identity so he can attend the dead man’s interview for a job in a different city’s A&E department…

Why it works: Bloody hell, this is one unsettling flick. On his first day as a ‘doctor’ Harris is so inept he struggles to put on a rubber glove while inflicting so much pain on a bloke with a gashed thumb that the patient runs away. Harris is a lucky sod, though, and a smitten nurse (Donohoe) starts showing him the ropes. Before long (and with some intensive after-hours study) he’s doing no worse than the other sawbones. Paper Mask pulls off a neat trick: we know Harris is a fink yet we half-want the bullshitting weasel to succeed.

Apart from the clumsy use of The Great Pretender on the soundtrack, the first eighty minutes are superb. Writer (and former doctor) John Collee obviously knows his stuff, enabling the film to ooze with telling details such as the importance of the old boy network when it comes to getting (and staying) ahead. He’s also happy to show how the average doctor thinks the sun shines out of his or her stethoscope. There are some welcome touches of humor while the dialogue often veers between economical and punchy. Performances are also nicely judged. McGann, whom you might recall as Withnail’s long suffering sidekick, is quietly chilling. Look at the way he doesn’t hesitate while flushing an engraved watch from his parents down the bog to help obliterate his identity. He’s the sort of guy who sees a tragic accident as an opportunity.

Donohoe makes a lovely nurse, not quite in the scrumptious class of American Werewolf’s Jenny Agutter, but still an effective foil for our unscrupulous, arse-covering anti-hero.

Best of all is Paper Mask’s queasy nature. Or as one slightly sozzled doctor admits at a party: “I’ve been qualified for five years now, and I know one, maybe two people I’ve killed and that’s a bloody good batting average. There’s no one in this room who hasn’t made a mistake. If the punters don’t accept that, frankly, who gives a shit?” Even a fraud like Harris can see the truth. Listen to him dismissing the standard seven years of training: “It’s bullshit. They’re wanking around in university for five years, they put ’em straight on the ward, they learn by trial and error.”

The message is clear, folks. Do yer best to stay healthy.

The things against it: Generally speaking, for a movie to be great, it has to be great all the way through. Off the top of my head the only exception I can think of is Psycho, which makes the thudding mistake of wheeling on a shrink at the death to explain at length Norman Bates’ deviant behavior. Paper Mask has a great first hour and twenty, perfectly illustrating how far a narcissistic personality can take a man, but then lurches into implausibility, coincidence and contrivance.

Verdict: In many ways Paper Mask is a dark forerunner for the much better-known DiCaprio conman vehicle, Catch Me If You Can. It explores the nature of identity, ambition, illusion, self-delusion, fakery, guilt and reputation, as well as the dangers of a little knowledge and misplaced love. It’s ace at demonstrating that an appetite for dishonesty can provide the bedrock for much more cancerous behavior. Shame about its final descent into melodrama.