OUT FOR A KILL: 90s INACTION 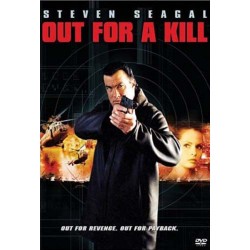 Is it even possible to articulate the premise?


Unfortunately, it is. Seagal is “the most distinguished academic”
at Yale, because it would be a bit of a stretch for him to be the most
distinguished academic at Harvard. He’s so smart that he becomes a
patsy for a Chinese drug ring who try to smuggle drugs by hiding them
inside of the artifacts he is collecting for his research. The plan is
to slip them into some sculptures when he isn’t looking, even though
doing so entails breaking the customs seal. Why would the film actually
go out of it’s way to show us how the smugglers must break the customs
seal to get the drugs in the sculptures? Running time? “We need 4 more
minutes. Stop me if this seems like a bad idea, but let’s just insert a
couple of scenes that have no other purpose than creating a plot hole.”
Anyway, the Chinese try to kill SS and fail when he gets back to the
US, so they offer a peace proposal. It is simply, “if you leave us
alone, we will leave you alone.” Seagal accepts and is warned that his
wife will be murdered if he violates the terms of the agreement. This
makes him angry, so he immediately violates the terms of the agreement
and his wife is murdered. It’s hard not to side with the Chinese on
this one. It’s not often that a massive organized crime family holds
out the olive branch like that, and once Seagal slapped it out of their
hands, they had no choice but to follow through on their threats.
Anyway, Seagal spends the rest of the film hunting down and killing
Chinese crime bosses in impossibly boring fashion.

Evidence That The Script Was Written With The Aid of Fortune Cookies:


While the script is awful in every respect, one of the more
persistent annoyances is the dialog of the Chinese bosses, who sit
around a meeting table discussing Seagal and keep calling him “gweilo.”
‘Gweilo’ is generally a pejorative term for foreigners, especially
whites, which is fine and dandy like sour candy. The problem is that
I’ve never seen a word used as such a crutch, in nearly every sentence
and to the exclusion of other insults, nouns or pronouns. They
seriously will not refer to Seagal by any other word. Sample dialog:

Boss A: This gweilo professor is becoming a problem. No longer do
we have among us Mr. Lu of New York and Mr. Ping of Los Angeles

Boss B: Yes, the gweilo is causing trouble in Chinatown.

Boss A: Have we found out more about this gweilo?

A few meetings later and an hour further into the film, when Seagal
has killed more than half of the men who once sat around the table, the
scene begins with the exact same line:

Boss A: This gweilo professor is becoming a problem.

Another recurring embarrassment is the propensity of the characters
to speak in, what I can only hope are inauthentic Chinese proverbs.

Seagal confronts one of the bosses and asks where he can find the man who killed his wife. The response?

Boss: Distant waters cannot quench your thirst. Better to light a candle for the curse of darkness.

Seagal: Where is Sai Lo?

This leads to one of the film’s few satisfying moments when Seagal throws the man out a window.


The makers of this film decided to go in the direction of
attempting overly stylized, trendy garbage. They failed to make
garbage. There are elements of garbage action, like when things slow
down and we see bullets flying in the air. Or how every thing
deliberately looks artificial. There’s also a soundtrack comprised of
musicians failing to make trendy garbage, some trendy faux lesbos and
so forth. Seagal is the worst actor imaginable to cast in such a film
because he thrives on realism. It’s like asking Millet to paint a mural
at Disneyland. The result is a boring mess of pointlessly stylized, and
therefore hallow action centered around a deadpan star.

Out for revenge. Out for payback.


That’s a guess, as the opening scene is a nightclub massacre and an
abomination of editing. I know at least some of the same killings were
shown twice in the scene, and I think some were shown three times.
Really, as far as I could tell, nobody died at all because before the
editor dropped the film into a blender, it was a scene in which the
social mores of wealthy society were called into question at tea party.
Whatever was supposed to have been depicted, I just guessed that 20
people died.


Chinese prison isn’t that bad.  It looks far more pleasant than, say, camping.  I’m assuming, of course, that they don’t show Out For a Kill on movie night.