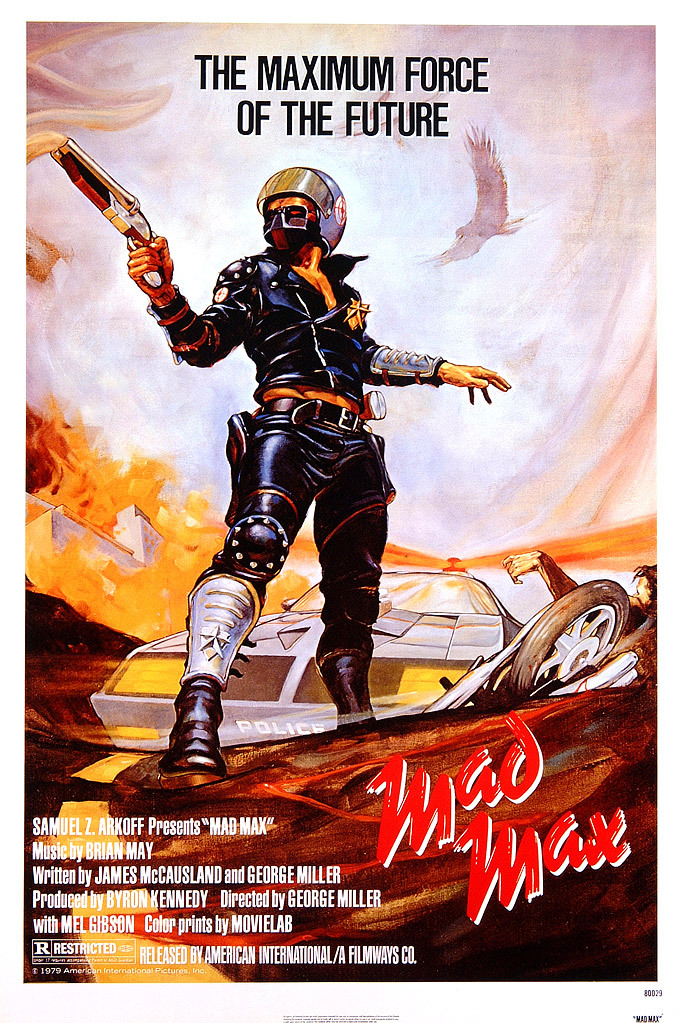 In Australia’s near future, society has broken down and violent outlaw biker gangs rule the open road

The modern movie obsession with car chases probably began with 1968’s fairly good Bullitt, a trend cemented by the Oscar-winning French Connection three years later. Suddenly road warriors with exasperated cops in hot pursuit were all over the silver screen, as exemplified by a big hit like Dirty Mary Crazy Larry, a mediocre crime pic like The Seven-Ups, and the cult favorites Vanishing Point and Two-Lane Blacktop. The 1972 goofy blaxploitation oddity The Thing with Two Heads even managed a momentum-interrupting twenty-minute car chase only to be outdone by Gone in 60 Seconds two years later in which an exhausting forty minutes was given over to such carbon monoxide-pumping nonsense.

As you can probably tell, I’m not into automobiles. I’ve always hated having to deal with slimy second-hand car salesmen trying to blind me with science, grease monkeys charging for non-existent or plain unnecessary work, ever-increasing parking fees, tailgating twats, and girls who refuse to get into the back seat. I’ve never spent one Sunday tinkering with an engine or lovingly waxing a bonnet. Cars are just boxes that get me from A to B rather than metallic gods to be worshiped.

Nevertheless, I know there are plenty of guys who think such indifference marks me out as a bit of a wussy. My next-door neighbor for one. He’s got some sort of V8 beast that makes me sit bolt upright in bed whenever he fires the monstrous thing up at night. He once started reeling off some performance stats but my semi-glazed eyes caused him to tail off. Another time I was a passenger and he went so fast around a corner that the tires squealed. He gave me a knowing glance and said: “You hear that?” Such blokes appear convinced there’s a link between manliness and being a hotshot behind the wheel.

Well, the movies definitely do their best to convince us, and I am partial to Ryan O’Neal’s sophisticated persona in Walter Hill’s ultra-cool The Driver. Just watch the scene in which a bunch of bank robbers demand their prospective getaway driver demonstrate his skills in the confines of an underground car park. O’Neal proceeds to drive like a controlled maniac and demolish their garish yellow Merc against concrete pillars and walls as they scream like terrified children in the back seat. My God, O’Neal rules that pic.

Mad Max, on the other hand, presents most of its wheelmen as feral nutters. They’re not cool at all and often die horribly in pileups. This doesn’t stop petrol heads from loving Mad Max. It fetishizes cars and the whole need for speed to an extraordinary degree. Indeed, I imagine it serves as foreplay for some guys. You know, the kind who like to sneak into the garage (perhaps wearing nothing but a pair of black leather driving gloves) and, in an act of communion, slip their penis into their beloved mistress’ exhaust pipe.

The story: In Australia’s near future, society has broken down and violent outlaw biker gangs rule the open road. Men by the name of Fifi try to stop them.

Why it works: The stunts. You get the sense the stuntmen are risking life and limb for our entertainment which, of course, is exactly how it should be. And so it’s a cavalcade of motorcyclists skidding across the bitumen, cars plowing through caravans and wrecked vans spinning uncontrollably, all set to the revved-up soundtrack of protesting rubber and exploding fuel tanks. Miller’s debut flick has a real kinetic feel with the opening ten-minute pursuit of a barefoot, mad-as-fuck ‘fuel injected suicide machine’ nicely setting the tone, but the vehicular carnage never grows overdone like The Blues Brothers.

But why has law and order gone to shit? Miller provides no clue, although it’s probably got something to do with Trump. It’s also up to the viewer to work out why this societal breakdown has resulted in men driving like lunatics every day of their stunted lives, as typified by our main bad guy, the charmingly named Toecutter (Keays-Byrne). He has a flair for the theatrical, but at least his motorcycle gang behave a lot more horribly than Marlon Brando’s timid bunch in The Wild One. If I’m not mistaken, they not only do wheelies down the main street but rape both males and females.

An impossibly handsome (and imminent Hollywood star) Gibson in only his second full outing holds the center reasonably well, even if he’s saddled with a fluffy-haired, saxophone-playing missus and a podgy kid called Sprog. Thank God he avoids a Lethal Weapon-style mullet.

What works against it: Like Romper Stomper and Debbie Does Dallas, Mad Max put its best foot forward by having a great title. It’s a misnomer, though. Max isn’t mad in the sense of being insane while his righteous anger only erupts in the last quarter of an hour. Compare that to something like Death Wish II (in which Bronson’s thirsting for blood after about twenty minutes) and I can’t think of such a well-known revenger that leaves getting down to its bloody meat and squashed potatoes so late. For the most part, Max is more scared than mad. Its lack of imaginative kills doesn’t help, either.

There are also some implausibilities, such as Max bumping into Toecutter’s gang while on holiday and then making the fateful decision to leave his family unguarded. A loving hubby wouldn’t do this, let alone a battle-hardened cop that knows he’s on the firing line. In fact, given that the Outback isn’t exactly small, people bump into and locate one another rather too easily.

Mention must also go to Max’s boss, Fred ‘Fifi’ Macaffee (Ward). I don’t know what to make of this guy. Big, bald and moustachioed, he appears terrified of his ‘top pursuit man’ Max quitting. There’s one scene in which he’s bare-chested in leather trousers and a necktie while tending his houseplants, fussing over a caged bird and begging Max not to leave. Still, what can you expect from a bloke called Fifi?

Verdict: Mad Max has to be seen for its ongoing influence on dystopian, road and Aussie flicks alone. There were post-apocalyptic movies before this one but none caught the imagination so squarely with its bleak depiction of ‘nomad trash’, underfunded cops at breaking point, and its hard-on for breakneck speed and vehicular destruction. Miller deserves enormous credit for his guerrilla filmmaking techniques that birthed an unpretentious, box-office monster on a shoestring. Saying that, Mad Max slightly underwhelms and never quite hits top gear, probably because it leaves its revenge angle far too late. Miller built on its straightforward blueprint in the sequel, though, and fulfilled a much richer vision.