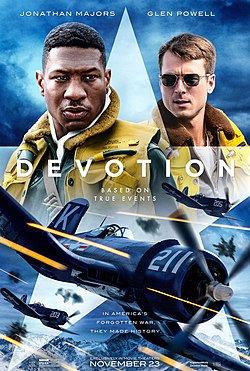 Every year there seem to be a pair of movies, sometimes even multiple pairs, that are doppelgangers of each other. Deep Impact and Armageddon. The Prestige and The Illusionist. Or my personal favorite, Turner and Hooch and K-9. Come on – two buddy cop movies where one buddy licks its own butt? How can you not smile and shake your head in Hollywood? This year, we get dual fighter pilot movies in Top Gun: Maverick and, now, Devotion. As an added bonus, both movies feature Glen Powell as one of the pilots. You’re shaking your head again, aren’t you?

In Devotion, Powell plays Lt. Tom Hudner, a Navy pilot assigned to the VF-32 squadron in 1949. Upon arrival at his new location, he meets Ensign Jesse Brown (Jonathan Majors). Brown is known to history as the first black naval aviator, having completed final qualifications in 1948 and earning his wings. This is a big deal within the Navy and the nation, but Hudner does not seem phased by it. That’s not to say Hudner is dismissing the significance. Rather, he accepts that Jesse is simply another pilot. He and Jesse are assigned as each other’s wingmen and the two men begin a relationship, each sizing the other up.

Based out of Quonset, Rhode Island, the squadron is also assigned to the aircraft carrier U.S.S. Leyte. The squadron spends their time conducting training exercises and it is here where we meet Jesse’s wife Daisy (Christina Jackson) and his very young daughter Pam. We also met the rest of the squadron (four guys) and the squadron leader, Lt. Commander Dick Cevoli (Thomas Sedowski). Much of this first act is used to develop Jesse as a respected pilot and dedicated family man, putting up with a less-than-expected amount of overt racism. Meanwhile, Hudner is determined to prove to Jesse that he is trustworthy and every bit as good a pilot as Jesse. It’s a solid start to the film, but I couldn’t help but feel it was a little underwhelming. Then, the Russians pop off their very own nuke.

Obviously, the United States military is very concerned by this event, dispatching the Leyte to the Mediterranean Sea to project power. This middle act exists to erase any lingering concerns we might have about the relationship between Tom and Jesse. It’s here where we discover the extent of the racism among the ship’s crew, how the squadron reacts to it – especially, Hudner and Cevoli – and even how the French react to Jesse’s presence. It’s important for us to understand these feelings and relationships, because they are vital to the audience’s emotional investment in the climax of the final act.

Through all of this, that lingering feeling stayed with me that the film was coming up a little short on the emotional scale. I can’t quite put my finger on what it was, but if I had to describe my feeling in one word, I’d say it was “quiet.” It’s probably a combination of the mild musical score and that the flying scenes in the first two acts are ho-hum. So, imagine my surprise at how strongly I reacted to the climax, when I had hardly any reaction prior to that point. Either I picked up on something without realizing what it was or I’m getting soft in my middle age.

While I enjoyed the third act quite a bit, my favorite part of the film was Commander Cevoli. Most commanders in war films are loud, abrasive blowhards trying to prove to everybody how tough they are. These guys are followed by their soldiers because the soldiers are ordered to. Conversely, Cevoli is reserved and even-tempered. He commands respect by leading his men through example, being plain-spoken, and always giving them the unvarnished truth. He neither coddles nor yells, but commands the kind of respect from his men that only comes from not blowing smoke up their ass. Think of most little league coaches, then turn them inside out.

As the other fighter pilot movie of 2022, Devotion isn’t going to come anywhere close to Maverick‘s box office, though it shines in places where Maverick falls short. Most notably, Devotion has better acting, which includes Powell. It helps that Hudner isn’t the blank canvas that is Powell’s Hangman in Maverick, giving Powell a chance to do more than smirk. But Majors is the real gem, throwing everything he has into his portrayal of Jesse. His facial expressions alone are enough for three dimensions worth of character and probably the thing that set me up for my response to the climax. I still think Devotion could have done a little more to really sell us on the emotions. At the very least, they confirmed that Powell could pull off a Navy pilot in any decade.

Rating: Ask for a dollar back and take your dog for a walk.