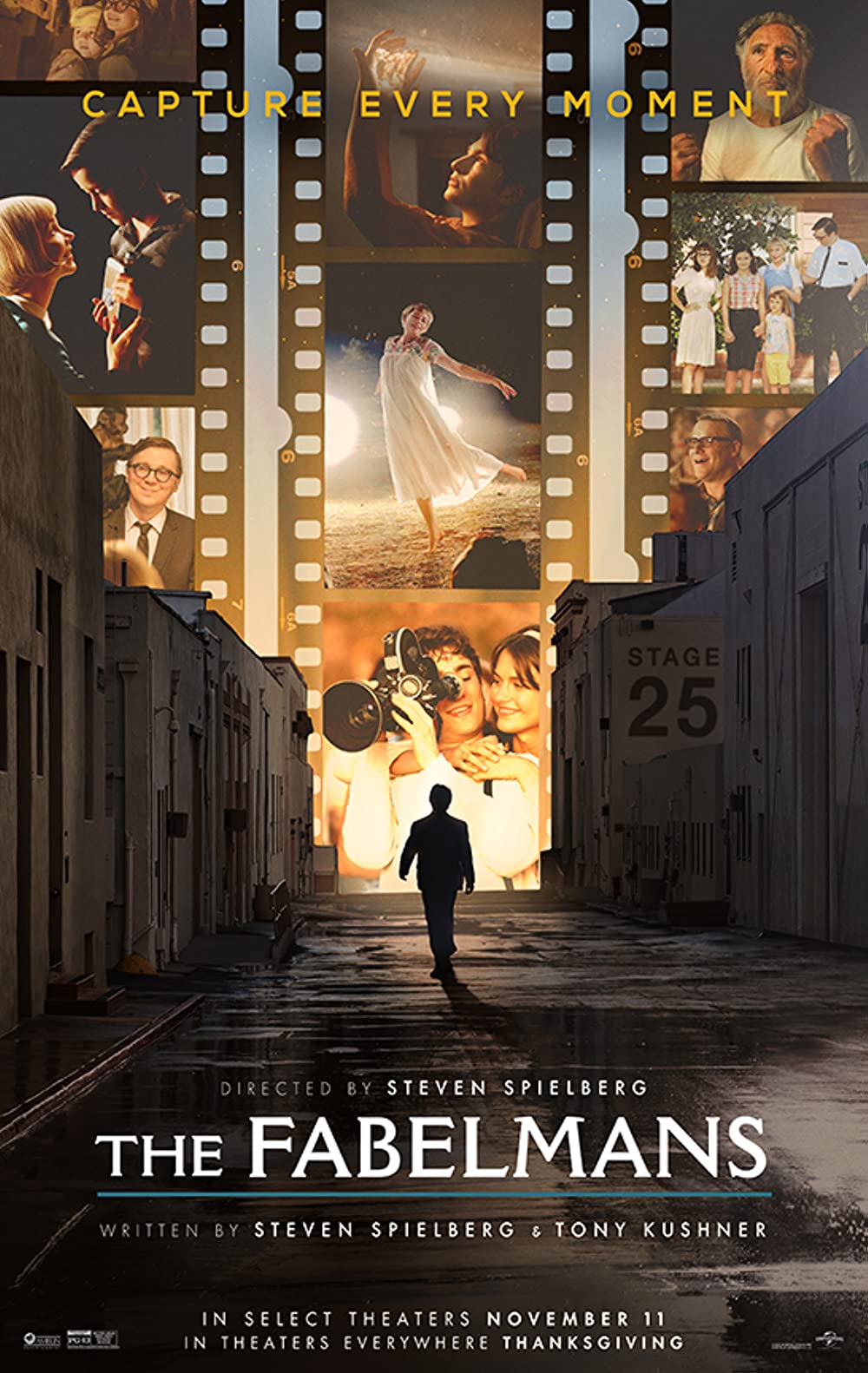 After watching The Fabelmans, I wondered what certain directors’ childhoods might look like. I imagine Martin Scorsese had a nanny who was also a hitman. Baz Luhrmann rarely ate food that wasn’t laced with LSD. George Romero constantly buried his friends on the beach. Quentin Tarantino definitely tortured animals. Stanley Kubrick was the kid in The Shining. And Steven Spielberg? For sure a kid with a video camera at all times, maybe even a clapboard tucked into his belt. The Fabelmans shows that video camera and more.

Spielberg’s analogue is Sammy Fabelman (Gabriel LaBelle). We first meet young Sammy as he is being coerced into a movie theater by his parents, Burt (Paul Dano) and Mitzi (Michelle Williams) to see The Greatest Show on Earth. Sammy is scared of seeing giant people on screen and parents assure him that they aren’t really that big. Once inside, Sammy is transfixed by what he sees on screen, instantly falling in love with moving pictures. This could be the end of the story, one quick anecdote to explain Spielberg’s love of film, but Spielberg is a better storyteller than that.

Back home, Sammy tries to recreate the train wreck scene from the movie. While Burt scolds Sammy for not taking care of his trains, Mitzi encourages Sammy, lending Sammy Burt’s 8MM camera. After a successful recreation, Sammy starts making films with his three sisters, gradually working out how to do different kinds of effects and clearly having fun. Sammy has clearly found his calling, much to the chagrin of his computer-building father and delight of his pianist mother. Then, his father gets a job offer in Phoenix, Arizona and the family moves there, taking with them Burt’s best friend and business partner Bennie (Seth Rogen).

It’s in Phoenix that the film really gets into the meat of Spielberg’s childhood story. After several years of honing his craft, now-teenage Sammy is making complex, elaborate films. As a Boy Scout, Sammy figures he can earn his photography badges through making films and enlists his entire troop in his projects. He also captures on film a family camping trip, one that inexplicably includes Bennie. It is through all these films that Sammy discovers how powerful film can be. More than just showing the things that are happening, Sammy realizes he can manipulate how audiences perceive what they are seeing and also that film can also capture things that weren’t intended to be seen. This is all classic Spielberg and, yes, we are being manipulated by him.

One more promotion for Burt, and the family is once again on the move, this time to Northern California…this time without third-wheel best-friend Bennie. Here, we get a couple more fables in the form of Sammy dealing with being bullied at school for being a Jew, Sammy navigating his first romantic relationship with a devout Christian, and Sammy grappling with his parent’s relationship falling apart. That’s a lot of crap for a seventeen-year-old to deal with and he finds his way through it all with film.

All of these small stories (and a couple others) add up to a solid narrative explaining why Spielberg is the way he is. At no point does the film ever feel trite or that Spielberg is indulging himself, rather that Spielberg keeps the perspective that he’s trying to entertain an audience. The story flows quite nicely, there are heroes and villains, and we feel for Sammy throughout his childhood. I also quite enjoyed LaBelle’s performance, who really sells us on every emotion Sammy experiences. Plus, there are a couple of scenes stealing moments from supporting roles in Judd Hirsch (Sammy’s uncle) and the Christian girlfriend (Chloe East).

If I was going to pick one director who could pull off making a movie about themselves, I’d pick Spielberg. I’d be lying if I said I wasn’t skeptical about going into The Fabelmans because how could I not be? It’s blatant narcissism. But nobody is better than Spielberg at crafting a story and he proved it again with The Fabelmans. I even would have been okay if he showed young Sammy with that video camera tucked into a holster on his belt.

Rating: Don’t ask for any money back, which is what we expect from Spielberg.